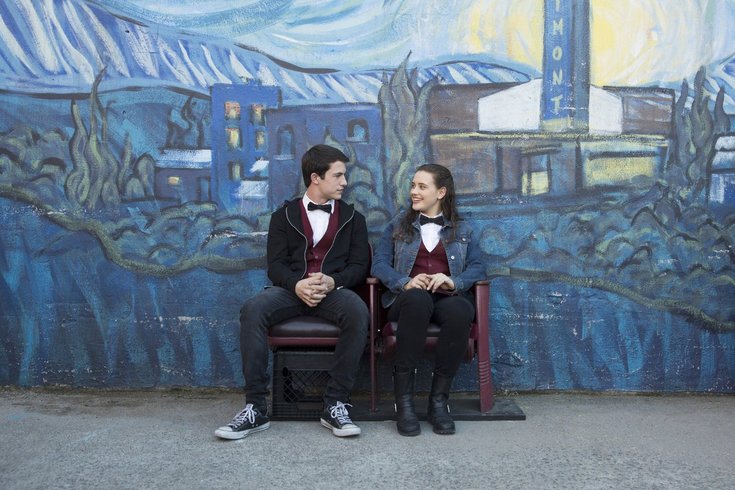 Pictured here from season one of Netflix's '13 Reasons Why' are Dylan Minnette, left, who plays Clay Jensen, and Katherine Langford, who plays Hannah Baker.

Netflix announced Monday that "13 Reasons Why," a drama centered on a 15-year-old girl’s suicide, will return for a second season.

For Drexel University’s Guy Diamond, who directs the university’s Family Intervention Science unit and is an expert in youth suicide, the news – and the show itself – is a double-edged sword within the mental health community.

Though "13 Reasons Why," based on a 2007 novel by Jay Asher, has been praised for its binge-worthy production value and realistic portrayal of modern teens, it has received extensive criticism for its graphic depictions of rape and suicide, which many critics argue glamorize teen suicide and could inspire copycat deaths among depressed and troubled young people.

Nonetheless, “13 Reasons Why” is one of Netflix’s most watched series and most tweeted about of 2017, making the public conversation about adolescent suicide more mainstream than ever before.

"Vulnerable kids who are bullied, isolated, looking to cope with their distress see a show like this and say, ‘Wow, suicide looks pretty glamorous.'"
– Guy Diamond, Drexel University

“I think there are some strengths and some worrisome weaknesses about the program,” Diamond said in an interview with PhillyVoice on Thursday. “As a preventionist, I’m seeing the show as an opportunity to reach and educate both kids and parents, but I didn’t get a feeling that the filmmakers had that kind of social consciousness about it.”

With the opportunity to right some of the wrongs made in season one, Diamond addressed some of the show’s problematic aspects and how it could better stick to media guidelines on depicting suicide.

One issue for Diamond arises with one of the first images viewers see as the series begins, the locker of posthumous narrator Hannah Baker, adorned with notes and pictures placed by students following her suicide.

“It sensationalizes the death,” Diamond said. “Kids could think they will finally receive the love and admiration they never got when they were living. Vulnerable kids who are bullied, isolated, looking to cope with their distress, see a show like this and say, ‘Wow, suicide looks pretty glamorous.’”

Before killing herself, Hannah, played by actress Katherine Langford, records 13 tapes explaining who and what are to blame for her death, blackmailing each person to listen and, in turn, suffer along with her. Diamond noted, however, that he has seldom worked with adolescents who name revenge as a motive for suicide.

“We just finished a program with 150 suicidal kids, and not one of them said revenge was the motive,” Diamond said. “They report feeling disconnected, like they don’t belong. They’re in tremendous pain and humiliation that they want to escape from.”

The focus on Hannah’s tape narrative also detracts from the mental health problems that contribute to suicide.

“On the upside, a lot of kids who are not vulnerable watch this show, and I think it really captured their imagination about bullying, about kids at risk, about mental health issues,” Diamond said. “It sort of cracked through a little bit of the stigma around mental health. A lot of kids’ eyes have opened.”

When it comes to one of "13 Reasons Why's" most gruesome scenes, Hannah’s death, Diamond said the scene could have two kinds of effects on at-risk adolescents: It could either inspire them to carry out a potential suicide or deter them from the act entirely.

“There’s a lot of debate about whether they needed to show the death,” Diamond said. “Could they have not shown the actual cutting and gruesome death? Artistically, probably. There are lots of ways to imply that.”

In Philadelphia, Diamond and his colleagues are at work to continue funding and staffing Drexel’s family intervention clinic, which treats suicidal adolescents.

“There’s just a lot more that can go on to prevent suicide attempts,” Diamond said. “I would like to see more therapy and more resources around the show – commentaries, interviews with experts, interviews with kids who have really been through this. De-glamorize it and give it more reality.”