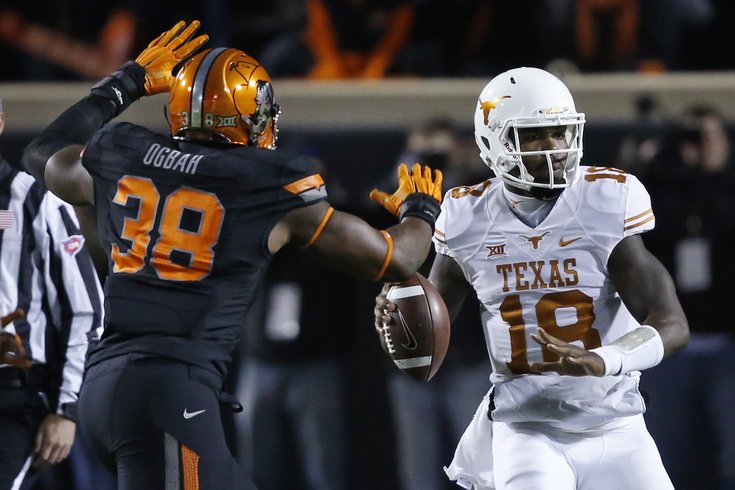 Emmanuel Ogbah had 24 sacks the last two seasons, and he could fall to the third round?

The Eagles have good defensive end talent and depth, with Vinny Curry, Brandon Graham and Connor Barwin all in place. Defensive end isn't exactly the most glaring need on the team, however, as we were accustomed to seeing in the old Andy Reid days, the Eagles could continue loading up on "fastballs."

Here are five defensive ends who could make sense for the Eagles:

Here's Ogbah working against Florida State's professional offensive line a year ago, when he had six tackles, three sacks (one didn't count), and he got his hands on two passes:

So how exactly can the Eagles get this guy if they don't pick until the third round (after they get their quarterback at pick No. 2)? According to Lance Zierlein of NFL.com, Ogbah could drop to the third round.

Ogbah has some of the best production you'll find at the defensive end spot over the last two seasons, but that might not save his draft stock. Ogbah tests well, but doesn't play like a "bendy" edge rusher and his effort level is uneven. Three teams confirmed that he carries a grade of Rounds 2-3 and it's entirely possible he drops to the third round.

I don't see that happening, but if it did, he'd be very hard for the Eagles to pass up.

Despite missing three games, Nassib led the nation with 16 sacks in 2015 and his draft status has skyrocketed as a result. At 6'7, 277, Nassib has excellent size. In the past, Jim Schwartz had good 6'6 pass rushers in Mario Williams and Kevin Carter. Curry (6'3), Graham (6'2), and Barwin (6'4) don't have that kind of height, so it will be interesting to see if Schwartz will prefer varied sizes and shapes along his defensive line.

While Nassib had 16 sacks in 2015, he was a "one-year wonder" who had 1.5 sacks over the rest of his career. His athleticism also does not match his production, so NFL evaluators will have to be careful not to overvalue his impressive 2015 stats. If Nassib were to slip to the third round, I could see the Eagles having interest.

My friend Tommy Lawlor of IgglesBlitz.com is an App State alum and, therefore, biased, but he likes Blair as a fit in Jim Schwartz's defense as the #NextTrentCole. Blair was the Sun Belt Defensive Player of the Year in 2015 when he had 7.5 sacks and 19 tackles for loss. At 6'2, Blair's short stature could turn some teams off, so he could be available in the middle rounds as a rotational defensive lineman.

Nicolas often could not hold the point of attack at Virginia Tech in the run game as a 235-pound defensive lineman, and probably shouldn't have been asked to. In the NFL, he'll have no chance as he'll often be battling offensive tackles outweighing him by around 100 pounds. However, he is a very good pass rusher with 35 1/2" arms who gave OTs competing at the Senior Bowl fits all week with his speed off the edge.

In Jim Schwartz's wide nine looks, Nicolas could be very difficult for opposing tackles to deal with when given a lot of space to work. He could be an interesting fit as a situational pass rusher.