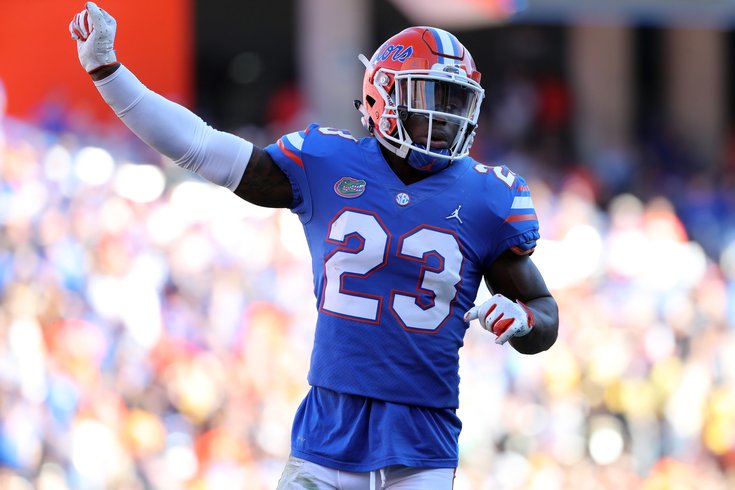 Florida's Chauncey Gardner-Johnson could be an eventual replacement for Malcolm Jenkins.

Leading up to the draft, we've been taking a look at each of the Philadelphia Eagles' positional groups, and determining if the Eagles are likely to select a player at that position with one of their seven picks in the 2019 NFL Draft, as well as note some players who make sense.

Today we'll finish out the series with the safeties.

Drafting a safety in the first round -- as in, drafting a player who played safety in his first year with the team -- is something the Eagles have literally never done. Ever.

The Eagles have a long-term need at safety, as Malcolm Jenkins is entering his 11th season and Rodney McLeod is playing in a contract year. However, in 2019, their starting safeties are set.

If there were a top 15 type of player who fell to 25, you could make an argument for the Eagles snapping him up. However, in my view, that guy doesn't exist in this draft. There have been a few safeties mocked to the Eagles in the first round, like Mississippi State's Johnathan Abram, Delaware's Nasir Adderley, and Florida's Chauncey Gardner-Johnson, who very well could be first-round picks (doubt it on the Adderley and Gardner-Johnson), but the better value on guys like that is in Round 2.

This year's safety class is loaded with guys who should be taken on Day 2 of the draft, and the Eagles could have their choice of a number of appealing options.

Here are some safeties who make sense for the Eagles

Abram is a player who has commonly been given to the Eagles in the first round of mock drafts. I don't see much in the way of separation between him and some of the other safeties below who can be had in Round 2.

I do like Abram's game, and what really stands out is that he is a very tough, confident, physical player who looks to deliver big shots whenever given the opportunity. A highlight reel:

Unfortunately, what highlight reels like that don't show are the missed tackles as a result of trying to deliver the knockout blow, and Abram has plenty of those. For example, cfbfilmroom.com had him down for 12 missed tackles in 2017, though he did clean clean that up a bit in 2018 (when he had 5).

Abram's potential fit in the Eagles' offense would be interesting. In the short term, you'd want to get him on the field immediately, I'd imagine, which would mean a shift to heavy utilization of three-safety sets. But again, the value in Round 1 just isn't there for me.

Rapp is an all-around good player who tackles well, makes plays on the football, and can move around from one position to the next. In the highlight reel below, what stands out to me is his ability as a pass rusher. He's dipping and bending around the edge like a polished defensive end on one sack, and he exposes a 300-plus pound right tackle in space on another.

Rapp is just a really good football player with the versatility to handle a lot of different assignments, which is obviously something that Jim Schwartz has repeatedly said he values in his defense.

Gardner-Johnson played the "Star" position in the Florida defense, which the follow video describes as "a nickel corner on steroids," who toggles back and forth between corner, safety, and linebacker.

That is a role similar to that of Jenkins in the Eagles' defense, and Gardner-Johnson is very logical successor.

As we note here constantly, Schwartz likes his safeties to have cornerback experience in their backgrounds, and that's true of Thornhill, who moved to safety as a senior at Virginia.

Thornhill was also a very productive player in college, which is something the Eagles seem to be prioritizing over the last three drafts. As you can see, he gets his hands on a lot of footballs:

Like Thornhill above, Savage is a highly athletic safety, as he ran a blistering 4.36 at the Combine. Savage is also thought to have a high football IQ, toughness, and ball-hawking skills. A highlight reel:

The downsize is that he's a smaller safety, which will turn a number of teams off, but doesn't seem to bother Schwartz. Savage's skill set reminds me a little of Avonte Maddox. He could fill a role similar to that of Malcolm Jenkins, as something of a field general capable of playing safety and slot corner.

Hooker played a similar version at Iowa that Gardner-Johnson (above) played at Florida, in that he played some slot corner, safety, and linebacker. In that sense, once again, he would an eventual replacement for Jenkins.

Thompson is a tall safety with excellent range and good ball skills. While he's not a thumper, he is very good in coverage, and would make sense for the Eagles in the McLeod role as a single-high safety.

Redwine was a corner at Miami for two seasons before he moved to safety. He has good man-coverage ability against tight ends, he is a good blitzer, and he is a physical run defender. A highlight reel:

He also had a very good showing at the Combine:

Redwine is the type of confident player that Schwartz should love.

Johnson was the leader of Miami's defense and a team captain. In 2017, he was a ball hawk, picking off 4 passes and forcing 3 fumbles while also leading the team with 96 tackles. In 2018, those numbers fell off a bit, as he had 2 picks and 2 forced fumbles. Johnson is a more-than-willing tackler, who will also deliver the occasional big hit, but he has size and speed limitations.

Denis is a smaller safety prospect, but as Schwartz has shown, he doesn't care much about size at that position. While his production was down in 2018, Denis had 88 tackles, 7 INTs, 10 pass breakups and 2 forced fumbles in 2017.

Denis is far from a punishing tackler, and you wouldn't want him playing much in the box, but his skills translate well to the McLeod role in the Eagles' scheme.