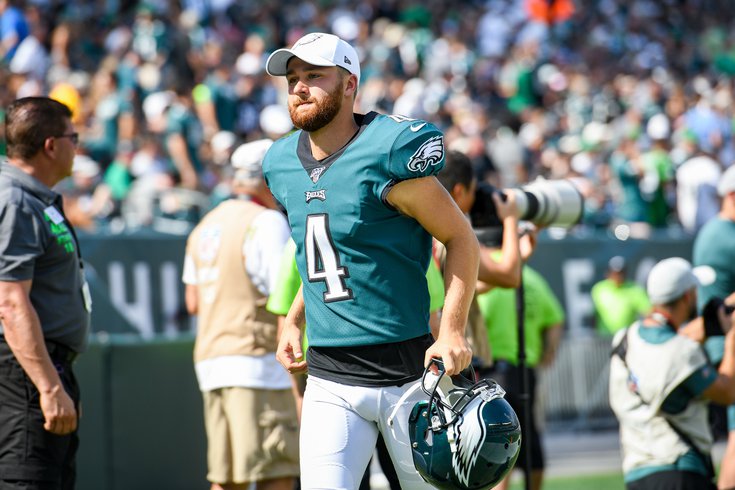 Over the last few weeks, we've been taking a look at every player on the Philadelphia Eagles' roster, and how they fit with the team heading into training camp. Today we'll finish off the series with the specialists.

First, a look at the depth chart at the specialist positions:

After a very good start to his Eagles career in which he made 85.9 percent of his field goal attempts (74 of 88 in the regular season, and a perfect 11 of 11 in the playoffs), many of which came in extraordinarily clutch situations, Elliott was rewarded with a lucrative five-year contract worth a little over $19 million.

There was never any question that Elliott would be back in 2021, as it would cost more to cut him than keep him, but certainly, he needs a strong bounce back season to keep his job in 2022.

Because we were sometimes confined to certain areas of the practice field and could not move as freely as we otherwise normally would, I did not track Elliott's kicks during camp last year. I'll (hopefully) be back on that beat this year.

The Eagles had a decision whether to tender punter Cameron Johnston as a restricted free agent this offseason at $2,133,000, and they made the correct decision not to. Johnston subsequently became an unrestricted free agent and signed with the Houston Texans on a three-year deal worth $8 million. That's crazy, but good for him!

Siposs was a Australian rules footballer, and a pretty good athlete, at least for a punter. Here he is in action:

After undergoing three shoulder surgeries, Siposs gave up on Australian rules football and he moved on to something of a fallback plan, which was to become an American punter. He enrolled at Auburn, and became their starting punter as a sophomore at the age of 25.

In 2020, Siposs had interest from a few teams as an undrafted rookie free agent, and he chose to sign with the Detroit Lions. He competed with 2019 UDFA Jack Fox for the punting job in training camp, a battle that Fox won, but was apparently close. Obviously, in 2020, there were no preseason games for Siposs to show what he could do in live NFL action.

Fox would go on to be one of the more effective punters in the NFL, according to these nerds who track punters (also note where Johnston is here):

ProFootballFocus agreed, as they had Fox as the highest-graded punter in the NFL last season. Still, the Lions thought enough of Siposs to keep him on their practice squad all season long.

Now 28, but still inexperienced, Siposs is currently the only punter on the Eagles' roster. You couldn't give me a punter battle to cover in training camp, Eagles? Really? Like not even some scrub to push this guy? I really don't ask for that much.

Back in the days when I went to extreme lengths to do stuff that nobody else did, I used to watch every Jon Dorenbos long snap of the season, and note the bad snaps, with accompanying screenshots. I'm less psychotic these days, so I really can't say how good or bad of a season Lovato had.

Lovato made the Pro Bowl in 2019. In 2020, he had his first obviously bad snap of his Eagles career (that I can think of, anyway) against the Cardinals, which resulted in a missed PAT. Obviously with long snappers, we only ever notice the mistakes, but Lovato seems like a reliable enough specialist.

It almost felt like there was an invisible fishing line wire that stretched across the field at the 20 yard line that Boston Scott would trip over on all his kick returns in 2020. The Eagles need better kick return production out of Scott in 2021. He'll be pushed by Jason Huntley, who was not in Eagles camp last year, but will get a chance to show what he can do this summer. Recent signing Michael Walker also has 18 career kick returns, and a small handful of punt returns with Jacksonville.

The top two punt returners in 2020 were Greg Ward and Jalen Reagor. The Eagles typically felt more comfortable putting the completely unthreatening Ward back to return punts over Reagor, because they trusted him more to actually field punts. Reagor was a muff risk, but obviously, he provided the threat of a big play, like we saw against the Packers.

Ward and Reagor will likely be the two primary punt returners once again in 2021. DeVonta Smith can also return punts, but the bet here is that the Eagles will be hesitant to risk injury by playing him on special teams.