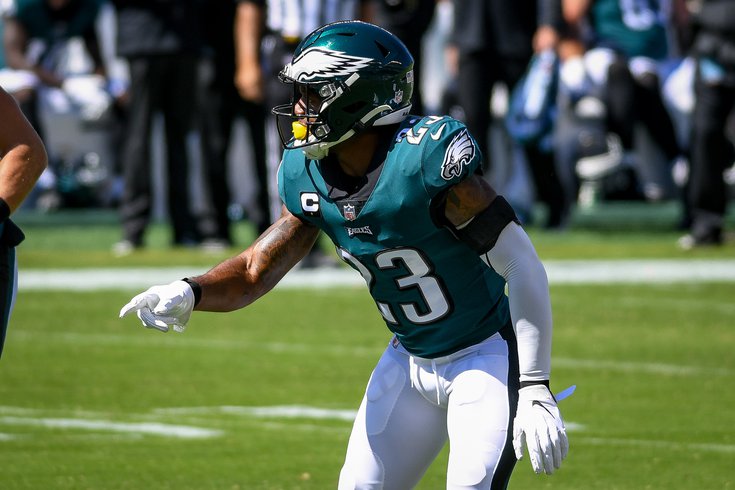 Rodney McLeod during the Philadelphia Eagles game against the LA Rams at Lincoln Financial Field in Philadelphia on September 20, 2020.

Over the last few weeks, we've been taking a look at every player on the Philadelphia Eagles' roster, and how they fit with the team heading into training camp. Today we'll look at the safeties.

First, a look at the depth chart at safety:

Harris was an undrafted free agent of the Vikings out of Virginia who worked his way into Minnesota's starting lineup. He has played in 81 games, starting 47. In 2019, Harris picked off six passes, which was good for a share of the league lead. He added a seventh pick in the postseason, victimizing Drew Brees.

The Vikings franchise tagged Harris during the 2020 offseason, and he made $11,441,000. Had the Vikings tagged him again, it would have been 120 percent of that total, or $13,729,200. They made the obvious decision not to do so. Harris clearly did not find a strong market for his services during free agency this offseason, as the Eagles were able to land him at the reasonable cost of $5 million on a one-year deal. The downside is that he will turn 30 in October, which is not ideal for a team in rebuild mode.

Harris had a strong season as a tackler in 2020, as he was third on the team with 104 of them. However, he seemed to struggle in coverage, as he allowed a passer rating of 118.1 on balls thrown his way, according to pro-football-reference.com. For context, the Vikings were a mess at corner in 2020, which no doubt affected Harris' play. In 2018, he allowed a passer rating of 58.1, and an outstanding passer rating of 44.2 in 2019. A highlight reel from Harris' impressive 2019 season (You'll have to click "Watch on YouTube" to see it because the NFL restricts embedded videos for some idiotic reason):

Harris will start at one of the safety spots this season, barring something unforeseen.

After tearing another ACL in 2020, especially late in the season against the Saints on December 13, the question will be whether McLeod will be ready for the 2021 season in time, and even if so, will he look like the slower 2019 version again?

When the first practice of training camp begins on July 28th, it will mark something close to seven and a half months from the day of McLeod's latest ACL tear. McLeod could avoid the PUP list to start camp if the team wants him to at least be a bystander on the field during practice, getting mental reps in a new defensive scheme, but it's highly unlikely he'll be a full go, at least initially.

To be determined if McLeod will be ready to play Week 1 in Atlanta.

We published a deep-dive look at Wallace's rookie season last week, and the Cliff's Notes are as follows:

It should probably be considered a disappointment if Wallace cannot beat out guys like Marcus Epps and Andrew Adams for the third safety spot in his second season, but in my opinion, in a small sample size, he showed enough as a rookie that he can play in the NFL, and I like his chances to earn that role.

Epps' best trait was his ball skills. He appeared in 14 games, starting five, but he only played 363 snaps, or 33 percent of the team's defensive snaps. In that limited action, Epps had 47 tackles, two INTs, and four pass breakups. Those are pretty good numbers, and when I found his pass breakups, they were legitimately nice plays.

On the downside, tackling is a major concern area.

Epps is purely a deep safety, as he's not going to add much value close to the line of scrimmage, unless he is matched up against a tight end man-to-man in coverage. Even as a deep safety, while he has demonstrated good ball skills on occasion, there were times in which he "bit the cheese," in which he either committed to an underneath route leaving the deep route open, or took a false step as a result of guessing on a receiver's route, leaving that receiver open.

For some defensive coordinators, he's an automatic "no" from a roster configuration standpoint, because of his tackling deficiencies. Jim Schwartz, who prioritized coverage safeties over thumpers, was willing to forgive a few missed tackles here and there, but only to a point, and even Epps seemingly got benched by him after a poor tackling performance against the Steelers.

Epps is heading into his third year in the NFL, and his ball skills will give him a chance to make the roster, especially since he was drafted by a Mike Zimmer team, and Gannon's scheme will likely have Zimmer influence.

But if he's going to survive long-term in the NFL, he's going to have to figure out a way to become a more physical, reliable tackler.

Adams was originally an undrafted free agent of the Giants out of UConn, who eventually landed with the Bucs and went along for the ride on their Super Bowl run. He also spent a training camp with the Detroit Lions in 2019.

Over his five year career, Adams has played in 73 games, with 32 starts. He is a veteran safety with significant game experience who can start in a pinch.

I considered doing a deep-dive look at Arnold's 2020 season, and even though I did them on guys like Sua Opeta and Josiah Scott, I felt that looking closely at Arnold's season might require me to seek professional help. I will say that I did notice Arnold peripherally while watching Epps and Wallace in the two games Arnold played Weeks 16 and 17 against Dallas and Washington, and, uh, he wasn't great. A lot of missed tackles.

Arnold had 10 tackles and one PBU in 2020. He has limited size and athleticism, but he's got some pop, and he showed good ball skills in college. I like his chances for the practice squad once again.

Four snaps in the regular defense, 63 on special teams, did not register any stats.