Report: Zach Ertz will be back with the Eagles — at least for now 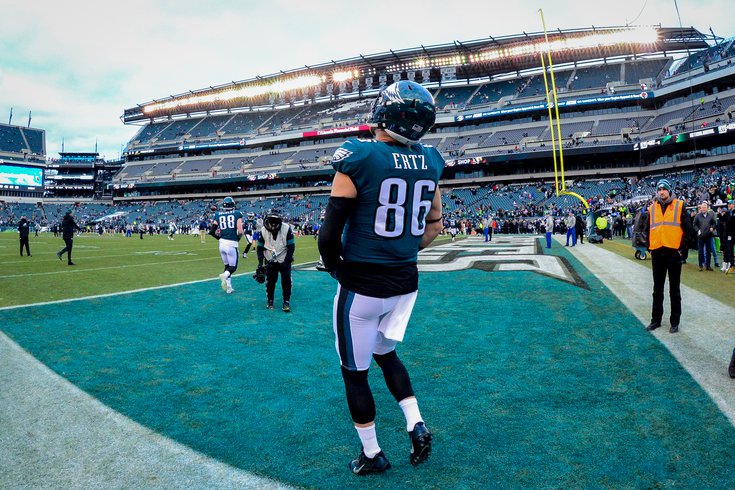 After months of trade speculation that included what seemed like a tearful goodbye from Zach Ertz to the city of Philadelphia, it's looking like the veteran Eagles tight end might not be done just yet. With a week before the Eagles take the field for their first training camp practice of the Nick Sirianni Era, a new report from WIP's Howard Eskin suggests that Ertz will indeed be back with the Eagles, at least for the time being.

Latest on #Eagles Zach Ertz. I know hear there is a great chance Ertz will be on team at start of season. Been told Zach will be there at start of training camp Tuesday. Zach has been working out in team facility for close to last 2 weeks with teammates. He’s over the issues.

Reports had suggested that Ertz was going to sit out of training camp while the team looked for ways to trade him. And if they couldn't, the belief was that they would simply cut ties with the 30-year-old three-time Pro Bowler in an effort to rid themselves of his $8.5 million salary in 2021. Now it appears Ertz will be on the field next week after skipping minicamp earlier this summer. Moreover, Eskin, who it's worth noting is also employed by the Eagles as a gameday sideline reporter, says that Ertz has already been at the facility working out with his teammates and is "over the issues," meaning that he's likely no longer looking for a new contract, one that he's reportedly been after for a couple years now.

All of that can be the case, and Ertz can still be playing elsewhere when the season starts in a month and half. That's what makes Eskin's report so interesting: he thinks there's a "great chance" Ertz is still on the team when the season begins, something no one thought would be the case when last season ended and Ertz was left in tears lingering on the sideline, wondering if he had just played his last game in an Eagles uniform.

Suddenly, there's a bit of momentum that he could be back in midnight green next season and be playing a meaningful role in Sirianni's offense alongside Jalen Hurts.

Ertz had a down year in 2020, the worst statistical season of his career, catching just 36 passes for 335 yards (9.3 YPC) and just one touchdown. The overall abysmal state of the team didn't help matters at all — nor did the fact that he missed a handful of games with an injury — but he has been trending down each of the last couple of years and is on the wrong side of 30.

The good news is, the Eagles seemingly have a capable replacement in Dallas Goedert, but it probably wouldn't hurt to have a more veteran presence among the Eagles skill position players, and Ertz certainly qualifies as that.

Beyond that, if the Eagles keep Ertz, he could be dangled out to a contender ahead of the trade deadline, or even be sent to a TE-needy team after they suffer a big injury. Just because he's out on the field next Wednesday hardly means that he's here to stay. For those who were hoping his time in Philly wasn't yet over, this is at least a step in the right direction. But it hardly sounds like the end of the Ertz saga.

Zach Ertz would lose 40K per day if he didn’t report to #Eagles training camp. He intends to report. Nothing else has changed.