So the Eagles are playing a RG at LT, and a LT at RG, because... continuity? 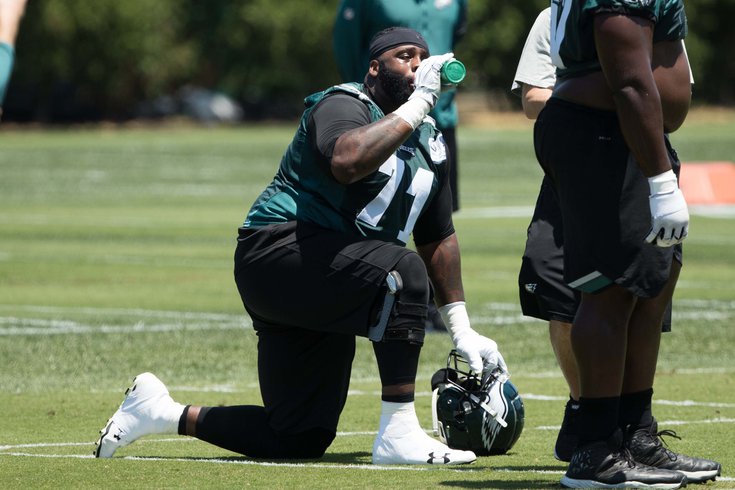 To bring you up to speed in case you haven't been following the Philadelphia Eagles and their offensive line mess over the last week:

• Thursday, August 27: Starting LT Andre Dillard injured his right bicep, which will cause him to miss the 2020 season. The obvious replacement for Dillard is Jason Peters, the sure-fire Hall of Famer who has played LT in the NFL for a decade and a half, and the last 11 seasons for the Eagles.

• Saturday, August 29: After a day off on Friday, in a press conference with Philly reporters, Doug Pederson confirms Dillard's injury, and only goes as far as to say that Peters is "in the conversation" to play LT. Wait, what?

Later, a report emerges from Jeff McLane of The Inquirer, stating that Peters, who re-signed with the Eagles in July to replace the injured Brandon Brooks at RG, would not be willing to move back to his old LT spot without a hike in pay.

In practice, Matt Pryor is the new first-team LT, with Peters remaining at RG.

• Sunday, August 30: The Eagles hold a full-team scrimmage at Lincoln Financial Field, and Pryor, playing LT, has the practice equivalent of "The Winston Justice Game," when Josh Sweat absolutely wrecks him for two hours.

After a day off on Monday, Pederson once again spoke with reporters on Tuesday, and naturally, he was asked about the Peters report, and whether it undermines his authority if a player is asked to play a different position, but refuses.

"First of all, I don't understand where some of these reports are coming from," Pederson said. "Jason Peters for us has done an outstanding job at right guard. He's comfortable at right guard. We have some options at left tackle that we're working through over there.

"It doesn't undermine anything. The fact that Jason has really embraced a new role for him, he's done it well. He's playing at a high level in what we've asked him to do there and he's comfortable.

"As you guys know, it's hard to disrupt too many positions with that offensive line. We've got a few more days here before we really get into regular season week to find out who that left tackle will be. But got some options over there."

At left tackle, the tale of the tape:

When challenged on the logic of "disrupting too many positions" along the offensive line, Pederson stuck to his message.

"The fact that (Peters) has come in here and done a great job for us at right guard, he's solidified that right guard," Pederson said. "He's worked well with Lane when Lane has been out there. He's working great with Kelce. Kelce has a comfort level there with him.

"The thing is if we end up moving too many spots, especially this late into camp, it can disrupt some timing up front. Those guys need to be in sync. For us to go out and put our best five up there, that's the plan, that's where we're going, that's where we're headed. We're going to get them all ready to play."

In that sense, there's no disagreement on who should be on the field. It's just that the Eagles are playing their RG at LT, and their LT at RG. I don't know. Maybe Pryor's two practices at LT make for better continuity than Peters' decade and a half there. ¯\_(ツ)_/¯

The reality is that it's only a matter of time before they pay Peters to play LT. Peters has the leverage to ask for more money, and there's little doubt that he's going to get it. The Eagles aren't going to torpedo the 2020 season, and possibly get their $128 million asset at quarterback killed, to save a few million dollars. The sooner they get it done, the sooner they can work toward perfecting the timing along the offensive line that Pederson mentioned.