The cutouts cost $100 a piece and will be available on a first-come, first-served basis 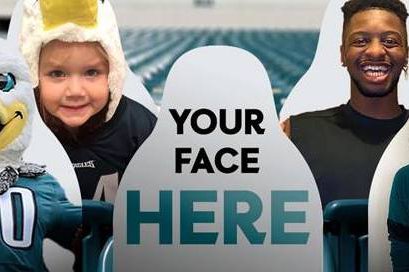 Eagles fans will be able to purchase cardboard cutouts, which will be placed in the stadium seats for home games. The cutouts will cost $100 and will be available on a first-come, first-served basis.

The Philadelphia Eagles may not be able to capture fans' energy at Lincoln Financial Field this season — but at least they can capture fans' faces.

Since spectators are not allowed to attend games due to the coronavirus pandemic, the team plans to enliven the field with cardboard cutouts of fans' faces throughout the stands. Each cutout costs $100 a pop and the net proceeds will benefit the Eagles Autism Foundation, which funds research and treatment for the developmental disorder, the team announced on Tuesday.

General sale for the cutouts begins on Thursday at 8 a.m. and will be available on a first-come, first-served basis. Season ticket holders can purchase cutouts in advance until Wednesday. The cutouts, which will be printed by RICOH, will be initially placed on the lower-end zones and then spread out throughout lower seating in the stadium.

Want to represent the whole Eagles-loving family at the games? If fans purchase multiple cutouts in a single order, the cutouts will be seated next to each other. Fans will not be allowed to request their seat, but the team will let them know where the cutout is located.

In order to take the best photo possible for the cutout, there are a few tips to keep in mind. The photo needs to be taken by another person with a blank wall in the background. (Selfies are not advisable.) Also, the photo should be taken from the waist up with arms at the side. There can only be one person in the photo. Check the team's website for the full list of guidelines.

The cutouts will be recycled at the end of the season and fans will not have access to them, the team said.

The Eagles confirmed last week that fans would not be able to attend games until further notice this season. The team opens the home portion of their schedule on Sept. 20 against the Los Angeles Rams. Their season opener against Washington at FedEx Field in Landover, Md. will also be without fans.