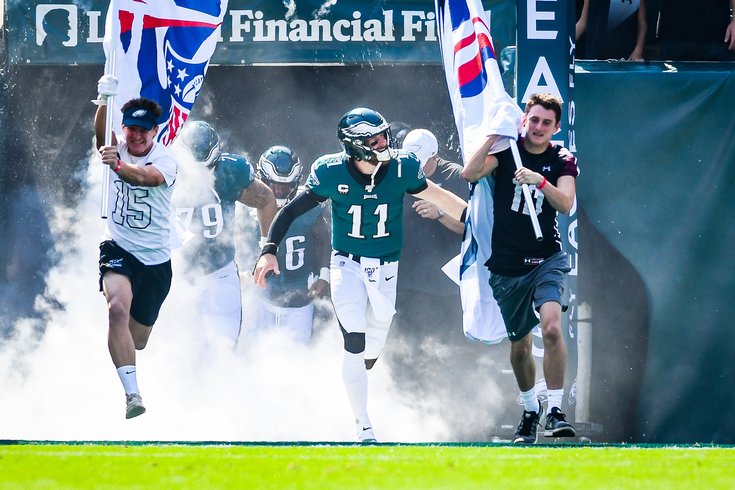 Carson Wentz runs out of the tunnel before the Eagles faced the Lions at Lincoln Financial Field.

If you're an Eagles fan, you probably remember some controversy over player rankings earlier this summer. And you'd be right to.

That's because Eagles quarterback Carson Wentz was somehow left off the list of the NFL's Top 100 players, as voted on by other players around the league. The Eagles had five players in total make that list, but not Wentz, and not star right tackle Lane Johnson. The highest-ranking Eagle was Fletcher Cox at No. 73.

When that list came out just over a month ago, our own Jimmy Kempski took a deserved shot at the process used to come up with that list.

Of course, Lane Johnson has a legitimate beef for getting snubbed as well, but really, who cares? Near the end of the season each year, some NFL reps come into locker rooms, and hand out sheets of paper where players can fill in their top 10 players. If I recall correctly, the Eagles barely even had anyone in the locker room the day they did it last year. It's such a lazy way to conduct a poll for something they put so much time into, production- and promotion-wise.

Perhaps if the full league voted — and, ya know, they waited until the entire season was played, when Wentz put a receiving corps full of practice squaders on his back — then the results might have been a little different. But that's how the list is compiled, and had Wentz been voted a Top 10 player, the complaints over how the vote was compiled probably would've been few and far between.

Still, lists like this are silly. But with practice now being closed to the media and there being a bit of a dead period before the 2020 regular season kicks off next Thursday, it's as good a time as any to take a quick look at another recent Top 100 player list.

This one comes courtesy of ESPN, and their process couldn't be any more different from the NFL's...

We asked a panel of 46 ESPN NFL experts to rate players based on how good they will be in the 2020 season in comparison to their peers. Emphasis was entirely on expectations for the upcoming season -- that means injured safety Derwin James won't make the list -- and predicting potential greatness, rather than past performance, career résumé or positional value.  [espn.com]

And, believe it or not, the results were similarly different, especially for the quarterback.

Sure, the Eagles got the same number of players inside the Top 100 (5), but Wentz and Johnson were both very much on this list. And, in this case, all five Eagles on the list were above No. 73, which was their highest overall ranking on the NFL's Top 100.

Before getting into any more breakdowns, let's take a look at where the two separate lists ranked the Eagles...

Some of the differences there are staggering, although the ESPN analyst rankings seem much closer to the truth than the NFL peer rankings.

Now, let's dive in and take a look at what ESPN had to say about some of the Eagles who did (and didn't) crack the Top 100. And we have to start at quarterback.

After going unranked in the NFL's Top 100, Wentz, who currently has the seventh-best consensus MVP odds according to TheLines.com, was the highest-ranking Eagle in ESPN's list. And, regardless of where you put him on the list, that certainly feels right. Sure, it's an eight-spot drop from his ranking a season ago (31), but there's always going to be some movement on these lists, and a slight fall like that is nothing eye-popping.

Here's more of what ESPN had to say about the Birds quarterback...

Wentz has added 13 pounds of muscle, is as agile as ever and seems perfectly comfortable and in command of Doug Pederson's system. He earned a good deal of respect in the locker room by carrying a depleted offense into the playoffs last season. Wentz should enjoy a statistical surge with an improved supporting cast around him. -- Tim McManus

Signature stat: Last season, Wentz became the first 4,000-yard passer in NFL history to do so without a 500-yard wide receiver, per Elias Sports Bureau.

What they are saying: "I've been thoroughly impressed. He has come into camp in tremendous shape. He's the leader of our football team. He is coaching up the young players, which is great to see." -- Doug Pederson, Eagles coach

You can argue that Wentz should be higher — or lower, depending on your own personal assessment of his play — but him landing at 39 doesn't seem all that surprising. Until, that is, you consider where NFC East counterpart Dak Prescott checked in.

The Cowboys quarterback, unranked a season ago, jumped all the way up to No. 20 overall, making him the sixth-ranked quarterback on the list. Wentz, meanwhile, was the tenth-highest quarterback on the list. The others ahead of him were Patrick Mahomes (1), Lamar Jackson (3), Russell Wilson (4), Deshaun Watson (10), Drew Brees (14), Prescott (20), Aaron Rodgers (23), Tom Brady (32), and Matt Ryan (37).

That being said, two of those quarterbacks were also voted by at least one ESPN analyst as the most overrated players on the list. One was Ryan, who checked in two spots ahead of Wentz, and the other was — you guessed it — Dak Prescott. Here's what ESPN's Jeremy Fowler had to say about Prescott's high ranking:

Fowler: Dak Prescott, Cowboys quarterback, No. 20. Prescott is a top-10 quarterback but listing him as the sixth-best -- ahead of Tom Brady, Aaron Rodgers and Carson Wentz -- and 20th overall is a bit rich. The reality is, if he were a top-20 player, the Cowboys would have found a way to pay him. Yes, his numbers were great last season, ranking in the top eight in QBR inside the pocket (67.7), outside (78.3) and under pressure (25.7). But inconsistent ball placement led to some rough games on big stages, and coaches leaguewide maintain other quarterbacks would do more with Dallas' talent.  [espn.com]

That should make Eagles fans feel a little better, but Wentz is the more talented quarterback and should've been higher than Prescott (and a few others on this list). That being said, if Wentz can deliver another full, healthy season — and have some actual NFL-quality receivers to throw to — it will be interesting to see where he winds up a year from now.

Meanwhile, there was little surprise at tight end, where Ertz saw his ranking drop 25 spots but still finished as the No. 3 overall tight end behind George Kittle (9) and Travis Kelce (17). The only other tight end to crack the Top 100 was Rob Gronkowski (99). Here's more on the 29-year-old tight end:

Ertz has more catches through the first seven seasons of his career (525) than any other tight end in NFL history, set the single-season record for most catches by a tight end in 2018 (116) and has led his team in receptions and receiving yards in each of the past four seasons. Yet he still doesn't get the same respect offered to Travis Kelce and George Kittle. Ertz was double- and triple-teamed for much of last season due to Philly's lack of weapons but should have a lot more room to work now that there are more playmakers on the outside to attract attention. -- Tim McManus  [espn.com]

One spot behind Ertz was defensive tackle Fletcher Cox, who, like Ertz, was the third-ranked player at his position, behind only Aaron Donald (2) and Chris Jones (29). Also, like Ertz, Cox saw his rankings take a hit, falling 20 spots to No. 49 overall. Here's more:

Coming off foot surgery, Cox was not himself for much of last season. Now healthy, he should be back to his game-wrecking ways. It will help to have Javon Hargrave and Malik Jackson by his side -- two gifted players in their own right. Their presence should drop the amount Cox is double-teamed at least a little bit. -- Tim McManus  [espn.com]

The next Eagle on the list hasn't even taken a snap yet for the Birds, but there are already big expectations. That's because it's big offseason acquisition Darius Slay. The former Lions cornerback saw his ranking improve 39 spots from 100 in 2019 to 61 in 2020. He was the 61st-ranked CB on the list behind Stephon Gilmore (7), Tre'Davious White (26), Jalen Ramsey (35), and Marshon Lattimore (54). That's some pretty good company...

Since 2017, 36 defensive backs have seen at least 200 targets as the nearest defender in coverage. Only Marlon Humphrey and Stephon Gilmore (both 49.2%) have allowed a lower completion percentage than Slay (51.8%), per NFL Next Gen Stats. His efficiency dipped a bit last season, but he was often asked to play straight-up man against the opponent's best receiver. The Eagles' scheme should be easier on him, and he'll get a boost from being in a new environment following a rocky relationship with Detroit coach Matt Patricia. -- Tim McManus

Rounding out the Eagles to crack ESPN's Top 100 was Lane Johnson, who saw his ranking climb as well, going from 95th overall to 71st. The 30-year-old vet was the sixth-ranked offensive tackle on the list behind David Bakhtiari (34), Ronnie Stanley (43), Tyron Smith (60), Laremy Tunsil (64), and Ryan Ramczyk (66).

Johnson has battled through some injuries in recent seasons but remains arguably the best right tackle in the game. Since 2016, when Doug Pederson became head coach, the Eagles are 36-17 with Johnson and 6-11 without him in the starting lineup. -- Tim McManus  [espn.com]

And finally, what about the Eagles players that didn't make the list, specifically Jason Kelce, who checked in at 94th on that NFL list but went unranked over at ESPN. Well, according to at least one of their experts, he was the biggest snub of all.

Kevin Seifert, national NFL writer: Jason Kelce, Eagles center. Sure, it's easy to overlook a center in this type of exercise. But Kelce has arguably been the best at his position over the past five years and was a 2019 first-team All-Pro selection. His athleticism makes him highly effective on screens and pulls, enhancing the Eagles' offensive flexibility. And at age 32, it's reasonable to think he can play at a high level for several more years.  [espn.com]

Do these rankings make up for those NFL rankings from earlier this offseason? Almost certainly not, as I expect Eagles fans will find plenty of flaws in ESPN's Top 100 as well. I look forward to hearing from you all.