For a change, the Philadelphia Eagles will have some players coming off of their injury report this week, as opposed to having players added to it. Meanwhile, the Chicago Bears only have one guy on their injury report, but a couple of important players on injured reserve.

• LT Jason Peters (knee): Peters is "week-to-week" with a knee injury. Rookie first-round pick Andre Dillard has filled in, and has gotten better each week he has played.

• LB Nigel Bradham (ankle): It'll be another week of Nate Gerry, Kamu Grugier-Hill, and T.J. Edwards. Personally, I thought Gerry had a pretty good game last Sunday against the Bills.

• WR DeSean Jackson (abdomen): It looks like the long-awaited return of DeSean Jackson will end on Sunday. Hallelujah, the Eagles will actually have a wide receiver on the field with some speed who can also catch the football.

Eagles’ WR DeSean Jackson, listed as questionable with an abdomen injury, is expected to play Sunday vs. the Bears, per source. Eagles also get back RB Darren Sproles and Miles Sanders.

• DT Timmy Jernigan (foot): The presence of Jernigan, even if he can only play a small role, would be a nice boost for a defensive tackle position that presently consists of Fletcher Cox and a couple of rookies the Eagles had to sign off other teams' practice squads.

Update: So is Timmy.

• S Andrew Sendejo: Broken record alert: If the Eagles cut Sendejo by Saturday, they will gain a 4th round compensatory pick in the 2020 NFL Draft.

Guys returning (no longer appearing on the injury list)

• CB Avonte Maddox: The Eagles' secondary is beginning to get healthy again, with Jalen Mills, Ronald Darby, and Avonte Maddox all returning from injury. 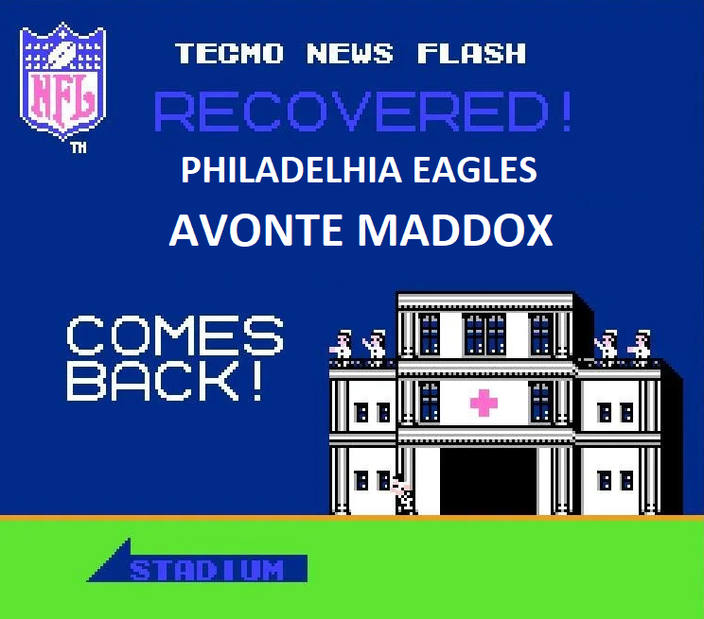 As the above picture shows, Avonte literally ran from the hospital back to the stadium.

• DT Malik Jackson (IR): Originally, the loss of Jackson hurt most when the Eagles forced obvious passing downs, as the Eagles didn't have a clear replacement for him in those second-and third-and-long situations. They have since moved Brandon Graham inside on those downs, with Josh Sweat (and maybe soon-to-be Genard Avery?) coming in at LDE.

• DT Hassan Ridgeway (IR): Ridgeway is the most recent addition to the Eagles' IR. The Birds added a pair of undrafted rookie free agents to their roster off of practice squads a week ago to replace Ridgeway and the ineffective Akeem Spence.

• CB Cre'Von LeBlanc (IR): LeBlanc is out with a Lisfranc injury. He was eligible to return to the active roster this week, but is not yet ready.

That's it. The Bears have one inconsequential guy on their injury list, though they do have a couple of important players on IR.

• DT Akiem Hicks: Hicks made the Pro Bowl last year. In his three full seasons with the Bears, Hicks played in all 16 games, collecting 116 tackles (38 for loss), 23 sacks, 5 forced fumbles , 3 recoveries, and 7 batted passes. He suffered a gruesome elbow injury against Oakland, and went on IR.

• RG Kyle Long: Long was the Bears' starting RG, but after some early struggles he went on IR with a hip injury. In our five matchups to watch, we covered this more in-depth, but converted defensive lineman Rashaad Coward is likely to start at RG in Long's place.