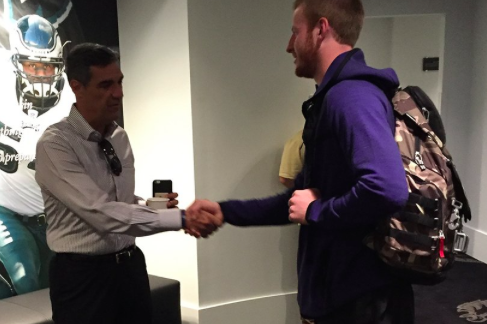 With the Eagles offseason program getting underway and the team ushering in a new coaching regime, the organization chose wisely on Monday to bring in Villanova head basketball coach Jay Wright to help instill the kind of championship atmosphere that led the Wildcats to an NCAA Men's Division I title earlier this year.

It was a thrill for me to spend the morning with the @Eagles today! Hometown proud! pic.twitter.com/Udc8xoz7Iz

Much of the focus lately has been on the simmering clash between Sam Bradford and the Eagles front office over the trade-up and selection of Carson Wentz in the draft, but Wright showed more interest in the coaching potential of Doug Pederson, whose arrival has rekindled his friendship with Andy Reid.

"I did pick [Pederson's] brain about a lot of things," Wright told Eagles reporter Alex Smith during an interview at the NoveCare Complex. "We were looking out over the practice field, watching the guys, talking about his influences in coaching. His ideas for the team. His challenges here. I think he's going to be very successful. He has a great feel for the personnel, the organization and the city of Philadelphia. They're three different things that have different dynamics and I think he gets it."

Wright also talked about the values that propelled Villanova's blistering run this season after several close calls in recent years.

"Our goal wasn't to win a championship. Our goal was to be pure and committed to each other in our process," Wright said. "If the result is a championship, great, but first we've got to be true to playing hard with great effort and playing for each other, being intelligent players...that was really what our goals were, and then the championship was a result of that."

Football isn't basketball and college isn't the pros, but Wright's words could signal a sea change in the philosophy of Eagles owner Jeffrey Lurie. After falling just short under Andy Reid five times during his tenure in Philadelphia, Lurie repeatedly stated in public, to the fans and under pressure, that winning a championship was the team's singular focus. Now, with the ouster of Chip Kelly — does anyone miss this impression? — the hiring of Pederson goes back to Lurie's emphasis on stability and culture.

Wright wouldn't proclaim that the Eagles are on the verge of anything just yet, but he said he saw "an impressive group of guys" and believes there's a good vibe in South Philadelphia.

"As a coach, I always say, be patient, give coach Pederson and the staff, this team, a chance to gel. It might be by the end of the season, but it's a process. It takes time for these guys to go through experiences together. It doesn't happen overnight. You can't just put a staff and players together and win a championship, but you can start building a championship mentality."

Thanks to @VUCoachJWright for stopping by and addressing the team. Full in-studio interview coming later today. pic.twitter.com/R9SdgLiN1r