Championship hats, t-shirts and pennants among hot items at Modell's 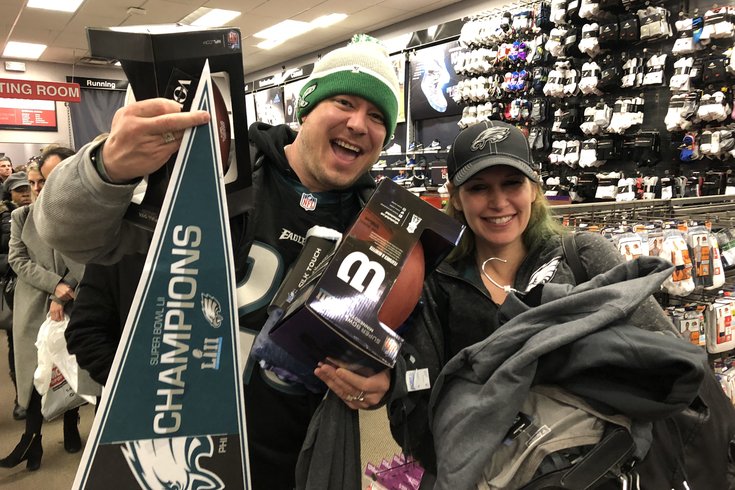 Greg and Christy Ruoff, of Los Angeles, flew to Philadelphia to win the Super Bowl with family and friends. On Monday, they stopped by Modell's to purchase as much Super Bowl gear as they could.

Greg and Christy Ruoff had their hands full on Monday morning – but they couldn't have been happier.

Together, they stood in line at Modell's, waiting to purchase an assortment of Eagles' Super Bowl merchandise – footballs, pennants and t-shirts. Basically, anything inscribed with the title "Super Bowl Champions."

"It's the greatest day of my life and now I'm buying up everything I can to remember it," said Greg Ruoff, a lifelong Eagles fan who turned 41 on Sunday – the same day his beloved Birds captured their first Super Bowl title.

The Ruoffs, who now live in Los Angeles, flew into Philadelphia on Saturday night aboard a plane filled with Eagles fans who did not shy from singing the Birds' fight song. That energy only increased once they reached the city.

"It was magical," said Ruoff, his voice still hoarse. "When you got off the plane, you could feel the energy. The city was just pulsating."

They watched the Super Bowl at a pair of house parties in Center City before joining the thousands of jubilant fans who rushed onto Broad Street in celebration.

"I've been with him 11 years and never seen him like that. He didn't cry like that at our wedding." – Christy Ruoff, 46, of her husband, Greg

On Monday, the Ruoffs were among thousands of fans who stopped by the Modell's store at 16th and Chestnut streets. Virtually all of them wanted to get their Eagles championship gear as soon as possible.

Could anyone blame them? The Eagles hadn't won an NFL Championship since 1960 – seven years before the first Super Bowl.

Anticipating the rush, Modell's in Center City opened its doors shortly after the Eagles' thrilling, 41-33, victory over the New England Patriots ended around 10:20 p.m. on Sunday.

Eagles fans immediately flocked in, looking to grab championship shirts, hats and sweatshirts. Outside the store, crowds of people broke out into Eagles chant after Eagles chant. 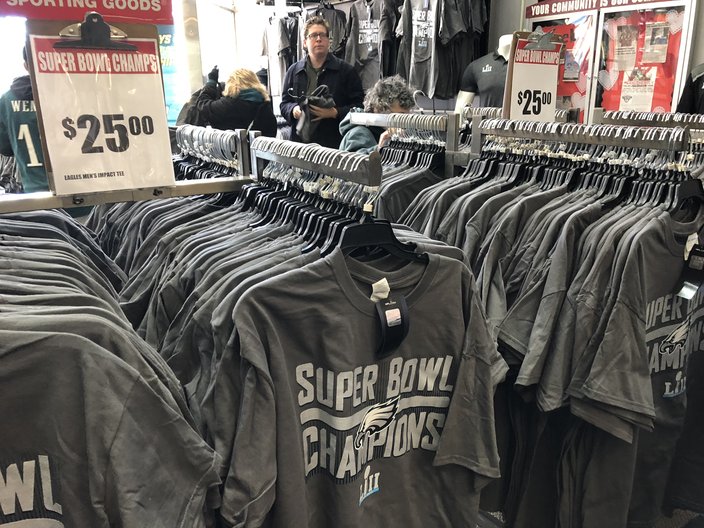 The store temporarily closed around 1 a.m. before reopening at 5:30 a.m. By mid-morning, it was packed with people, with sale lines snaking throughout the store.

Knitted hats commemorating the Eagles' Super Bowl win were among the hottest items, Davis said. By 11 a.m., the store had sold out of them. But Davis promised more shipments are on the way.

Knowing merchandise would sell quickly, Donna Bostic and Adrian Rhaney, both of Philadelphia, stopped by the Modell's at the Cedarbrook Plaza in Cheltenham at 5:30 a.m. Then, they headed into Center City to buy even more gear.

"When they actually won, I cried a little bit. I got emotional. Ever since I was little, people would tell me the Eagles would never win anything." – Derrick Brooks of West Philadelphia

"Pretty much, it's going to be gone," Bostic said. "If you want to get the best, you got to come early."

The two women, who simply said they were both "under 50," remained elated at the Eagles' championship. The long lines were probably the happiest Philly has been since the Phillies won the World Series in 2008.

"We've seen a lot of disappointment," Bostic said. "We've also seen different quarterbacks and coaches come and go. It was always a disappointment, year after year. Every time they didn't make it, the line was 'next year.' But next year never came."

Until it finally did. 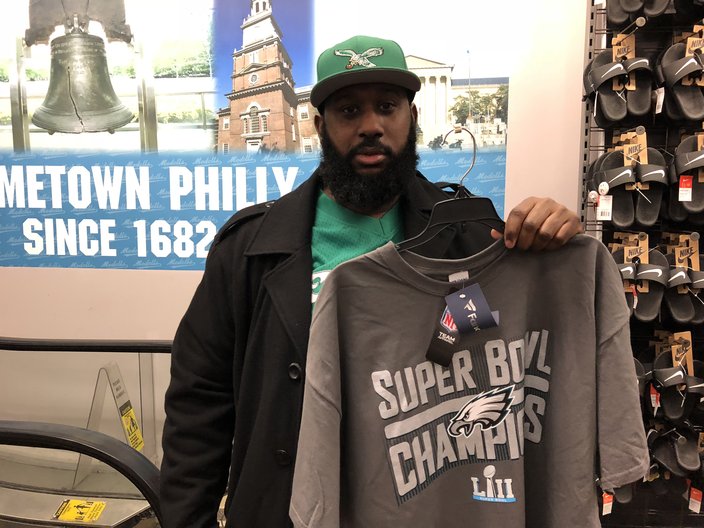 Derrick Brooks, of Philadelphia, displays the Super Bowl t-shirt that he was waiting to purchase at Modell's. Brooks says he 'cried a little' after the Eagles finally won the Super Bowl.

That sense of excitement drew Bill and Carol Jones, of Litchfield, Conn., in to Center City on Sunday. The couple lived for 17 years in Doylestown, Bucks County, but moved closer to their family in Connecticut four years ago.

But they came back to watch the Super Bowl in the city, cheering the Birds inside the Loews Hotel with fans from Los Angeles, Washington and Brooklyn. After the game, Bill Jones, 76, gave high fives to the people who rushed onto Market Street.

"It was absolute craziness," Bill Jones, 76. "We had so much fun. It was well worth the trip."

And they decided the experience was worth celebrating with a t-shirt.

Likewise, Derrick Brooks, 32, of West Philadelphia, stopped in Modell's on Monday morning, having spent Sunday night among the throngs of people who celebrated on Broad Street.

"When they actually won, I cried a little bit," Brooks said. "I got emotional. Ever since I was little, people would tell me the Eagles would never win anything."

With the immediate celebration over – and a parade yet to come – Brooks wanted to grab a Super Bowl t-shirt so he could proudly walk into work sporting his championship garb.