Eagles-Giants divisional round inactives, with analysis 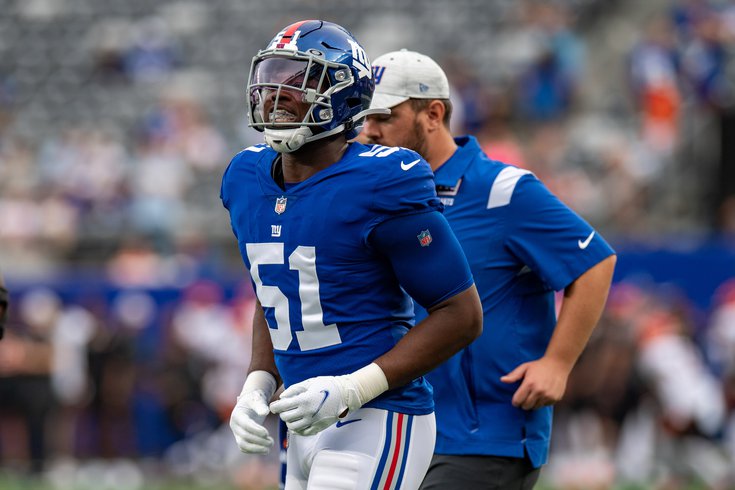 The Philadelphia Eagles are coming off their first round bye, and they only had five players listed on their injury report ahead of their divisional round matchup against the New York Giants. The Giants are a relatively healthy team as well.

• CB Avonte Maddox: Maddox is one of the NFL's best slot corners, but he has struggled staying on the field. In his varying absences this season, opposing offenses consistently attacked backup slot Josiah Scott with their best receivers. The Eagles have since adjusted, with safety Chauncey Gardner-Johnson playing in the slot in nickel, and Reed Blankenship subbing in to take Gardner-Johnson's vacated spot at safety.

• OL Josh Sills: With Lane Johnson back in the lineup, Sills is an inactive once again. Andre Dillard will likely back up Jordan Mailata at LT and Landon Dickerson at LG, Cam Jurgens will back up Jason Kelce at C, and Jack Driscoll will back up Johnson at RT and Isaac Seumalo at RG.

• LB Kyron Johnson: The Eagles like Johnson on special teams, but there really aren't any better options for the inactive list.

• S Anthony Harris: The Eagles called up Harris from the practice squad for this game, but he's inactive anyway.

• P Arryn Siposs (IR): Siposs collected a loose ball after a blocked punt and was injured while trying to run for a first down Week 14 against the Giants. The Eagles signed 15-year vet Brett Kern to the practice squad to replace him.

• DE Derek Barnett (IR): Barnett tore his ACL Week 1 against the Lions, and his season is over. After a 2021 season in which he had 8 penalties vs. 2.5 sacks, Barnett lost his starting job, but remained a depth player poised to get his share of snaps in 2022.

• DT Marlon Tuipulotu (IR): Tuipulotu has 16 tackles, a sack, and a fumble recovery in a rotational role this season.

Edge rusher Azeez Ojulari was listed as questionable on the Giants' injury report with a quad injury, but he will play.

• OG Joshua Ezeudu (IR): Ezeudu is a rookie third-round backup guard who has seen action in 10 games this season, with 2 starts.

• OG Shane Lemieux (IR): Lemieux is another backup guard who has only appeared in one game this season (Week 11 against the Lions), which he started.