Mailbag: Eagles beat writer season predictions, from this past summer 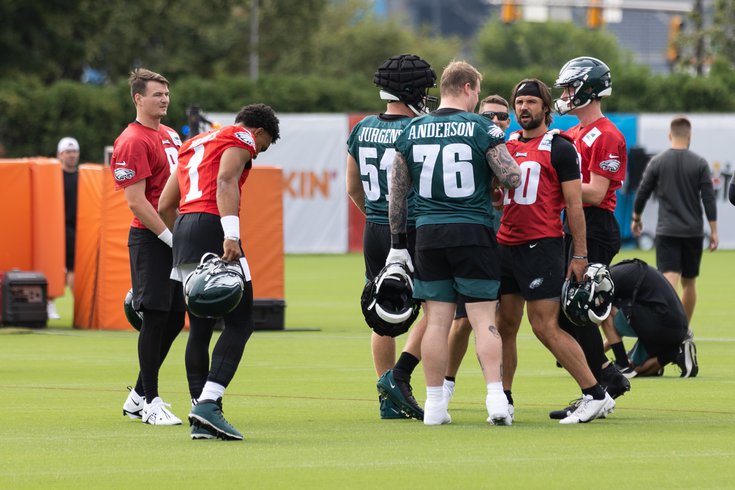 Question from Office Linebacker: Who has had the more surprising season in your opinion, the Eagles or Giants?

For the better part of the season, both Nick Sirianni and Brian Daboll were considered NFL Coach of the Year candidates. That award usually goes to a coach of a team that outperforms expectations, which both the Eagles and Giants did in 2022.

In training camp this season, it was clear to the folks who attended practice every day that the Eagles were going to be good. Maybe not 13-1 (and eventually 14-3) good, but definitely good. Throughout camp, I did one-on-one interviews with Eagles beat writers / other media folks while the players were stretching and doing other boring stuff. Within those beat writer interviews, I asked each media guy four different questions:

All 10 of the above media folks had the Eagles winning at least 10 games, and making the playoffs. I had them at 11-6. Eight of the 10 were bullish on Hurts being the starting quarterback in 2023, one leaned that way, and one was undecided. But as you can see, we all thought they would be a reasonably good team.

I don't have a list of preseason record predictions for the Giants, but this was a team that was tied for the worst record in the NFL over the previous five seasons with the New York Jets, at 22-59 (0.272), with a point total differential of -530. John Mara hired arguably the worst general manager in the NFL in Dave Gettleman in 2018, and kept him around for four years despite clear incompetence. After Tom Coughlin's exit, Mara hired Ben McAdoo, Pat Shurmur, and Joe Judge, all disasters in their own way.

This past offseason the Giants cleaned house, hiring Brian Daboll as the new head coach, and Joe Schoen as the new GM. Because Mara's previous hires went so terribly sideways, there was good reason to doubt he'd get it right on try No. 4, but so far Daboll has been a huge hit. Even as I look at this Giants roster now, it's impressive that they were even able to finish with a winning record, much less find themselves in the divisional round of the playoffs, and seemingly confident that they can win.

So for me, the Giants are the much bigger surprise, and Daboll would get my vote (I don't actually have a vote) for NFL Coach of the Year.

Question from RKotite: The Eagles have really good depth. Where are the Giants weakest in terms of depth, and specifically, if a Giant went down, which position would have the greatest dropoff between the starter and the backups?

I'll rank the 10 players that the Giants can least afford to lose to injury:

1) QB Daniel Jones: The Giants have a decent backup in Tyrod Taylor, but obviously you don't want to lose your quarterback.

2) LT Andrew Thomas: Evan Neal really struggled as a rookie this season at RT, and the three interior guys are exactly that... just guys. Thomas is by by far their best offensive lineman, and their OT backups, Matt Peart and Tyre Phillips, would be massive downgrades.

3) DT Dexter Lawrence: Lawrence is the Giants' best defensive player. He is a powerful beast who creates disruption both in the run game and as a pass rusher.

5) CB Adoree Jackson: Jackson is the Giants' only decent starting cornerback. The other starters are Fabian Moreau and Darnay Holmes. The Giants had guys like Nick McCloud trying to cover A.J. Brown Week 14 when Jackson was out, and that went about as expected.

6) Edge Azeez Ojulari: Kayvon Thibodeaux gets more hype, but Ojulari is the better pass rusher. He just hasn't been able to stay healthy. He has 13.5 sacks in his first 24 games as a pro.

7) Edge Kayvon Thibodeaux: While I believe that Ojulari is the better player (when healthy), Thibodeaux did turn it on the back half of his rookie season. He could be a handful for Jordan Mailata tonight. The Giants have no threatening edge rushers behind Ojulari and Thibodeaux.

8) DT Leonard Williams: Good player, both against the run and the pass, but very few splash plays this season, as he has battled injuries. The Giants have nothing behind Lawrence and Williams at DT.

9) WR Isaiah Hodgins: The Giants have a boatload of injuries at WR, and Hodgins has stepped up as a go-to guy for Jones down the stretch. He has 20 catches on 26 targets for 236 yards and 3 TDs for the Giants the last three games.

Question from Giant Blue Balls: Uncle Jimbo - should Eagles fans be rooting for a relatively competent performance by Daniel Jones (that ends in a loss) so that the Giants have to hitch their wagon to him for the foreseeable future?

I think they're already there. The highest draft pick they can have is 25th overall, so all the good quarterback prospects will be cleaned out by then. Jones had a decent enough year and the team won its first playoff game since the 2011 season. I don't think they're paying him $200 million over the next five years, but I would be shocked if he isn't their quarterback in 2023 at a much higher price tag than what he cost this season.

Question from RKotite: If the Eagles make it to the Super Bowl, but Lane Johnson's injury doesn't hold up and he can't play, who should they want to face? Which AFC team has the least imposing defensive line or player coming off the defensive left side?

The three legitimate AFC Super Bowl contenders are the Bills, Bengals, and Chiefs. I've noted previously that if given the choice to face Patrick Mahomes, Joe Burrow, or Josh Allen, I would choose Allen because he is the most careless of the three with the football, both in terms of interceptions and fumbles.

But if Johnson reaggravates his injury and it's determined that he's done for the season, the Bengals have the least threatening pass rush. They only had 30 sacks this season, with only the Raiders, Falcons, and Bears having fewer.

Question from DB: Is there an easy way to get Jason Kelce a TD? Would it be too obvious if he lined up in the backfield or tackle-eligible?

He was a fullback initially in college at Cincinnati, so if you really wanted to get him a touchdown in a blowout, just line him up in the backfield and hand him the ball. It would almost be more on-brand to tell the defense what you're going to do and do it anyway with a Kelce TD.

Question from Pizza the Hut: Uncle Jimmy, as the press box spread connoisseur, what grade would you give Nick and staff for their choice of pizza during game prep? It isn't like we live in middle America with no legit options. Generations of Siriannis must be rolling over in their graves. Is this bad juju going into Saturday?

I appreciate pizza so much that I actually follow some people on Instagram who eat and review pizza. And even those folks will throw some Ellio's in the oven, or dabble in the occasional chain pizza. Personally, I'll order Dominos a few times a year, for several reasons:

Should Dominos or Pizza Hut be a go-to? Obviously, no. The local pizza shop remains king. But if you have an occasional craving for some greasy chain pizza, by all means order it up. Just... never Papa John's.