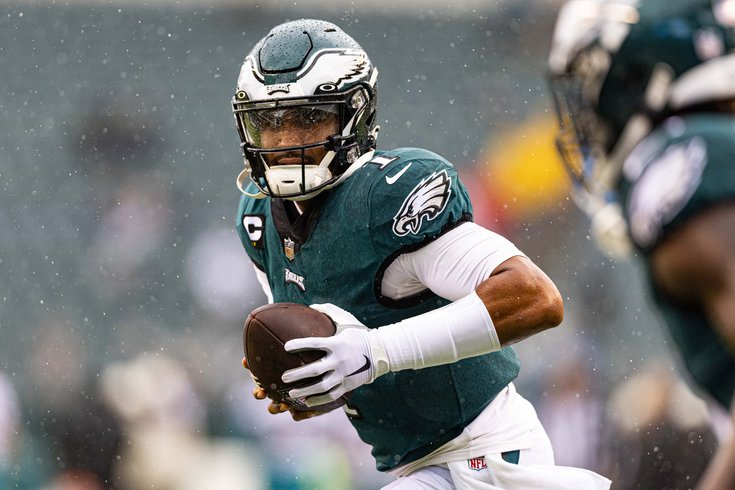 Jalen Hurts and the Eagles are heavily favored against the Steelers.

After falling into a 14-0 hole against Jacksonville, Jalen Hurts got the Eagles back in it, but boy it wasn't pretty.

Facing a 4th and goal from the Jaguars' 3 in the second quarter, Hurts took the snap from the gun then took off up the middle. Rookie linebacker Devin Llyod was there to meet him at the goal line and delivered a hard hit that knocked the ball loose as Hurts trucked forward.

There was a scramble for the ball, but it wouldn't matter. Hurts held on long enough to break the plane, the officials ruled. Touchdown Eagles.

Jalen Hurts sells out on 4th and Goal! @JalenHurts

The run capped off a crucial drive for the Eagles, building momentum on a series that nearly lost in all in the red zone.

Hurts dumped a screen off to tight end Dallas Goedert who took the ball downfield 26 yards and into scoring position.

On the next play, Hurts hit A.J. Brown on another screen, and the wide receiver cut right to the end zone. Goedert got caught blocking ahead too soon though and was flagged for offensive pass interference, negating the play and moving the ball back.

Dallas Goedert gets called for blocking downfield and the A.J. Brown TD comes off the board... pic.twitter.com/MNsAslBdm4

But the Eagles kept pushing. It wasn't pretty, but they're back in it.