What they're saying: Carson Wentz 3.0, a new Miles Sanders, and contempt for FedEx Field 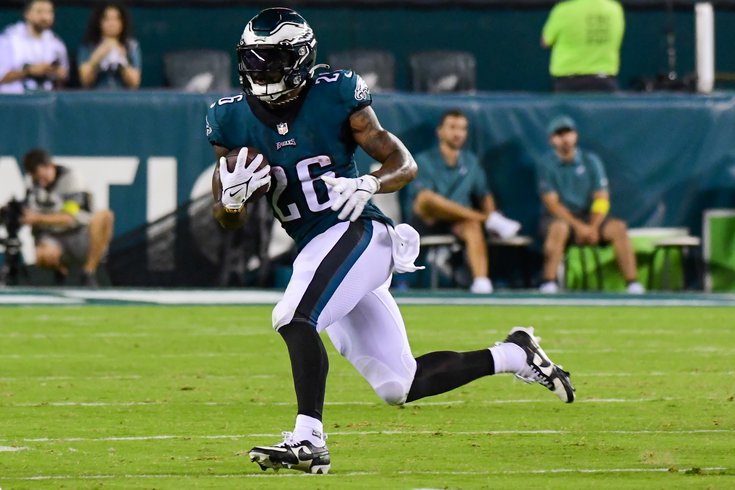 RB Miles Sanders changed up how he runs and is more effective as a result.

It's a short week for the Eagles, and in terms of storylines, a pretty hectic one too.

Jalen Hurts hype is at an all-time high following the best performance of his career thus far, Darius Slay put the clamps on one of the NFL's best receivers and got NFC Defensive Player of the Week honors for it, Britain Covey can return punts but can't get a parking spot, The Wonders Years' new album has a Nick Foles shoutout...

Then of course there's that obviously big matchup against Carson Wentz for the first time since the messy breakup following the 2020 season.

And the Eagles have to go down to FedEx Field for it. The Eagles media contingent has OPINIONS about FedEx Field (here's how Jimmy Kempski feels about the place, please stand by for Shamus Clancy impressions).

Anyway, what else is being talked about with the Eagles? We'll take a look, but first a shameless plug...

In the summer of 2016, Philly sports weren't in a great spot.

The Flyers were just okay, the Eagles were bad, the Sixers were EXTREMELY bad, and the Phillies were baseball's worst. But the latter three all had their own guy they were pouring their hopes into.

Within a few months of one another, the Eagles traded up to draft Carson Wentz, the Sixers successfully tanked their way to Ben Simmons, and the Phillies had the right of way to select five-tool prospect Mickey Moniak first overall.

All three were supposed to be the future, but after what's felt like a short six years, all three are gone.

After Moniak, the last one standing, was traded to the Angels at the beginning of August, I tried to chart the entire timeline and nail down what that whole era in the city ultimately meant. It felt necessary to bring back again up considering Wentz and Simmons both have recently discussed their stints in Philly.

Was it all a waste? No. There was indisputable success.

The miracle run to Super Bowl LII doesn't happen without Wentz and the Sixers don't escape mediocrity without Simmons. But both of their tenures in Philly ended badly, Moniak's struggled to take off, and Rubstov's just never did (though the Flyers did pick up future goaltender Carter Hart in the round after).

In the end, the spring and summer months of 2016 in Philly sports are complicated in retrospect, because the decisions made during them led to a mix of the impossible, the forgettable, what could've been and what never was.

Okay, now on to "What they're saying" proper...

Jalen Hurts and A.J. Brown have, understandably, grabbed a lot of attention on the offense. But have you noticed something about Miles Sanders this season? He's running the ball downhill a lot more and simply taking the yards that are given to him. He isn't trying to run horizontally looking to break for something bigger nearly as much as he used to.

He's changed up the way he runs, as Reuben Frank observed, and is way more effective because of it, which makes the Eagles' offense all that more dangerous.

Two games in, Sanders is seventh in the NFL in rushing with 88 yards per game and fourth with 5.9 yards per carry. He's 10th in attempts but fifth in first downs.

But maybe the most impressive number is three. That’s how many carries of no yards or less Sanders has on 30 carries. He’s got two carries for minus-one yard and one for minus-two.

He’s gradually lowered his percentage of negative runs from 18 percent as a rookie to 16 percent in 2020 to 12 percent to 10 percent this year.

He’s really transformed the way he runs, and while he hasn’t hit the big runs like he used to, he’s become a better back. [NBC Sports Philadelphia]

If things were different

Time and distance always lead to a shift in perspective.

Wentz and the Eagles didn't work out in the end. There were a lot of reasons why they didn't, and from his side, he at least seems aware of where and when he could've done better.

On his run in Philadelphia, when Wentz met with the D.C. media earlier this week via the Washington Post:

“It was definitely a wild ride in many, many ways,” Wentz said. “… But it definitely does catch you off guard. Things change, and you have to learn to grow up and change and adapt. And at the end of the day, I’m thankful for it. I’m thankful for the changes that life has brought, and I’ve grown a lot from it.

“There are always things I look back on and [think], man, I could have been better here. I could have been better as a person, as a teammate. [There are] lots of things that you do take for granted,” he said. “And so I think I definitely thank God for the experiences I’ve had even though sometimes they’re dark or sometimes they’re not how I envisioned them to be. But I think it’s allowed me to grow as a person, and I’m thankful for that.” [The Washington Post]

As mentioned earlier, the Eagles media contingent has its opinions of FedEx Field. None of them are good.

Not even radio man Merrill Reese has good things to say about the place, and it's extremely rare for him to speak badly about anything, but that FedEx Field broadcast booth is bad. It's tucked away in the corner of one of the end zones, with an obstructed view blocks out the scoreboard entirely.

“I’m not a fan of that booth, but I’ll go back to the dump,” Reese told Rob Tornoe over at the Inquirer.

Harsh, though not unfounded. I got Reese's book as a gift in high school as I was starting to figure out that I wanted to pursue journalism in college.

There's a whole section in there about his dislike of FedEx Field. He really does not like FedEx Field.

Things change quick in the NFL, and the current opinion on Jalen Hurts is glaring proof of that.

Before the season, he was a huge question mark. Would he develop as a passer? Is his arm good enough? Can he scan the field? Is he really the answer?

He led the Eagles' offense to 31 points and helped stave off a furious Lions comeback in Week 1, and then on Monday, absolutely balled out. His MVP odds shot up, is the highest-rated passer on Pro Football Focus two weeks into the season, and now has jumped to within the top 10 of NFL.com's QB Index.

Wrote Marc Sessler after Hurts jumped from 12th to 9th on the index:

Hurts is making the leap before our eyes. In full control on Monday night against the Vikings, the versatile signal-caller decisively tossed a 13-yard dart to Dallas Goedert under pressure before using his powerful legs to plow through defenders for the game’s opening score. For the lingering WHAT ABOUT HIS ARM? crowd, Hurts fed that debate a bottle of sleeping pills with a perfectly placed 53-yard rocket to Quez Watkins that pushed the Vikings into a 14-0 hole. During a shining first half, Hurts amassed 301 all-purpose yards and three touchdowns. Philly is a load to deal with because opponents must respect the threat of DeVonta Smith, the devastating nature of A.J. Brown and Hurts on the ground -- as evidenced by his 26-yard dash to the end zone that shot an arrow through Minnesota’s inner world. [NFL.com]

Are those questions still out there? Sure.

But have things quieted down around those points? For sure.

Again, Hurts hype is at an all-time high.