Which Eagles jerseys are acceptable to wear? 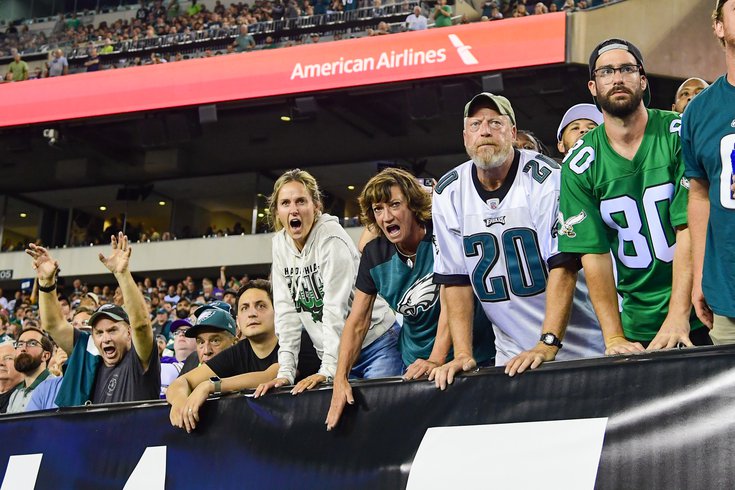 I don't want this to be a financial discussion. Have an old Eagles jersey and don't have the money to spring for a new one? I get that, but if you're sitting in a suite like this person was, maybe at least go to Target and pick up a generic t-shirt for $12 instead of having everyone looking at you for the wrong reasons?

Sitting next to PhillyVoice managing sports editor Evan Macy that night, we wondered which Eagles jerseys are acceptable to wear and which aren't. I immediately thought that I've never been more qualified to write a story. Those years as a copywriter at Urban Outfitters are finally paying off!

• Kiko Alonso: What a complete dud.

• Carson Wentz: When Wentz is officially retired from football, I will allow fans to wear his jersey as an acknowledgement to his contributions to the 2017 Super Bowl team. Doing so now, while he plays for a divisional rival no less, is a big no-no. Definitely don't wear a North Dakota State one. If you want to MacGyver it, put some duct tape on the back and write "BROWN" in Sharpie.

• DeMarco Murray: My buddy Joe received a DeMarco Murray jersey as a birthday gift in August 2015. I hope he buried it under someone's lawn in Packer Park.

• Sam Bradford: I haven't seen a Sam Bradford jersey in the wild since the infamous 2015 season, but they better not see the light of day for a guy who's not even a top-three quarterback in team to wear No. 7.

• Josh Huff: A friend who shall go unnamed loved Josh Huff, but could never find his jersey. When asked on Thursday about the Huff jersey situation, he said, "I would still wear it to this day if I got one." That's a big no.

• Byron Maxwell: Let's just make a general rule that if a player was on the 2015 Eagles, but not the 2017 Eagles, don't wear their jersey!

• Obvious busts: I've never once seen a Danny Watkins or Marcus Smith jersey, but not wearing those goes without saying.

•  Nnamdi Asomugha: I still see these all the time! What are people doing?

• L.J. Smith: L.J. Smith was a massive disappointment and a lot of jerseys were nevertheless printed up for him. Be weary of wearing it, but if you have one, you can use this spin zone: Tell people that you've repurposed it and are using it for Torrey Smith, who shares L.J.'s namesake and wore No. 82 on the Super Bowl squad.

• Freddie Mitchell: I bought one on eBay once as a gag gift for a friend who would bartend at a spot Freddie Mitchell would frequent. If you're wearing it super ironically, maybe you could pull it off, but I don't think the average fan is capable of that.

• No. 29 LeSean McCoy: Such a bad running back number.

• Nelson Agholor: I'll give Nelson Agholor the Wentz treatment. Once he retires, it becomes okay to wear it again given how well he performed in the Super Bowl, leading all receivers with 84 yards. His time in Philly ended on such a rocky note and the memes came to define him though, necessitating some time off before an Agholor jersey becomes acceptable to wear again.

• Mike Mamula: There are a million of these on eBay. Don't buy one!

• Kevin Kolb: Not even Jackie Weaver can in "Silver Linings Playbook" can make this work.

• Any current Eagle: Even if they're no longer good or performing poorly, it's totally fine if they're on the current roster.

• No. 2 Jalen Hurts: I wrote about this specific jersey in a Wednesday mailbag.

• David Akers: Nothing like a 49-year-old father of three putting on his David Akers jersey and tucking it into his bootcut jeans. Nothing.

• Nick Foles: Wear a Nick Foles jersey to your wedding if you want. It's acceptable for any occasion in Philadelphia.

• 2017 Eagles: With my "taken out of rotation" Wentz and Agholor caveats aside, any champion's jersey is fine. Cool rarities from that team would be Chris Long and Jay Ajayi.

• Blue and yellow throwbacks: They're in the "so bad it's good" category. A Kevin Curtis one is the best possible option because he had 221 receiving yards in that game.

• Obvious former players: If you're walking into Mitchell & Ness and see jerseys for Randall Cunningham, Reggie White, Brian Dawkins, Chuck Bendarik, Jerome Brown and more, those are clearly good ones to grab. Plus oldies like Ron Jaworski, Wilbert Montgomery, Mike Quick, etc. I'd extend it to most of the Andy Reid golden era too, guys like Bobby Taylor, Donovan McNabb, Brian Westbrook, Troy Vincent, Jeremiah Trotter, Sheldon Brown and more back when Reebok was making the 🐐 NFL jerseys.

• Cris Carter: In the picture for this story, there is a fan wearing a Cris Carter jersey. Some younger Eagles fans might not know it, but the Hall of Fame receiver spent the first three seasons of his career with the Birds, catching 19 touchdowns in the span. Carter was released due to drug-related issues following the 1989 season. Watching a clip from Carter's episode of "A Football Life" helps provide context. Anyway, I give a yes to Carter. A general rule I'll carry is that if Mitchell & Ness is releasing a throwback for it, it's okay.

• Ricky Watters: This is a tough one because of the rough "For who? For what?" moment, but the dude's stats were crazy. In his three seasons with the Eagles, he had 5,112 total yards from scrimmage and 32 total touchdowns. I like the shade of midnight green from those years better than the current one Nike uses too. .

• Terrell Owens: I know things ended in disaster, but 2004 T.O. is the most captivating season I’ve seen for a specific Eagles player. Yes, he left for Dallas, but just think back to the pure joy he brought during that run to the Super Bowl  I was 10 at the time  Maybe I’d think differently if I was 25 at the time  I was in awe of him as a kid

Again, I'll close with this: if you don't have the means to buy a brand new $100 jersey, that's totally understandable. Maybe just grab a $10 bootleg t-shirt outside the stadium though instead of wearing "Asomugha" across your back.