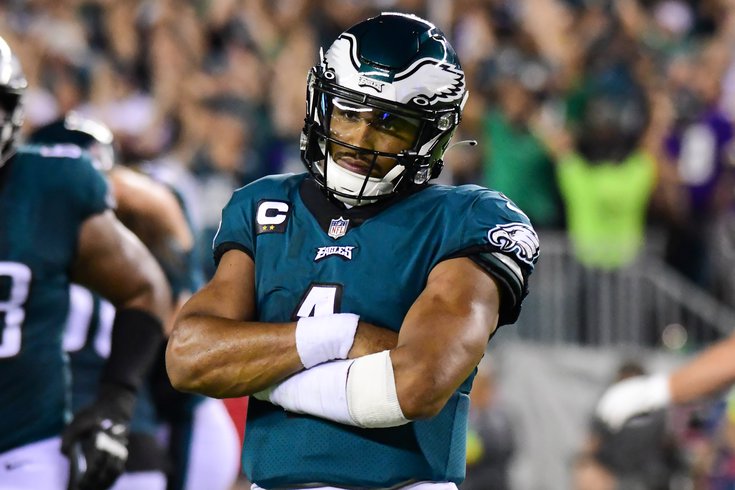 Are Pro Football Focus grades the most reliable metric in the world? No, but they provide a baseline of how players are doing relative to the rest of the competition around the NFL and are fun to discuss. Eagles fans might be all-in on PFF right now though given how favorably they're viewing the Birds heading into Week 3.

Jalen Hurts is PFF's top-rated passer after two weeks of the 2022 season with a grade of 90.8, a development even the staunchest Hurts supporters couldn't have imagined. Hurts is PFF's No. 2 quarterback overall after Josh Allen when factoring in the running game and ball security. I'm not sure how Hurts is their 17th-ranked rushing QB, but, hey, that's part of the statistical noise that comes with this grading system.

The Eagles overall are tied for the top spot in PFF's team grades with the Bills at 81.3. For reference, the Birds' Week 3 opponent, Washington, is 25th.

Here's a better look at which Eagles grade well on PFF so far this season:

Some notes on the rankings/grades/ratings...

• Hurts really is the top-rated passer. What a world.

• Jason Kelce is continuing his future Hall of Famer-level of play.

• If he stays healthy, Darius Slay might be on the way to his second ever First-Team All-Pro selection this season.

• A.J. Brown is everything Eagles fans could've hoped for and more.

• Avonte Maddox was miscast as an outsider cornerback in the past, but he's settled in nicely as one of the better slot corners in the NFL.

• It's been a climb for T.J. Edwards. He was an undrafted rookie free agent out of Wisconsin in 2019. He went from playing in just four games in 2019 to playing 59 percent of the defensive snaps in 2020, to 64 percent in 2021 to 96 percent so far this season. Even with veteran free agent signing Kyzir White and highly touted rookie Nakobe Dean in the linebacker room, Edwards is still the Eagles' best LB.

• Major props are due to general manager Howie Roseman retooling the roster over the last two offseasons and for head coach Nick Sirianni rebounding from a rough 2021 start to leading a true NFC contender.

• Offensive coordinator and play-caller Shane Steichen is going to be an NFL head coach in 2023.