Now that the 53-man roster is locked in, many are feeling pretty good about the Birds 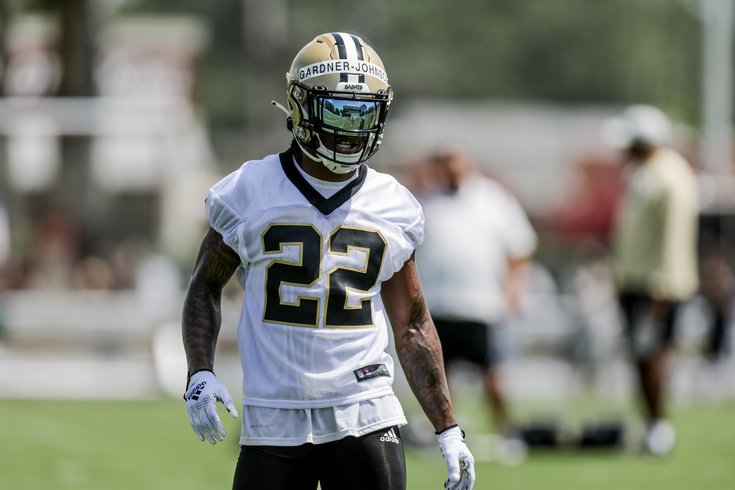 The 53-man roster was locked in Tuesday, but not before the Eagles made one final splash, trading with New Orleans for safety Chauncey Gardner-Johnson to bolster the team's last glaring position of weakness.

The move was met with praise from the media, a section of which now believes the Eagles have one of the best rosters in the entire NFL, and plenty of hype from fans, who may very well take to Gardner-Johnson as a fan favorite provided they haven't already.

Our own Jimmy Kempski had a position-by-position analysis of the roster once it became official and Shamus Clancy reported in from GM Howie Roseman's and head coach Nick Sirianni's press conference down at the NovaCare Complex after the 4 p.m. deadline.

The team is set and it's just under two weeks before the 2022 season finally kicks off.

So what's everyone saying about the Eagles now?

With Tuesday's trade, the Eagles got themselves a starting caliber safety to pair with Marcus Epps, and Gardner-Johnson, who is entering the final year of his contract, has the opportunity to earn himself a big payday with a defense that looks stacked on paper.

Everyone's getting what they want, "which is important to everyone involved," said NFL Network insider Tom Pelissero.

In New Orleans, he was used predominantly in the slot as a nickel, so when it came to those contract negotiations, the safety market is a lot more lucrative than the nickel market.

I spoke to Gardner-Johnson's agent, Kevin Conner, who told me that there was a strategic element to this. Now he gets into a situation in Philadelphia, with some coaches who he knows and are very good, on a talented defense, the opportunity here to make himself a lot of money for a guy who as we know can be impactful on the game in multiple ways. [NFL Network]

More on the #Eagles making a big trade for Chauncey Gardner-Johnson, who is in a contract year and can earn himself a whole lot of money in a new role. @nflnetwork pic.twitter.com/qzsshMJWej

Except for the Saints

NFL.com editor Greg Rosenthal on the New Orleans perspective of the trade:

The Saints' trade of Chauncey Gardner-Johnson to the Eagles made no sense. The 2019 fourth-rounder is headed into the final season of his rookie deal, and a few team-friendly explanations suggested New Orleans wanted to get something for Gardner-Johnson now, given that he wasn't going to be a priority in free agency next year -- but that explanation doesn't hold water. The Saints essentially received nothing in return: a 2023 fifth- and 2024 sixth-round pick in exchange for one of the league's best hybrid slot players and a 2025 seventh-rounder.

One season of "Ceedy Deuce" should be worth way more than that, and his production would have likely yielded the Saints a third-round compensatory pick if they'd been patient enough to wait for him to sign elsewhere in free agency next offseason. It was a salary dump before they even had to pay Gardner-Johnson his big salary. Per NFL Network Insider Ian Rapoport, "he really reacted to not getting the contract that he wanted" in extension talks with the team, but there have been no indications otherwise he was going to skip work or be a problem. Even the reports defending the Saints' position painted the decision as business, not personal. (The Saints, for what it's worth, also have a ton of cap space this season, having cleared room ahead of their failed pursuit of Deshaun Watson.)

It's clear the Saints feel great about their secondary depth. I do, too! But it's still puzzling that they gave away one of the league's best young players at his position. To put it another way: If Gardner-Johnson had been available in a trade in February, he would have been worth a second- or third-round pick at worst. [NFL.com]

As mentioned earlier, the Gardner-Johnson trade was met with a lot of praise from the media, and we don't just mean national media, either.

Weirdly enough, parts of the Dallas media were genuinely high, and envious, of the move too.

The Eagles last won a playoff game the exact same year the Cowboys did. Philly also won *a Super Bowl* the year before.

Philadelphia's roster is head and shoulders above Dallas' right now AND they have far more draft capital than them.

Don’t let the 2022 storylines distract you from the fact that, even if Jalen Hurts is bad & the Eagles disappoint, they’ve positioned themselves to go after a QB next year by acquiring multiple 1’s.

I deeply admire the way they run their team & I don’t care who knows.

The Eagles understand that it is never enough.

Not everything hits, but they make sure to always keep on swinging and eventually it'll work. It is the way. https://t.co/FIATZa7FU6

With poise, with grace

Landing an upgrade at safety, the Eagles didn't have much of a need for Anthony Harris anymore, and though it was a conversation that general manager Howie Roseman and head coach Nick Sirianni didn't want to have, they ultimately made the decision to cut him.

"I think when you talk about Anthony, you talk about one of the tough conversations, it's with Anthony Harris today," Roseman said Tuesday. "I think that was one that the two of us were not really looking forward to, but what a pro he is, and like everything he does, he handles everything gracefully."

And that included his release.

Not long after being cut, Harris was over in Cherry Hill appearing at a youth charity event he had agreed to be at long before,  now with a new lesson to teach.

He was officially released at 4 p.m. Tuesday. And by 5 p.m. he was at Dick’s Sporting Goods in Cherry Hill, where a group of young local athletes were each provided $150 gift cards to shop for sporting goods. Harris served as their personal shopper.

The idea behind the program is to encourage youngsters in South Jersey to participate in sports, and that’s a noble cause.

But for Harris it was also an opportunity to teach the kids about the importance of dealing with adversity in a positive and constructive way.