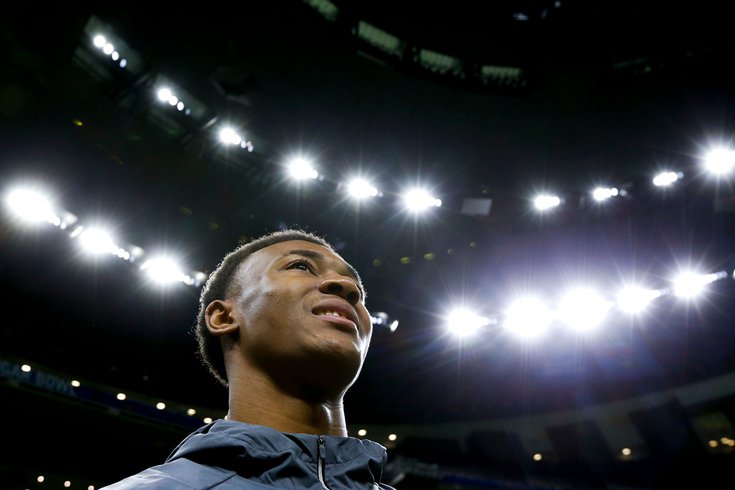 The Eagles were out on the field on Tuesday, and unlike the recent rookie minicamp, this practice included the entire team, meaning reporters (and fans watching their tweets role through) were treated to their first glimpse of rookie DeVonta Smith catching passes from second-year quarterback Jalen Hurts.

And let's just say that the reviews are positive, especially for the rookie, who apparently caught everything that was thrown his way — and he looked good doing it.

As the summer progresses and the spread-out practices eventually turn into a full-fledged training camp, the hype for the Alabama wideout will only grow, especially if he continues to put up showings like he did this week. So that seems like as good a place as any to begin this week's edition of What They're Saying, which will also include some trade chatter, which always seems to be relevant with this team. Let's dive right in...

Two is better than one

We'll start with Ruben Frank at NBC Sports Philly, who wrote about how the Eagles young WR duo of Smith and former first-round pick Jalen Reagor could give the team something they haven't had in quite a while. Of course, he also acknowledged that none of this is a given considering the current unproven stature of both players.

Smith is a rookie who hasn’t played an NFL game yet and is only a couple walkthroughs into his career. And Reagor is coming off a disappointing, injury-riddled season in which he finished with fewer than 400 receiving yards.

So there’s a lot of work to do. Reagor needs to make huge strides to pay off on the Eagle taking him at No. 21 overall, and Smith still has to prove he was worthy of the 10th pick.

But it’s fun to think of what’s possible.

The Eagles haven’t had two wide receivers with 800 yards in the same season since 2014, when Maclin had 1,318 yards and Jordan Matthews had 872.

Last time they had two 1st-round WRs catch a pass in the same season was 1990 with Kenny Jackson and Mike Quick.  [nbcsports.com]

Over at Iggles Blitz, however, Tommy Lawlor didn't hold back in his praise of Smith. To say he's high on the rookie wideout would be an understatement, as he went ahead and compared the young pass catcher to some of the best receivers ever to wear an Eagles uniform.

I am more excited about DeVonta Smith than any Eagles draft pick in a long time. [...] I want to compare Smith to another Eagles receiver, but you really can’t. He is an unusual player, in a good way.

Smith has the route-running and hands of Jason Avant.

Smith has the run-after-catch ability of TO.

Smith has the toughness and physicality of Irving Fryar (had to throw in an old school guy).

I don’t know who to compare his body control to. I can’t think of a receiver who can twist, jump and adjust to the ball like Smith. He’s special in that area. Maybe you could go way back to Cris Carter. That’s really old school.  [igglesblitz.com]

Even if he's only two or three of those things, the Eagles are going to have a special player. If he has all four of those attributes, he'll wind up in Canton.

The one thing that seems to be consistent in all the reviews of Smith is that not only does he have a high ceiling, but his floor seems to be quite high as well.

What the numbers say

Let's get into the numbers, as ESPN's Mike Clay projected some stats for the NFL's rookie class, specifically at the skill positions. And DeVonta Smith appeared near the top of his rankings for receiving yards.

Three wide receivers -- Chase, Smith and Waddle -- were picked in the top 10 of April's draft. That probably didn't get the attention it deserves, considering zero wide receivers were picked in the top 10 in the prior three drafts, and a total of 11 were taken in those picks during the prior 10 drafts (2011-20). Of those 11, only two failed to appear in at least 10 games as rookies (John Ross and Kevin White). Six of the remaining nine reached 900 receiving yards, scored seven-plus touchdowns and were top-30 fantasy WRs.

This paints a very positive picture for Chase, Smith and Waddle in 2021. Assuming they stay healthy, all three are positioned to play significant offensive roles out of the gate.

Pitts' projection would place him fifth all-time for a rookie tight end and give him the most receiving yards by a first-year player at the position since Evan Engram's 722 yards in 2017. And while Bateman's upside is limited by Baltimore's run-heavy scheme, he has a path to an every-down role opposite Marquise Brown.  [espn.com]

Not too shabby. Now, he just has to live up to this hype, which seems to be growing with each passing week. Who knows what it'll look like once training camp rolls around, not to mention when actual games start being played.

On Monday, we wrote about Julio Jones' comments on "Undisputed" saying that he was "out of" Atlanta and how trade talks have already begun. At the time, we were discussing why the Eagles are, ONCE AGAIN, linked to a player on the trade block. And it would appear that one of the Birds cornerbacks would like the veteran wideout to join him in Philly, perhaps if only to avoid having to cover him when these two teams meet up in the season opener in Atlanta.

Can you really blame him?

Should Howie make the call?

Another person who thinks trading for Jones is the right move is WIP's Eliot Shorr-Parks. He recognizes that trading draft picks for Jones would likely be seen as a win-now move, and the Eagles certainly aren't in win-now mode, but he also points out that Jones is the kind of player worth adjusting your plan for.

Certain players, however, are worth pivoting the plan.

Julio Jones, even at 32-years old, is one of those players.

Which his why if the Atlanta Falcons are serious about trading Jones, and it certainly appears they are, the Eagles should definitely explore what it would take to trade for the All-Pro receiver.

The need for Jones is an obvious one for the Eagles. Last season the Eagles had one of the worst set of receivers in the NFL, partially due to injury, but also because of poor drafting. It is possible that new head coach Nick Sirianni is able to get more out of Jalen Reagor and J.J. Arcega-Whiteside than the last coaching staff was, but betting on it is a risky move. Even counting on DeVonta Smith to be the team’s No. 1, every-down receiver is a bit of a risk. There is plenty of upside in the Eagles’ group of receivers, but they definitely lack a quality veteran they can count on.

Jones would fill that void in a major way.  [audacy.com]

Will Ertz be traded? And if so, where?

Speaking of trades, Zach Ertz — despite constant noise suggesting he will be dealt at any time — remains on the roster. That could change soon, however, as the Eagles will save even more money on the cap if they wait until after June 1 to make a trade for Ertz. Over at ESPN, Bill Barnwell broke down a ton of potential post-June 1 trades (including Julio Jones), and Ertz was among the players listed. Where does he have the veteran tight end going? And what does he have the Birds getting back in return? Let's take a look...

It has become clear that Ertz's future isn't in Philadelphia. The Eagles didn't offer the tight end an extension last season, owing to their cap woes, the presence of Dallas Goedert and what ended up as a disastrous campaign for the veteran. Ertz set career lows across the board in virtually every measure of any kind, a scary sign for a player who just turned 30. On top of all that, Ertz's $12.7 million cap hit is the largest at his position in 2021.

The Eagles can save $8.5 million in cash and on their 2021 cap by moving on, but Ertz is not going to have a market at that price tag. Ertz would probably be looking at something in the $3 million to $4 million range on a one-year deal if he were released, so it wouldn't be surprising if he took a pay cut as part of a deal.

Naturally, with coach Frank Reich and QB Carson Wentz in Indianapolis, the Colts have been popularly linked with Ertz. They already have plenty of tight ends, though, and there's another team I think makes more sense. Bills general manager Brandon Beane proclaimed at the beginning of the offseason that his team needed to upgrade on Dawson Knox at tight end, but the only move Buffalo has made at the position is signing Jacob Hollister to a one-year deal.

Beane has been aggressive -- and successful -- in rehabilitating players who seemed to be struggling elsewhere over the past few years. He has also repeatedly gone after weapons for QB Josh Allen. Dealing a late-round pick and a player on the bottom of the roster in Sweeney for Ertz would give the Bills a well-regarded teammate and a player who was thought of as a premier tight end as recently as a year ago. With Ertz reducing his salary to $3.5 million as part of the deal, I love this low-risk, high-reward move for Buffalo.  [espn.com]