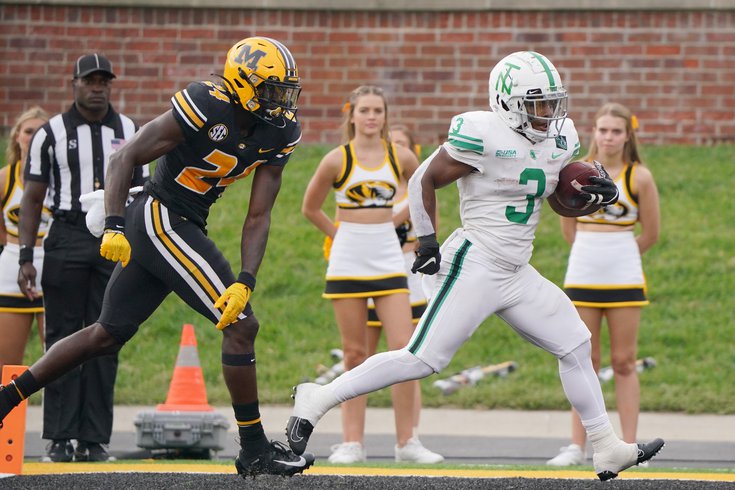 Eagles' running back DeAndre Torrey at North Texas in 2021.

The Eagles have added a new running back to the roster in North Texas undrafted rookie free agent DeAndre Torrey. The team correspondingly waived wide receiver Keric Wheatfall to make room for Torrey, the organization announced on Thursday morning.

Torrey is on the smaller side for RBs, standing just 5'7" and weighing 199 lbs. For a similar size comparison, Darren Sproles was listed at 5'6" while weighing 190 lbs.

Torrey was a Second-Team All-Conference USA selection in 2021. Here are his career college numbers:

At North Texas, Torrey also returned 51 kick in his career, highlighted by a touchdown in 2018 against SMU.

Torrey joins a running back room that includes Miles Sanders, Kenny Gainwell, Boston Scott, Jason Huntley and fellow undrafted rookie free agent Kennedy Brooks. Those first three are roster locks and it's unclear whether the Eagles will carry four backs on their initial 53-man roster. I'd have no qualms with Huntley making the roster, but if the Birds are trying to sneak him on the practice squad, he might get picked up by another squad. Perhaps Torrey is viewed as insurance as a smaller, practice squad back in the Huntley mode if Huntley ends up elsewhere.