Jason Kelce on Cam Jurgens: 'This is my favorite player in the draft' 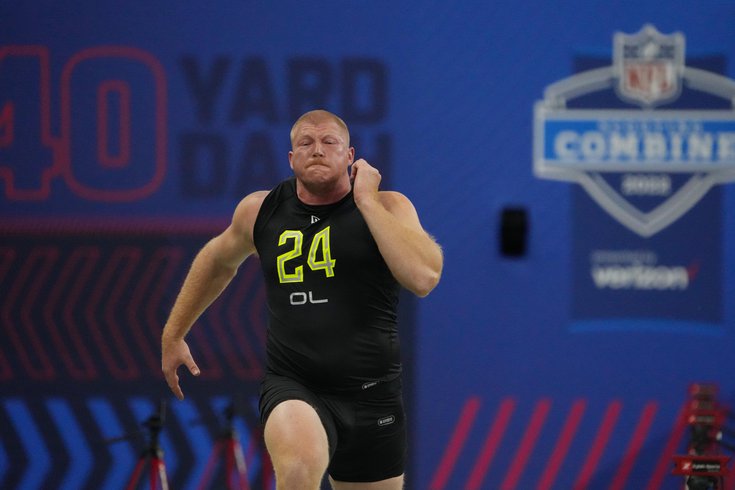 Nebraska center Cam Jurgens runs the 40-yard dash at the scouting combine back in March. He was taken 51st overall by the Eagles in the NFL Draft on Friday.

When he saw the Nebraska center's name still on the board with Philadelphia on the clock, there was no doubt in his mind.

The Eagles took Jurgens with their second-round pick (51st overall) in the NFL Draft Friday night, in a move clearly bracing for Kelce's inevitable retirement.

The pick was made official with Kelce live on air.

Brought on as a guest analyst for Bleacher Report's draft coverage, host Adam Lefkoe read the pick to the 11-year veteran.

"Yeah," he said. "As soon as this guy was available, I knew we were taking him."

Then came a seal of approval from an all-time franchise great that should leave fans feeling good about the future of the position.

"This is my favorite player in the draft," Kelce said. "I'm not just saying that because we picked him. The Eagles have been using me to evaluate some of the centers coming out and of all the guys that I've looked at, like for the past 2-3 years, out of all the guys that compare the most to myself, this guy is him.

"He is so athletic, so fast. You see him out in space, he runs. He's a natural athlete. You see the fluidity. He played tight end, a position convert. He's only been playing offensive line for two years... This guy is a freak athletically. He has the best chance to be a difference-maker at the center position. I like this kid a lot. I really do."

“Out of all the guys that compare the most to myself, this guy is him.” @JasonKelce sees a lot of his qualities in Eagles pick Cam Jurgens

Kelce, 34, is returning for at least one more season. But he's contemplated retirement the past several offseasons. He isn't going to play forever, and all parties are aware of that, so it is a bit comforting to know that he has been working with the Eagles on the transition for when he does call it a career.

And Jurgens is projected to fill in nicely once the starting center job opens up.

At 6'3" and 303 pounds, Jurgens is an undersized but mobile center with a bit of a mean streak to him.

I feel bad for leaving him off my glass eater list pic.twitter.com/iDI5M3VDJB

He'll get to learn under o-line coach Jeff Stoutland, and a solid offensive line group with plenty of depth will allow him the time to develop.

He also comes with a mentality that Kelce and the Eagles love. The rest of the city will too.

"Just because you're an o-lineman doesn't mean you can't run down field and knock a safety out," Jurgens said.