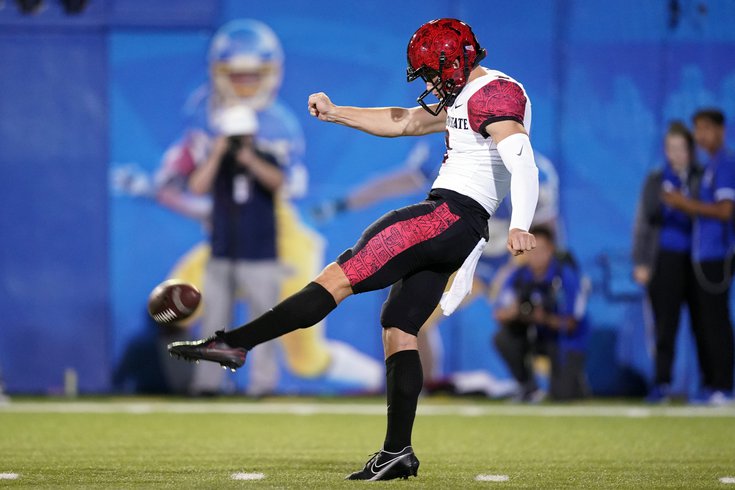 In the first round of the 2022 NFL Draft, the Philadelphia Eagles traded up for Georgia DT Jordan Davis, and traded for former Titans WR A.J. Brown. In Round 2, they took Nebraska C Cam Jurgens, and in Round 3, they may have found a steal in Georgia LB Nakobe Dean.

The Eagles currently don't have a fourth-round pick, but here are our 20 players who could make sense for the Birds on Day 3. The Eagles' next pick is at 154th overall, which is the 11th pick in the fifth round.

• Dameon Pierce, RB, Florida: Pierce didn't get as many opportunities as he should have while playing in a running back by committee offense at Florida. Over his four years in college, he only had 329 career carries, with a season high of 106. In 2021, he had 16 total TDs, and he was a standout during Senior Bowl practices. At 5'10, 218, Pierce has a low center of gravity. He has great balance, lateral agility, and tackle-breaking power. He also has some receiving chops, as he caught 19 passes for 216 yards and 3 TDs, again, in limited usage.

• Cobe Bryant, CB, Cincinnati: The Bearcats had an outstanding cornerback duo in Gardner and Bryant, who racked up 9 INTs and 35 pass breakups over the least four seasons. Bryant is a smart corner who excels in zone coverage, and would be an easy fit in Jonathan Gannon's defense.

• Kingsley Enagbare, EDGE, South Carolina: Enagbare played the "Buck" linebacker spot in South Carolina's defense. The short explanation of the "Buck" position is an edge rusher who will sometimes line up inside on obvious passing downs, but who also sees time as an off-ball linebacker, tasked with coverage duties. He had 14 sacks over the last three seasons in that role. His role will be a little more simplified in the NFL as a 4-3 DE.

• Charlie Kolar, TE, Iowa State: Kolar reminds me a little bit of a poor man's Zach Ertz in that he has great hands, he wins on contested catches against smaller safeties, he uses his body well to shield defenders from the football against man coverage, and he is savvy in finding holes in the defense against zone coverage. Also like Ertz, he's not going to wow anyone with his athleticism, he's not known as a great blocker, and he's not exactly a scary runner after the catch.

• Kyren Williams, RB, Notre Dame: Williams is pound for pound one of the best tackle-breaking running backs in the nation. Whether he's breaking defenders' ankles with combination jukes, or simply staying on his feet through contact because of his outstanding balance, Williams is almost cat-like in his running style, and very fun to watch. He is also thought of a tough, willing participant in pass protection, and he has receiving chops, with 77 receptions over the last two seasons.

• Daniel Faalele, OT, Minnesota: At 6'8, 384 pounds, Faalele will become the biggest human in the NFL when he is drafted. Oh and HEY, he's a former rugby player from Australia who doesn't have much American football experience! Remind you of anyone?

• Jeffrey Gunter, SAM, Coastal Carolina: Gunter had 17 sacks the last three seasons, and he had decent testing numbers at the Combine. If you watched Coastal's game against BYU in 2020 "Mullets vs. Mormons," you saw that Gunter (cough) plays with an edge.

• Verone McKinley, S, Oregon: McKinley doesn't have great size (5'10, 198), and he didn't have a great workout at the Combine, but he is a highly instinctual, productive, playmaking safety who had 77 tackles and 6 INTs for Oregon in 2021.

• Jesse Luketa, EDGE, Penn State: We'll call Luketa a SAM backer, because that's likely what his role would be with the Eagles if they were to draft him. He played both at linebacker and defensive end for Penn State, and while he was very well regarded by coaches there, his overall college production (0.5 career sacks) left plenty to be desired.

• Jerome Ford, RB, Cincinnati: Ford is a transfer from Alabama who broke out in 2021 for Cincinatti, carrying 200 times for 1238 yards (6.2 YPC) and 19 TDs. He is a prospect with a nice combination of balance, vision, and speed, but it was somewhat disappointing that he only weighed in at 210 when Cincy had him listed all season at 220.

• Tyler Algeier, RB, BYU: Over the last two seasons, Algeier has racked up 2731 rushing yards and 36 TDs on 426 carries (6.4 YPC). He's a big back at 224 pounds who has good vision, contact balance, a nose for the end zone in goal line situations, and juuust enough speed to make the occasional explosive play.

• Zamir White, RB, Georgia: White was a five-star recruit out of high school (10th in the nation, per Rivals). He was sort of thought to be the next in line of great Georgia running backs, after Todd Gurley, Nick Chubb, Sony Michel, and D'Andre Swift, but he suffered an ACL tear his senior year in high school, and then another one his freshman year in college. At Georgia, he has not had the same explosive impact as those other great Georgia running back prospects. He is a physical, "one cut and go" downhill runner, who also excels in pass protection. In three years at Georgia, he has 369 carries for 1959 yards (5.3 YPC) and 24 TDs. He is not much of a threat out of the backfield as a receiver, as he only has 17 career catches.

• Hassan Haskins, RB, Michigan: The Eagles can use a younger, more durable version of Jordan Howard. Haskins is a big 228-pound between the tackles banger who is going to get you the yardage that is there, but isn't much of a threat for home runs. He'll be a chain-mover in the NFL, and would be a good fit as a rotational back for any run-heavy offense.