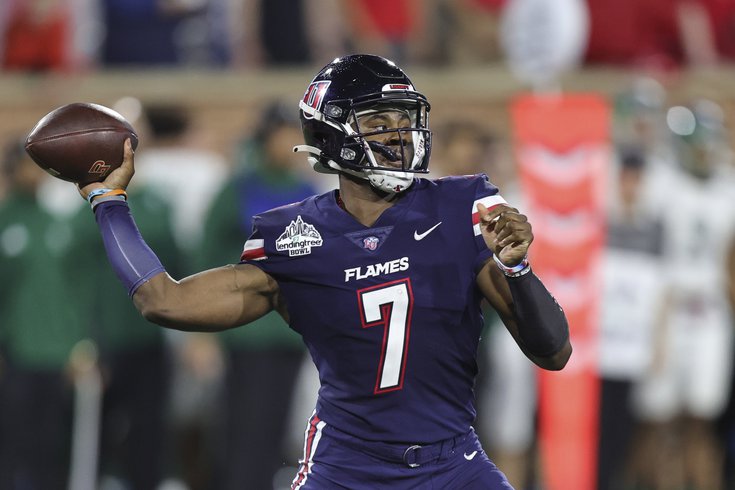 As you're well aware, the Philadelphia Eagles have three first-round picks in the 2022 NFL Draft, and 10 picks total, which should make mock draft season fun this year.

Fun, right? As you saw, Willis is a quarterback who can win with his arm or his legs.

As a runner, he reminds a little of... Jalen Hurts! He's similarly sized, and he can run through tacklers in addition to running by them, though his speed isn't on the same level, as say, Lamar Jackson or Mike Vick.

Does he have an arm? Yes. Yes he does.

How many quarterbacks in the NFL can make that throw?

As a passer, Willis can make throws that Hurts cannot. Willis has substantially more arm strength, and in my opinion better accuracy, particularly while on the run. To be clear, Willis' accuracy is a work in progress, and he made his share of ugly throws in 2021, but his accuracy is probably more correctable than Hurts' with some tweaks to his mechanics. Willis already has Hurts' running skills, but there's no comparison in terms of their respective ceilings as passers.

On the "intangibles" side, Willis has reportedly received high marks during his interviews, and Ian Rapoport reported that he scored a 32 on the Wonderlic.

From NFL Now: On the QB interviews, how Desmond Ridder and Malik Willis have both stood out and why Willis' brain (with an impressive 32 on the Wonderlic Test) has made an impression. pic.twitter.com/YbMsFJfJzT

If there's one quarterback in this draft that I can see the Eagles falling in love with, it's Willis.

Johnson has had an interesting journey to certain first-round pick status. Coming out of high school, he had bad grades and was academically ineligible for scholarship offers. He played a couple of years at a JUCO school, excelled on the field, got better grades, and transferred to Georgia. He was productive in a rotational role, but transferred to Florida State where he could get more playing time.

Johnson caught my eye early during the college football season, when he was disruptive all night in a game against Notre Dame. As you'll see in the video below, Johnson played all over the line. Right side, left side, hand in the dirt, standing up as a 3-4 OLB, and even over the nose. That versatility should be appealing to the Eagles.

In 2021, Johnson had 12 sacks and 2 forced fumbles. So far during the draft process, Johnson had a fantastic Senior Bowl showing, and he tested very well at the Combine:

Johnson has good speed, an assortment of pass rush moves, and as noted above, the ability to play in multiple schemes.

Some draft analysts have Johnson going top 10. He very well may go that high. I think the Eagles would do well if they were able to land whoever is available among Johnson, Michigan's David Ojabo, and Purdue's George Karlaftis.

Booth is physical and athletic, and he plays with swagger, confidence, and energy. You can see by this dude's body language that he knows he's good.

Booth has the speed to run with receivers down the field, and he competes on contested catches. If there are knocks on him, it's that's he's a little shorter than ideal, and his while he has shown ball skills and the flare for the incredible catch, he only had 5 career INTs, which in fairness, was spent at times playing behind other future NFL corners.

He has instincts, speed, and some pop:

Oh, and yes, he lit up the Combine.

As expected, Chad Muma put up an elite #RAS. Probably a bit disappointed in his own 40 time, even though it's still a very good one. pic.twitter.com/aDXF9n916c

A couple years ago, former Wyoming linebacker Logan Wilson was a popular name to pop up in Eagles mock drafts, but he was selected 65th overall by the Bengals. In his second season in Cincinnati in 2021, Wilson has 92 tackles, 4 INTs, a forced fumble, and a sack.

Muma could be another Day 2 guy in Wilson's footsteps, and the Eagles still have a pretty obvious need at linebacker.

He has good size, and he uses it well, boxing out defenders on in-breaking routes, and winning 50-50 balls down the field and in the red zone. He also shows good hands at times, though he will have occasional concentration drops. A look at his true freshman season:

Normally, Ross would be thought of as a first-round pick. However, he comes with significant injury risks. In his sophomore season in 2019, his production fell off some (66-865-8), and in 2020, he missed the entire season with "congenital fusion in his spine," a condition he has had since birth, but only found about after getting x-rays on what was thought to be a stinger.

NFL teams will certainly have interest in the long-term effects of his condition, but if his medicals checked out at the Combine, this is the kind of player that teams will be kicking themselves and questioning their draft processes if they pass on him until Day 3 and he regains his freshman year form. In my opinion, the third round is where his value should be, in terms of risk vs. reward.

Nick Sirianni ran his fair share of 2-TE sets in 2021, and his No. 2 TE only had four receptions. The Eagles could use a more well-rounded TE2 who can be a threat as a receiver. The 2022 draft is thought to be one of the deeper tight end drafts in recent memory, and there could be value on Day 3.

Ruckert is thought of as an aggressive, tough blocker.

He didn't put up huge numbers at Ohio State playing in an offense with Garrett Wilson and Chris Olave. In 2021, for example, he had 26 catches for 309 yards and 3 TDs. However, when the ball came his way, he was a reliable receiver, and a threat in the red zone.

In an Eagles offense where DeVonta Smith and Dallas Goedert are going to be the priorities in the passing offense, a player like Ruckert, who doesn't demand much of a target share but will make the plays when they come his way, would make a lot of sense as a TE2.

Pierce didn't get as many opportunities as he should have while playing in a running back by committee offense at Florida. Over his four years in college, he only had 329 career carries, with a season high of 106. In 2021, he had 16 total TDs, and he was a standout during Senior Bowl practices.

At 5'10, 218, Pierce has a low center of gravity. He has great balance, lateral agility, and tackle-breaking power. He also has some receiving chops, as he caught 19 passes for 216 yards and 3 TDs, again, in limited usage. A look:

There are a ton of hefty, tackle breaking backs in this year's draft, and the Eagles should be able to land one on Day 3. Pierce is one of my favorites in this class.

One of the popular first-round picks for the Eagles in early mocks drafts has been Iowa center Tyler Linderbaum, who has labeled as a Jason Kelce clone. If Kelce were retiring, then sure, I can absolutely see the fit. However, while no official decision has been made yet, it feels like Kelce will return in 2022, which would make Linderbaum a poor use of resources in the teens. I mean, are you really going to draft a center in the first round and have him sit for a year?

An alternative on Day 3 could be Jurgens, a lesser prospect than Linderbaum, but with similar athletic traits.

Give Jeff Stoutland a year to work with Jurgens behind the scenes, and see what he can mold him into.

In 12 games for Tennessee in 2021, Taylor had 60 tackles, 2 INTs (one of which was a pick-six), 6 PBUs, and a FF. He enrolled at Tennessee as a wide receiver, but flipped to the defensive side of the ball.

Taylor is a physical, versatile corner/safety with some ball skills, and a fun player to watch. I love the play below at the 1:13 mark, where he smashes the receiver trying to block him, and then makes the tackle for loss.

I think a full-on conversion to safety is in Taylor's future.

Matt Araiza may be everyone's favorite punter in this year's draft, but Camarda is really good too. He has averaged at least 46.6 yards per punt in each of the last three seasons at Georgia. He's also an athlete:

Do we have punter highlights? Yes we do!

Arryn Siposs turned into a Shankopotomous machine at the end of the season. The Eagles shouldn't lose their minds and use some sort of valuable resource on a punter, obviously, but in the sixth round? Sure, what the hell.