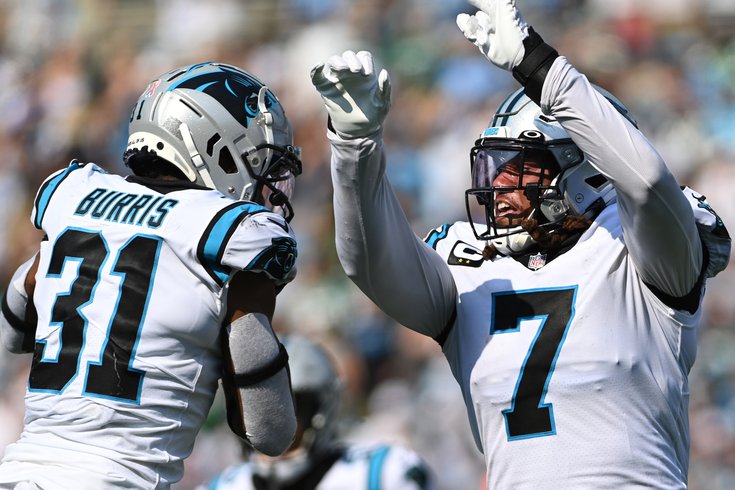 Panthers starters S Juston Burris and LB Shaq Thompson are both out for the Panthers.

It's simply not an Eagles season without some serious injury (and other) drama. On Sunday, they'll face a Carolina Panthers team that will also be missing their fair share of noteworthy players.

Here is the Eagles' and Panthers' inactives, with analysis.

• RT Lane Johnson: Johnson will not play on Sunday, due to his not-yet-revealed personal matter.

However, Jordan Mailata, who sprained his knee during practice prior to the Eagles' Week 3 game against the Cowboys and missed two games as a result, will be back in the lineup.

Andre Dillard filled in for Mailata against the Cowboys and Chiefs. He played well against a group of Cowboys pass rushers that did not test Dillard's ability to anchor against power rushes, and then also played reasonably well against an injury-depleted Chiefs defensive line.

There's a decent chance that Mailata could flip sides and start at RT in place of Johnson, with Dillard staying at LT. My best guess at the Eagles' offensive line starters for Sunday:

The Eagles could also play Mailata at LT, with Nate Herbig at RG, and Driscoll at RT.

• QB Gardner Minshew: Joe Flacco remains the No. 2, for now.

• DT Marlon Tuipulotu: No need for an extra run stuffer against a team unlikely to run it a lot with Christian McCaffrey likely out.

• OG Sua Opeta (COVID): Opeta was active last week against the Chiefs after getting called up from the practice squad.

MORE: Rounding up the experts' predictions for Eagles vs. Panthers | Mailbag: Early look at the Eagles' biggest 2022 draft needs

• RB Christian McCaffrey: You all know who McCaffrey is, right? If not, he's the Panthers' best player. The Panthers' backup running backs are Chuba Hubbard and Royce Freeman.

• LT Cameron Erving: Erving is the Panthers' starting LT, though not really a good one, so this was already a weak spot heading into this matchup. With Erving out, rookie third-round pick Brady Christensen or fourth-year player Trent Scott will fill in. To be determined whether Christiansen or Brady play LT, or if they play RT, and RT Taylor Moton slides over to LT.

Fourth-year LB Jermaine Carter Jr. could see a bigger role with Thompson out.

• The rest of the Panthers' inactives:

• CB Jaycee Horn (IR): Horn was the eighth overall pick n the 2021 NFL Draft. He broke multiple bones in his foot, and while he could return potentially late in the season, he'll be shut down for months.

• CB Stephon Gilmore (PUP): After Horn went down, the Panthers traded for former Jaguars CB C.J. Henderson, followed by Gilmre, the former Defensive Player of the Year for the Patriots. Gilmore is still on the PUP list, so he can't play until after Week 6.

• S Juston Burris (IR): Burris is a starting safety for the Panthers. He left the Panthers' Week 3 win against the Texans with a groin injury, and subsequently went on IR.

• iOL Pat Elflein (IR): Elflein began the season as a starting guard. He was replaced in the starting lineup by John Miller.