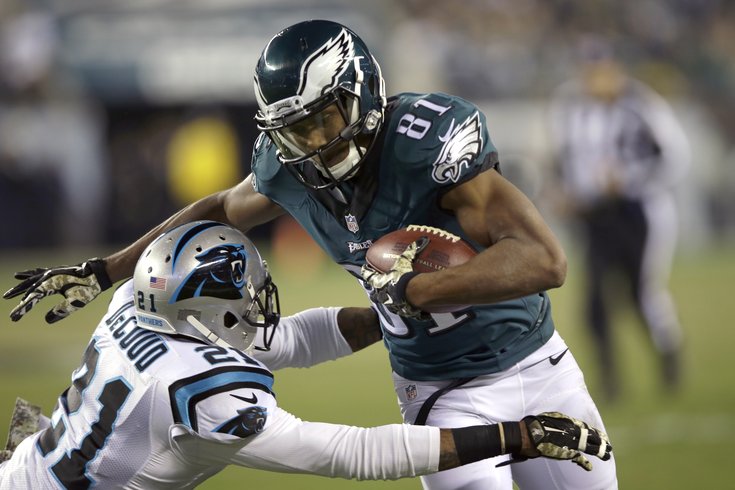 Jordan Matthews had a big game against the Panthers last season.

At 5-0 are the Panthers for real? And more importantly, are the 3-3 Eagles?

Sunday night's game at Carolina is shaping up to be a no-win situation for the Birds. If they win in any way other than a blowout, everyone will say it was because the undefeated Panthers were frauds. If they lose, well, it'll make for a looooong bye week filled with QB controversy and Chip-Kelly-on-the-hot-seat talk. But hey, at least there's that Temple-Notre Dame game next Saturday night...

Coming off a big Monday night win over the Giants, the Eagles find themselves atop the NFC East at just 3-3. Now, they head to Charlotte to take on a much different (read: improved/healthier) Panthers team than they demolished at the Linc last season.

Will the Birds head into the bye with their first plus-.500 record of the season or will they take a step back following two straight wins?

Over at Bleeding Green Nation, I'm pretty sure Brandon Gowton hates the Eagles. For the third straight week, he's picked against the Birds, although this time he's not alone. As for the local broadsheet, both Jeff McLane and Zach Berman of The Philadelphia Inquirer predict a three-point win by the Panthers. And at The Daily News, Paul Domowitch sees a 17-16 Panthers win.

As for the national outlets, here's how they see the Eagles' Week 7 matchup playing out...

•    At ESPN.com, 11 of their 13 writers are picking the Pathers, with the two lone Eagles supporters both being for Eagles players, Ron Jaworski and Eric Allen.

•    All eight CBSSports.com writers are picking the Panthers.

•    It's also a clean sweep over at USA TODAY, with all seven of their writers picking the Panthers.

•    And if you want to go strictly by the numbers -- and I'm not so sure Eagles fans will -- Nate Silver and the FiveThiryEight crew think the point spread should be closer to 4.5 points in the Panthers' favor and that there's a 66 percent chance the Eagles lose Sunday night.

I really like this matchup for the Eagles, especially on the defensive side of the ball. The Panthers' strengths offensively match up well against the Eagles' strengths defensively. The Panthers have the third ranked rushing offense, and the Eagles stop the run as well as any team in the NFL. Additionally, their best weapon in the passing game is tight end Greg Olsen, and the Eagles have a trio of good cover guys in Jordan Hicks, Malcolm Jenkins and Walter Thurmond patrolling the middle of the field.

The Panthers' 5-0 start came against teams with a combined record of 9-20, but they are a legitimately good football team with a pair of outstanding linebackers in Luke Kuechly and Thomas Davis. I do like the Eagles' chances to take shots down the field, however, against a pair of suspect cover safeties in Roman Harper and old friend Kurt Coleman, as long as Sam Bradford can reach his receivers.

Although football in many ways is the toughest of the four major sports to quantify, I like the work the Football Outsiders crew does. After crunching the numbers, they come up with an all-inclusive statistic called DVOA. They have a bunch of other metrics too, but this is what they’re most known for. Did you know the Eagles are currently ranked 7th in DVOA? Repeat: THE EAGLES ARE RANKED SEVENTH IN TOTAL DVOA! IN THE NFL!

Know who is lower that sixth? This week’s opponent, the undefeated (and 10th-ranked) Carolina Panthers. Add in the fact that largely the same group of Panthers got boat raced at The Linc by Mark Sanchez last year, and it feels like the Eagles really do have a shot on Sunday night. After all, they did just win two games by 20+ points, even if they didn’t feel quite that impressive.

The Panthers got a really nice win up in Seattle, but before that game, their schedule was an absolute joke. Cam Newton is a good quarterback, but there is only so much he can do when Greg Olsen is his best weapon. It’s a lot tougher to pick on Byron Maxwell when Ted Ginn is your best receiver. And man, I love the way the defense (front seven, especially) is playing right now.

Sam Bradford will have to play competently (which he didn’t on Monday), but I think the Eagles are starting to figure a few things out. I’ll say the Birds finally break through on the road here.

I, like a lot of people, aren't buying in on the Panthers quite yet despite their 5-0 record. Sure, they beat the Seahawks in Seattle, a feat that only a year ago seemed nearly impossible; but the Seahawks haven't been nearly the same team this season, despite their 20-3 win over the 49ers on Thursday night. Their other four wins have come against teams that have combined for just seven wins through the first six weeks of the NFL season -- the Jaguars (1-5), Texans (2-4), Saints (2-4), and Buccaneers (2-3). Furthermore, their only two home wins (NO and HOU) were both one-score games and their average margin of victory is just 8.1 points.

All that being said, I don't have a good feeling heading into Sunday night's matchup in Charlotte.

First, there's the revenge factor. The Eagles EMBARRASSED the Panthers on national television last season, and it's safe to assume that a now healthy Cam Newton hasn't forgotten about the nine-sack, four-turnover night he had in Philly.

Then there's the fact that the Eagles are coming off a short week after beating the Giants on Monday night. Since Chip Kelly's arrival in Philly, the Birds are just 2-6 on short rest (i.e. Sunday games after a Monday nighter, as well as Thursday and Saturday games) including the postseason. That's not a great sign, especially considering their only road win in those games was last season's Thanksgiving Day beatdown of the Cowboys.

If Newton can protect the ball against an Eagles defense that has forced the second-most turnovers in the NFL, the Birds will really be in trouble. They've forced at least three turnovers in each of their three wins, but have failed to do so in each of their three losses. Meanwhile, the Panthers have been surprisingly good at protecting the ball this season (unlike the Eagles); they've turned the ball over just five times all season (currently fourth in the NFL). The Eagles, on the other hand, have turned it over more than any team in the NFL with the exception of the Detroit Lions. That doesn't bode well against a Carolina defense that ranks sixth in the league in takeaways.

I think the Eagles can win this game, but in the end, I see a tight, low-scoring game that doesn't go their way, sending them into the bye with a sub-.500 record for the first time under Kelly.