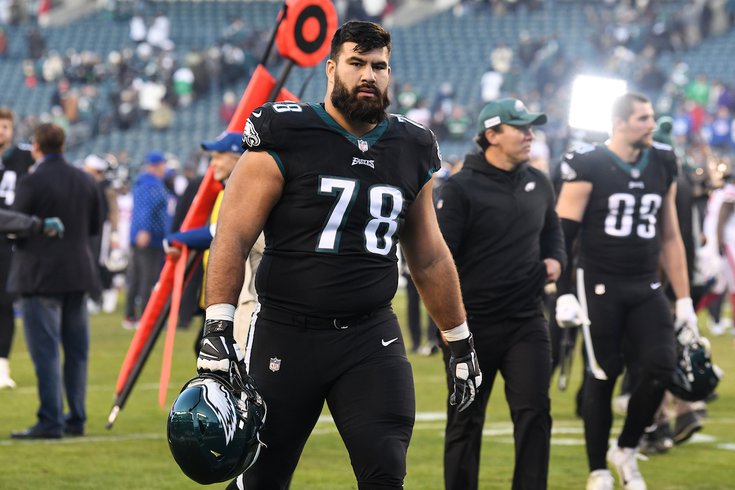 During the offseason, we'll be taking a close look at Philadelphia Eagles players of interest who are currently on the roster, but maybe we don't know a lot about them just yet. Today we'll look at interior offensive lineman Sua Opeta.

Coming out of Weber State, Opeta had some intriguing athletic measurables, notably his 40 time, and some explosiveness traits (vertical jump, broad jump, and bench press).

Over the last two seasons, Opeta has started five games, including a start in the Eagles' playoff loss to the Buccaneers. In those games, Opeta has had difficult blocking assignments. In his two starts in 2020, both against the Giants, he mainly saw Leonard Williams, who had 11.5 sacks that year.

We did a deep dive on Opeta on our nation's birthday last summer, and I was pleasantly surprised by his solid play.

He exhibited the athleticism noted above, as he was able to get on the move as a puller as well as executing double teams and then getting to the second level. He also showed that he was capable of getting down the field in the screen game.

In pass protection, he lost some reps, but generally speaking did a good job on an above average starting DE/DT. I was also impressed with his recognition of stunts and blitzes for a player with limited experience.

For this exercise, I mainly focused on his start against the Commanders, since he had a very difficult assignment in Allen. One again, I saw more good than bad. A look:

Opeta could be an important player for the Eagles in 2022 because he could be in line to move up into Nate Herbig's role as an interior lineman off the bench who can play both sides. Herbig has been a third stringer in each of the last two seasons, but he has played a lot of snaps. In fact, in 2020 and 2021 combined, Herbig played 1,493 snaps, third-most among Eagles offensive linemen. Opeta, even further down the depth chart, has played 394 snaps the last two seasons:

The Eagles' current depth chart along their offensive line currently looks something like this:

In my opinion, Opeta is better than Herbig. He is highly likely to make the team and play meaningful snaps once again in 2022.