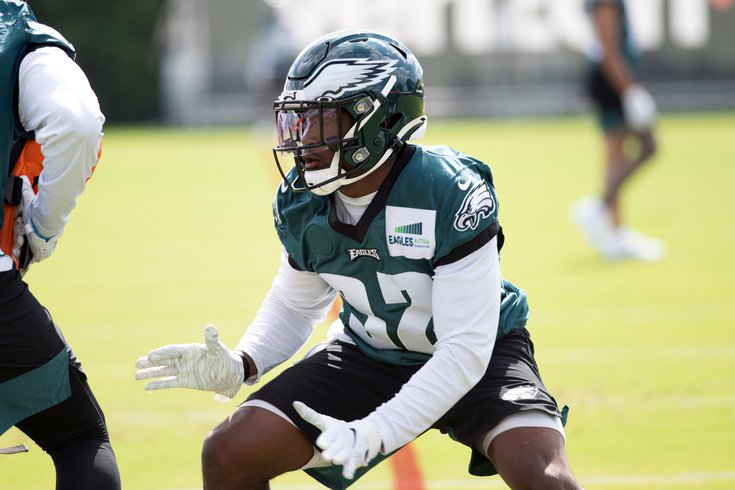 During the offseason, we'll be taking a close look at Philadelphia Eagles players of interest who are currently on the roster, but maybe we don't know a lot about them just yet. Today we'll look at running back / kick returner Jason Huntley.

While watching another player during the Eagles' meaningless Week 18 game for a different player review (spoiler: it was Andre Dillard), one of the players who caught my eye in that game was running back Jason Huntley.

If you'll recall, after spending pretty much the entirety of the season on the practice squad, Huntley got to play in that game, and he showed some legitimate juice both as a runner and a kick returner. Heading into the Eagles' playoff game against the Buccaneers, there were some who were calling for Huntley to remain active in the playoffs if only for his kick return abilities. So what the hell — Let's go ahead and review Huntley on a nice Saturday in June. 🤷‍♂️

First, for your convenience, I cut up all 16 of Huntley's touches in that game:

If you watched that, as you can see, Huntley has legitimate speed and shiftiness, though he's not exactly a pile-pusher or a guy who is going to break a lot of tackles. He is also probably the best kick returner on the team, right?

In 2021, the Eagles were the 30th ranked team on kick returns, according to DVOA. Opposing teams did not fear guys like Jalen Reagor, Kenny Gainwell, Quez Watkins, or Boston Scott, so they often opted to kick for hangtime and land the ball inside the 5, forcing a return, instead of trying to boot through the back of the end zone. This strategy worked, as non-Huntley returners averaged a paltry 17.6 yards per kick return.

In an extremely small sample size, Huntley had three returns for 84 yards, or 28.0 yards per return. The Eagles' average starting field position on Huntley's three returns was the 32 yard line. In college at New Mexico State, Huntley had 59 career kick return attempts, averaging 25.8 yards per attempt, with 5 TDs. He ran a 4.40 40 at his college pro day.

Huntley is probably the fourth running back currently on the Eagles' depth chart, and could fall further if they add a big back to the rotation. He is a bubble player, but in my opinion one who should be given a real opportunity to make the roster. The Eagles haven't shown that they care all that much about kick returns, or Huntley would have been active against the Bucs in the playoffs. Maybe their acceptance of a non-threatening kick return game (relatively speaking) should change?