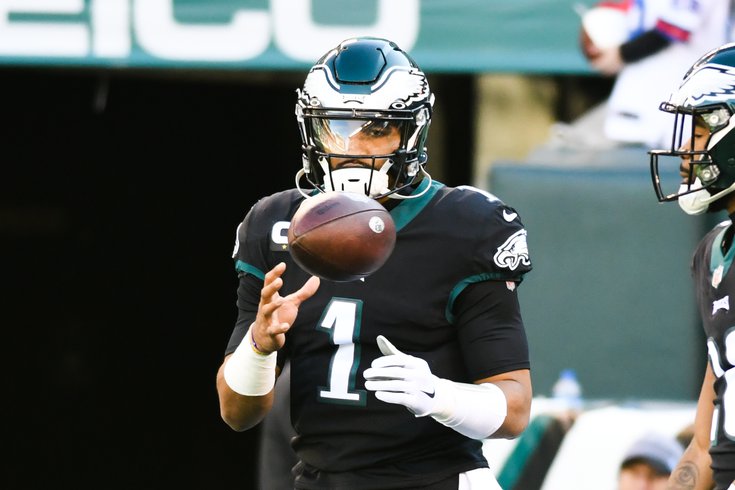 Here's where people around the country have the Eagles ranked heading into Week 17 of the 2021 regular season. Oh, and here's our version of these sellout rankings, too.

The Eagles are tied with the Cowboys for most defensive touchdowns in the NFL at five. That's mostly because of Slay, who has returned two fumbles for touchdowns and also has a pick-six on the season. Slay, who was named to his fourth Pro Bowl last week, has three interceptions, nine passes defensed and five tackles for loss while holding opposing quarterbacks to a rating of 77.2 when throwing in his direction. His high level of play has boosted a defense that has yielded the second-fewest receptions of 20-plus yards in the NFL (30) -- behind only the Buffalo Bills -- and ranks ninth against the pass (215.6 yards per game).

#JimmySays: I didn't realize that the Eagles had a share of the lead in defensive touchdowns, but with five I guess that makes sense.

The boo birds were out in full force as the Eagles bumbled their way through an ugly first-half performance against the Giants. Luckily for Nick Sirianni's team, its divisional rivals from New Jersey are terrible, a reality that allowed the Eagles to recover from a slow start. Jalen Hurts engineered three touchdown drives in the second half, and the Philly defense had no problem shutting down an inept New York attack fronted by overmatched first-time starter Jake Fromm and, later, eternal journeyman Mike Glennon. Hurts was a non-factor in the running game for the second straight week -- a sign his injured ankle still isn't close to 100 percent.

#JimmySays: There were some boos, but I wouldn't say they were in full force. As for Hurts' ankle, he did run eight times for 38 yards and two TDs against Washington, and he hasn't looked hobbled to me.

The Eagles have already exceeded my preseason expectations for them, and credit Nick Sirianni’s well-publicized pivot to the run game that coincided with the Eagles’ turning their season around. The path is clear for Philly to grab a wild card spot, and if it shakes out that way I think the Eagles can just be happy to be there.

#JimmySays: I had them at six wins prior to training camp, then seven at the conclusion of camp. Oops.

Pretty good holiday in Philly, the Iggles moving into a projected wild-card slot and essentially locking up the first-round pick from Indianapolis that was originally a conditional second-rounder when Wentz was traded earlier this year.

#JimmySays: The 49ers, Vikings, and Saints all lost, which was huge for the Eagles' playoff odds.

Philadelphia's Week 16 win over the New York Giants sums up why it's hard to peg this team in 2021.

In the first half of the game, the Eagles looked mediocre at best, especially on offense, But whatever head coach Nick Sirianni said at halftime worked. After intermission, the Eagles got the ground game that has been the team's signature in recent weeks going, while the defense completely shut down New York. A 3-3 contest at the break was a rout when the game ended, and at 8-7, the Eagles have worked their way inside the NFC playoff bracket.

After the win, QB Jalen Hurts credited the team's resiliency for keying six wins over the team's last eight games.

"Another week where we came out and didn't execute like we wanted to, but I've always admired the grit and perseverance of this team," he said. "We have so much character in how we do things, how we operate, how we're able to overcome."

That resiliency will be put to the test soon enough. After next week's trip to Washington, the Eagles host the surging Cowboys in a Week 18 matchup that could well decide whether the Eagles make the playoffs.

#JimmySays: ...unless they clinch before then.

At halftime, the Eagles were tied with a putrid Giants team 3-3. They pulled away in the second half, and they're in decent shape to make the playoffs, but it's hard to know what to make of this Philly team.

#JimmySays: They're really not that hard to figure out, in my opinion. They have a strong rushing attack, a young, inconsistent quarterback, and a defense that has easily handled the bad teams, but struggled against the good ones.

Here come the Eagles. They have a real chance to be a playoff team. Win two and they are in, which would be a heck of a story.