Eagles run defense was utterly dominant vs. Panthers, with GIFs and stuff

You didn't have to watch much of Thursday night's 28-23 win over the Panthers to realize that the Eagles run defense was playing out of its mind – as it has much of the season.

Kareem Hunt is the only player to rush for more than 35 yards against the Eagles this year.

In the first half alone, the Birds stopped the Panthers for no gain or behind the line of scrimmage five times. They did it another four times in the second half. And we're only talking about running plays here, so that's not even counting the two sacks by the Eagles defense (or the time Fletcher Cox hit quarterback Cam Newton's arm and forced an interception).

When the dust settled, Carolina finished the game with 25 carries for a total of 80 yards, 71 of which came on Newton's 11 carries and another eight came on one carry from wideout Curtis Samuel.

No, that's not a typo. Panthers running backs finished the game with ONE YARD on the ground ... on 13 carries.

For those of you keeping track at home, that means their three running backs – Jonathan Stewart, Christian McCaffrey and Fozzy Whittaker, who left the game injured after just one carry – averaged a whopping 2.77 INCHES per carry.

That's actually hard to do.

The Panthers ground game minus Cam Newton had been pretty abysmal to begin with, with their running backs averaging just 2.84 yards per carry on the season and just 60 yards per game. When you add in Newton's numbers, the production jumps to a less embarrassing 95.5 yards per game on 3.4 yards per carry.

In other words, before heaping all this credit on the Eagles, it's worth noting that the Panthers have been awful running the ball this year.

But that doesn't change the fact the Jim Schwartz's injury-plagued unit turned in yet another masterful performance on Thursday night, not only playing defense against Newton and the Panthers but against referee Pete Morelli and his crew as well.

"As I said after the game, it's just a credit to the players, the coaching staff for getting those guys ready to play," head coach Doug Pederson said on Monday. "I don't think I've been a part of a team that's had as many injuries on the defensive side, or at least one side of the ball that's the next-man-up mentality. Guys are filling in and stepping in, and doing a nice job. We've got some young players that are playing a lot of minutes right now.

"Then, in Nigel's [LB Nigel Bradham] case, I felt like [that was] probably his best game to date. He and [LB] Mychal Kendricks both, going back and watching the tape, those guys are flying around, they're making plays. That's what we have to have out of that group."

And on Thursday night, that's exactly what they got.

If this was an outlier performance, maybe it wouldn't be such a big deal, but the fact that they've been able to consistently win the battle at the line of scrimmage has been a major key to the Eagles' 5-1 start. In short, they've been dominant.

That number includes all rushing yards allowed by the Birds, but if you just look at running backs, they've allowed just 240 rushing yards to them through six games.

But their most recent performance against the Panthers was by far their best.

Here's a look at each of those nine previously mentioned plays in which the Eagles D stopped Carolina at or behind the line of scrimmage (not including their two sacks or the pair of passing plays they snuffed out in the backfield).

Bradham was a beast from start to finish last night, and even overcame a scary injury in the second half. He went unblocked on this one, which, from an offensive standpoint is not ideal on a slow-developing outside run. We'll see him again, unlike Whittaker, who injured his ankle on the play and had to be carted off the field.

It looked like Stewart was maybe going to spin out of that first tackle and fall forward for the first down. Instead, Stewart was met by safety Malcolm Jenkins, who stopped him at the line of scrimmage with a Dawkins-esque hit, before Kendricks pulled him down.

The Panthers brought wideout Curtis Samuel in motion, but would up giving the ball to Stewart up the middle. Vinny Curry was ready.

It was once again Jenkins coming up to make the stop, but the credit here belongs to the Eagles front seven, who got a ridiculous amount of penetration up the middle, essentially leaving McCaffrey nowhere to go. By the time the rookie got the ball, all four of the Eagles defensive linemen were at least two yards into the Panthers backfield. 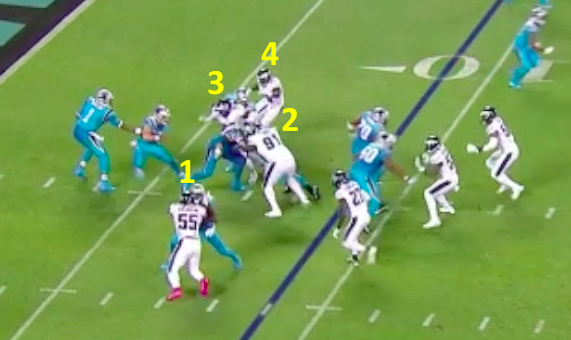 It was also a hell of a play call by Schwartz, because if Jenkins wasn't there – and if Tim Jernigan didn't trip him up at the last second – there was quite a bit of green between McCaffrey and the next Eagles defender. But as was the case for much of the night, the Birds were doing a great job of making tackles.

PLAY 6 – Picking up where we left off

The second half brought a lot of the same for the Panthers, as Curry again got into the Panthers backfield to stop Stewart behind the line of scrimmage. Suffice it to say, this was not the best game plan from Carolina's offensive coordinator.

PLAY 7 – Why are you still trying to run?

Another first down run by the Panthers – and another series in which they'll be playing from behind the sticks. For being one of the better first-down teams in the NFL, the Panthers really did a terrible job of getting into manageable second and third down situations.

On this one, it was Bradham getting into the backfield and combining with rookie Derek Barnett (and Kendricks) for the tackle.

Newton had done a nice job on the ground against the Eagles defense up until this point, including a 16-yard touchdown run. But these runs to the outside were getting snuffed out all night, and this one was no different.

Look at the play made by defensive end Chris Long to shed his blocker and make the leaping tackle. And perhaps the best part of it? Even if he didn't bring Newton down, Jenkins was right there waiting to finish off the play.

Newton's decision to tuck it and run here turned out to be the wrong one. And in the least surprising turn of events, it was Kendricks and Bradham, who had both been flying around the field making plays all night, in to get the stop.

Here are all nine of the above plays in one continuous video:

Overall, it was a stellar performance from the defense, specifically their front seven. The kind of performance that puts the rest of the NFL on notice. And maybe even the history books too.

Eagles are 20th team in NFL history to rush for 750+ yards and allow fewer than 400 rushing yards after 6 games.