On Thursday night, the Philadelphia Eagles went down to Charlotte on a short week and took it to a very physical Carolina Panthers team, winning 28-23. As always, win or lose, we hand out 10 awards.

1) The 'Hey Look, the Eagles Are Good Again' Award: The Eagles

Let's just go ahead and state the obvious. The Eagles are a good football team. There. Done.

Let's also just go ahead and state that Carson Wentz is very clearly a franchise quarterback that the Eagles can build around for the next decade-plus. He has the arm, mobility, leadership skills, smarts, and there's no question whatsoever about his toughness after the beating he took Thursday night.

Carson Wentz is a stud, and if you disagree, you have no idea what you're watching.

(Disclaimer: I hate using any form of the word "grit" to describe a player's play, but that's really what this was.)

Quarterback Cam Newton hurt the Eagles' defense on the ground, gaining 71 yards, but Panthers running backs had 13 carries for one yard. One freaking yard.

Heading into this matchup, the Eagles were allowing 62.8 rushing yards per game, which was second in the NFL. Because Newton ran for a lot of yards, that average will go up a small amount, but the Eagles run defense is stellar right now.

Jordan Hicks left the game with an ankle injury, but no matter. Bradham and Kendricks were everywhere.

Bradham had a big tackle for loss, two pass breakups in very key spots on third down, and a number of clutch tackles short of the sticks. He easily had his best game as an Eagle, and celebrated the victory after the game in style:

Kendricks, meanwhile, had 17 tackles, as a backup.

5) The 'Ice Water in the Veins' Award

Another game, another two huge kicks for Jake Elliott. This time he hit 50- and 48-yarders, in what was a close game.

During his 10-made field goal streak, Elliott has hit six field goals from a distance of 45 yards or longer. That is extremely impressive.

Fletcher Cox was not 100 percent heading into this game, but he was still dominant, collecting a sack as well as a batted pass that led to an interception by Rasul Douglas. This is a completely different defense when Cox is in the lineup. There's little question who the Eagles' best player on defense is.

After the Panthers committed a penalty on an Eagles' PAT, the Eagles had the option of taking the penalty on the kickoff or opting to go for two instead, moving the ball from the two-yard line to the one. Pederson got his big boy pants out and went for two, which the Eagles converted.

That decision was HUGE.

Consider how the rest of the game played out. In the fourth quarter, the Panthers scored a TD, to narrow the lead to 28-22, prior to kicking the extra point. If the Eagles hadn't gone for two earlier, they would have only had 27 points, which would have made the score 27-22. In that situation, it would have been a no-brainer for the Panthers to go for two to try to get the game within three, at 27-24.

Had the Panthers gotten the game within three, they would have only been looking to get a field goal on their final two possessions, and then who knows how the game turns out. We'll never know. All we know is that the Eagles won.

Had Pederson not gotten the two-point conversion and the Eagles somehow lost, he would have been destroyed unmercifully all week long. Instead, he got it, it was an important decision in the game that helped the Eagles win, and we probably won't hear much about it at all. 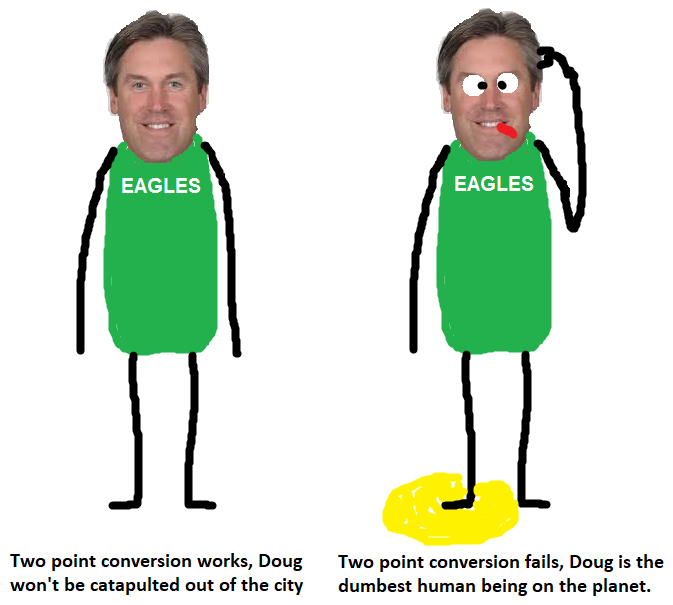 I've said it before and I'll say it again. I admire Doug's willingness to make aggressive decisions, knowing full well that he won't be credited when they work, but he'll be criticized to an extreme when they don't. Embrace the aggressiveness.

So it would appear that the Eagles can indeed win a game without Lane Johnson. Still, Johnson absence was obvious, as the Eagles gave up pressure from the right side of the line for the better part of the first half.

9) The 'Incompetent Buffoons' Award: Pete Morelli and the officials

I can confirm that the Eagles are very unhappy with the way this game was officiated, because, well, they were there and saw what you saw, too. It's amazing that they won despite it being so absurdly lopsided. Consider this stat from Dave Zangaro of CSN Philly (or whatever they're called now):

This was the first time in NFL history one team had over 120 penalty yards while the other had fewer than 10.

10) The 'Catch Up' Award: The Redskins, Cowboys, and Giants

The rest of the NFC East has some catching up to do. Here are the updated NFC East standings:

The Eagles are very clearly in a dominant position going forward in the NFC East. They play three straight home games and then have a bye before they play on the road again. There is a gap of 38 days between this win and the Eagles' next road game.