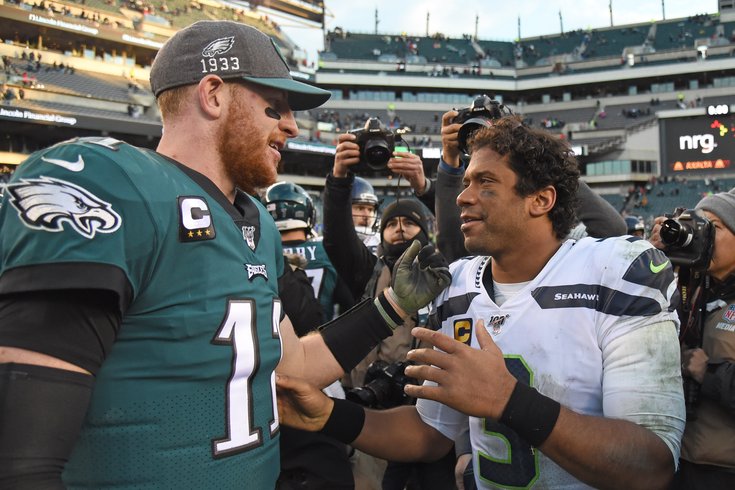 We've been waiting all week, but it's finally game day, and the Eagles are ready to host the Seahawks at the Linc in the wild-card round of the NFL playoffs.

The Eagles (9-7) earned a home game by clinching the NFC East on the final Sunday of the regular season, while the Seahawks (11-5) found themselves relegated to a wild-card spot after their season-finale loss to the 49ers. Now, both teams will do battle as Carson Wentz makes his first playoff start after missing the postseason the last two seasons with injuries. Can the Eagles finally beat Russell Wilson (4-0 against Philly) or will Seattle end the Birds' season in front of their home crowd?

We've already offered up our own predictions, as well as rounded up picks from the local and national media, and broken down all the injuries and matchups to watch on Sunday. Now, as we do every week, let's take a look at some numbers to watch in the form of our five Eagles over/unders.

The total for this game has actually dipped a half point to 45.0 over on Bovada, but we're going to leave it at the previous number of 45.5 for our purposes here. And it actually doesn't make a difference in what I'm predicting for Sunday's game at the Linc.

If you go based off our staff predictions, as we tend to do for this category, it's going to be a resounding under. Four of our five writers are picking the under, and our average total is at 42.8 points. However, yours truly is taking the over in this one, so that's going to be what we ultimately go with. Why? Well, glad you asked...

The Seattle defense is not what it once was, and if the Eagles can clean up the five turnovers they had in their first meeting this season, they should be able to score points on the Seahawks, who finished the regular season ranked 22nd in points allowed and 26th in yards allowed. Furthermore, since holding the Eagles to just nine points back in Week 12, they've allowed an average of 27 points allowed over their last five games and haven't forced a turnover in either of their last two. Meanwhile, the Eagles offense seems to be coming together at just the right time, minus the right half of their offensive line. Sure, that could come back to hurt the Eagles on Sunday, but if they can get Wentz to get the ball out quickly and can mix in a heavy dose of the run — the Seahawks are 28th in the league in YPC allowed and 30th in rushing TDs allowed — then the Eagles offense should be OK.

On the other side, the Eagles' defense can be beat through the air, something the Seahawks were unable to take advantage of earlier this season, largely due to missed opportunities in the form of dropped passes. Wilson had guys open — they'll likely find themselves open again — and if they can connect this time, the Eagles could be in trouble.

If anything, the last meeting between these two teams was an outlier. Neither team's defense is as good, nor their offense as bad, as that 17-9 Week 12 score suggests. That's why I predicted a total of 50 points, and it's why I'm taking the over here.

As we mentioned above, the Eagles had a turnover party in their last meeting with Seattle, and not the good kind. The Birds turned the ball over five times in that one, including four (2 INT, 2 FL) by Wentz. That, obviously, is not going to fly in this one. If the Eagles turn the ball over five times, they're going to lose again. It's that simple. And there's good reason to believe that it won't happen in this one.

In the five games since, Wentz has turned the ball over just three times (INT, 2 FL) and not more than once in any single game. Furthermore, he hasn't turned it over at all in either of the Eagles two most recent games.

That being said, the Seahawks are still third in the NFL in takeaways, so Wentz will have to be careful not to play recklessly. With no Lane Johnson or Brandon Brooks on the right side of his line, Wentz will likely face some pressure today from Seattle, and I think that leads to one Wentz turnover in this one — if I was a betting man, I'd put my money on a fumble — but I don't think it's going to look anything like the last matchup against Seattle. The Eagles have to be putting an emphasis on ball security today, and they'll need that to pay off if they hope to win the game. Seattle is 8-1 this season when winning the turnover battle.

In Week 12, Wilson finished with just 174 passing yards. But, as we mentioned above, there were a ton of yards left out on the field — and the low passing yard total didn't hurt Seattle as they also ran for 174 yards in that game. However, Rashad Penny, who torched the Eagles for 129 yards on 14 carries, including a huge 58-yard TD run, will not be out there. Instead, it will be Marshawn Lynch and Travis Homer, two guys who the Eagles third-ranked run defense should be able to stop. But they'll have to be careful not to devoting too much attention to stuffing the run, because that's when Wilson takes over and catches you sleeping.

On the season, Wilson is averaging just over 260 yards, but Seattle would be smart to let him air it out against an Eagles pass defense that has had its fair share of trouble trying to shut down opposing wideouts. They almost beat the Eagles through the air in their last meeting, and had they connected on a few more deep balls that were most definitely catchable, the Eagles would've lost that one by much more than just one score.

I'm picking a relatively high-scoring game, and it's hard for that to happen without Wilson throwing the ball quite a bit in this one.

If you would've asked me to set this number a few days ago, I probably would've put it at 0.5 and told you to take the under. I was firmly in the camp of those who didn't think Ertz was going to play this week, but he's reportedly been cleared for contact and is going to play against the Seahawks. And while that's great, it's no guarantee that he'll be anywhere near 100% and able to make a meaningful contribution. Still, it's a huge mental boost for the offense knowing that Wentz' most reliable pass catcher will be out on the field.

If the rib injury (as well as the lacerated kidney) doesn't hamper him too much, Ertz could have a big day. But it's hard to bet on that given the severity of the injuries. I think if Ertz can contribute four catches for 40 yards, the Eagles will take that, especially if they're able to get him involved early and force Seattle to pay him the type of attention a player of Ertz' caliber typically demands. If they do that, and get him going right out of the gate, he'll easily hit the over. However, I just don't see him getting a ton of snaps in this one. Just remember, Jordan Howard was cleared for contact last week, and we only saw him for a single snap. The Eagles like to be cautious with injured players, especially when they're as important as Ertz.

This is one of those benchmark numbers for the Eagles, meaning if they hit this number, there's a very good chance they win the game. In 2019, the Eagles are 8-1 in games where they run for more than 115 yards and 1-6 when they run for 115 or fewer. Sure, there's something to be said about teams running more when they're in control of a game, but the Eagles haven't played in many blowouts this season, so that hasn't exactly been the case here.

Against a Seahawks team that has been among the worst in the league against the run — not to mention the Eagles' penchant for long, time-consuming drives — and running the ball seems like a good recipe for keeping Wilson off the field and eventually winning this game.

Unfortunately for the Eagles, Miles Sanders is banged up and fighting through an ankle sprain and Jordan Howard hasn't really played much since injuring his shoulder back in Week 9. On top of that, Brooks and Johnson will both be out, so it could be tough sledding for the Birds. But if Sanders, Howard and Boston Scott are given enough chances, they should still be able to find success against this Seattle defense.