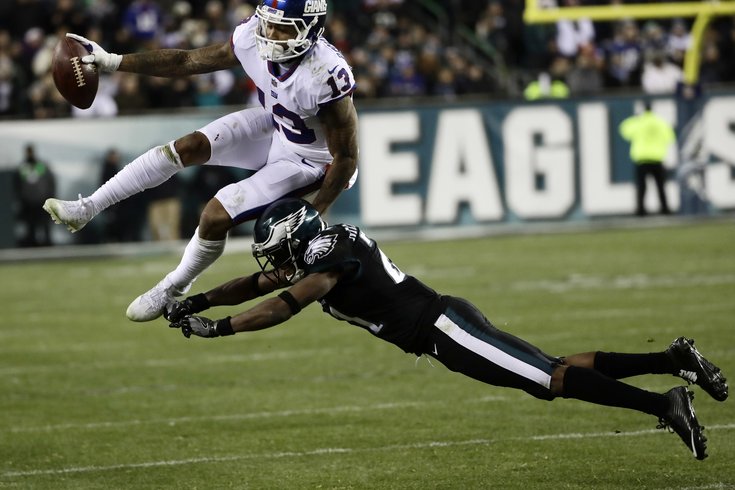 This is Leodis McKelvin. Probably.

The 2016 Philadelphia Eagles season is essentially over, so with one game remaining, we'll continue to look ahead to the offseason. As a starting point, let's take a look at each position and figure out which players will be back in 2017. Today we'll look at the cornerbacks.

Carroll had a nice 2015 season, which ended when he suffered a serious injury on Thanksgiving. He returned to the Eagles last offseason on a modest one-year deal worth $2,047,500, and was eased back into action throughout OTAs, minicamp, and training camp. In 2016, Carroll's play fell off from a year ago, and he'll be a free agent this offseason once again.

Like McKelvin, Carroll is beginning to get a little long in the tooth, as he'll turn 30 in January. Carroll is a hard worker, but he's simply not a good enough option at this stage in his career to start on the outside.

The Eagles need to upgrade both starting corner spots this offseason.

If indeed the Eagles move on both from both McKelvin and Nolan Carroll this offseason, that would leave Mills temporarily as the team's top corner. Ideally, their plan will not include Mills as a starter on the outside, but it certainly might. In my view, Mills may have the skill set to be a quality contributor as a slot corner, where long speed isn't as crucial, and Mills' confidence and aggressiveness can be put to good use, but he does not have good enough long speed to cover fast receivers on the outside.

Whatever the Eagles have in mind for Mills' future, he has become a favorite of Jim Schwartz and is certain to be back.

Again, assuming the Eagles part with McKelvin and Carroll, Brooks will likely be back next season. That would also be contingent on Brooks recovering from his quadriceps injury earlier this season.

Brooks wasn't exactly a stud in the slot early this season, but his loss had a significant effect on the defense, as Malcolm Jenkins had to vacate his safety spot and become the team's slot corner in nickel sets. That hampered Jenkins' ability put himself in position to make game-changing plays. Ideally, the Eagles will have better depth at the slot corner spot than they did a year ago so that Jenkins can play where he can impact games.

Brooks stays simply because the Eagles will need bodies.

Smith played one snap with the regular defense this season, contributing mainly as a special teams player in the rare opportunities that he was active on game day. He'll have to try to make the team again in 2017.

Gratz was added to the roster late in the season after the Eagles' injured reserve list began piling up. Gratz was a former third-round pick (64th overall) of the Jacksonville Jaguars in 2013. In his fourth year with the Jags this season, he was released and claimed off of waivers by the Los Angeles Rams. The Rams released him a month later.

Gratz signed a two-year deal, so this was a move made by the Eagles with the idea in mind that he'll compete for a roster spot in training camp next season.