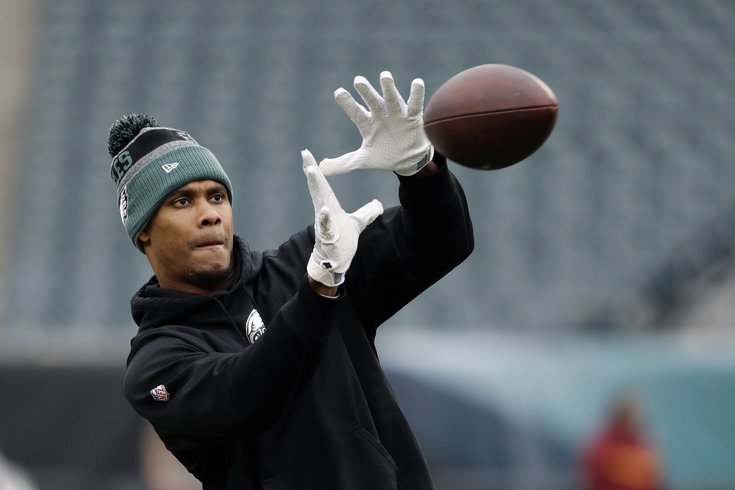 Jordan Matthews makes some plays, but he also leaves plays on the field.

The 2016 Philadelphia Eagles season is essentially over, so with two games remaining, we'll start to look ahead to the offseason. As a starting point, let's take a look at each position and figure out which players will be back in 2017. On Friday we started with the quarterbacks and running backs. Today we'll look at the wide receivers.

Matthews is the only receiver on the Eagles' roster who appears capable of making plays with any kind of consistency, however, he also leaves far too many plays on the field. For example, below average receivers make the catch below.

Shot 4 - Costly play in 1Q. Beautiful throw from Wentz is incomplete in the corner of the end zone. Should've been 6. Two plays later? INT. pic.twitter.com/CT57Kw3Mph

Matthews' contract expires at the end of the 2017 season, which makes him a potential candidate for a new deal this offseason. If the Eagles can get a long-term deal done commensurate with the kind of money a good No. 3 receiver makes, then they should pursue that. Otherwise, the Eagles should avoid handing a Zach Ertz-like deal to a receiver who has not yet topped 1,000 yards, which has become a modest benchmark in the NFL.

#JimmyVerdict: It's not out of the question (although certainly doubtful) that the Eagles would trade Matthews, but he'll likely be back.

Agholor is currently 156th in the NFL in receiving yards per game, at 24.5. Worse, his drops have stalled Eagles drives and his illegal formation penalty negated a long TD pass to Zach Ertz against the Seahawks. Agholor's 2016 season has been nothing short of an abomination.

Unfortunately for the Eagles, they cannot cut Agholor, as it is cost prohibitive.

This season, Agholor will count for $2,557,465 against the Eagles' salary cap. If they cut him, he will cost nearly double that, at $4,941,368, according to overthecap.com. If they trade him, he will count for $2,539,954. Unfortunately, you'd have to find a trade partner willing to part with something for a guy with bad hands who, again, is 156th in the NFL in yards per game despite being on the field for a large percentage of his team's pass plays. Don't hold your breath.

#JimmyVerdict: Stay, but only because the Eagles really have no choice.

Personally, I'm not a big fan of DGB's game, as he is physically gifted, but his gifts don't translate to production on the field. Still, the Eagles have four spots on their wide receiving corps that could use an upgrade, and you can't upgrade them all. Therefore, it feels highly likely that DGB will be back next year, simply as a matter of a lack of numbers.

Treggs caught that deep pass against the Giants. And then... nothing. The Eagles should absolutely be looking to upgrade from him this offseason.

#JimmyVerdict: Go (Or rather, to be clear, he's worth a training camp roster spot, but the idea should be to upgrade here).

Turner had six catches for 80 yards against the Bengals, and looked at the time like the Eagles' second-best receiver, although that's a very low bar. Still, he's short, not particularly fast, and doesn't have a significant role on special teams, so his roster spot on the final 53 will always be at risk.