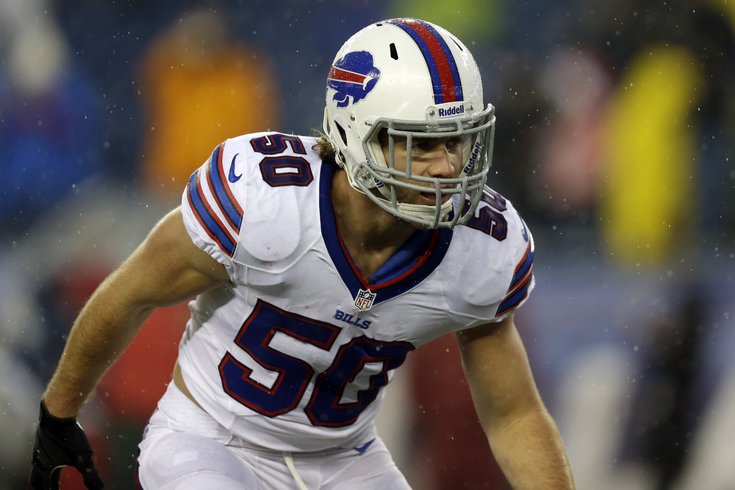 A few hours after Eagles Bills running back LeSean McCoy met with the Buffalo media, the man he was traded for, linebacker Kiko Alonso, hopped on a conference call with the Philly media to discuss what he can bring to the Birds' defense.

Among other things, the former Defensive Rookie of the Year said that he would be ready to go by the start of training camp in July. Alonso missed all of 2014 with a torn ACL.

"I'm doing everything. Not at 100 percent yet, but definitely given where I'm at, I feel very good about it," Alonso said according to philadelphiaeagles.com. "I don't know if I'll be full-go in April or May, but build up so by the time Training Camp starts I definitely feel like I'll be 100 percent full-go."

Perhaps one of the reasons Chip Kelly and his staff coveted the former Oregon Duck is because of his familiarity with defensive coordinator Bill Davis' scheme.

"It's very similar. The terminology might be different, but everything's pretty much the same," Alonso said. "A lot of similarities. Just going over it, I saw tons of ways. I feel comfortable with the defense because I've done a lot of those things before."

We're all very familiar with how much Kelly values his scheme on the offensive side of the ball, but that apparently also applies to the defense.

As for where Alonso fits in the depth chart, that remains to be seen.

Alonso said he'll play inside linebacker for the Eagles, something he's already talked about with the team. Currently, however, both those positions are occupied -- DeMeco Ryans and Mychal Kendricks are the current starting inside linebackers.

"I'm just going to go out there and do what I do and just give that organization and the fans my best," he said. "That's all I can do."

Although the 24-year-old said that he "can't wait to get to work with those guys," that day may never come if the Eagles see a logjam forming at the position and decide to more either Kendricks or Ryans.

But what it comes down to is how he plays on the field. Alonso said he won't feel any added pressure to perform well because he was traded for a Pro Bowler in McCoy.

"I'm just going to go out there and do what I do and just give that organization and the fans my best," he told reporters. "That's all I can do."

He knows a little about the passion of Philly sports fans as well, since his older brother, Carlos, is an infielder in the Phillies farm system. Last season, once Carlos was promoted to double-A Reading, Kiko was able to attend a few games.

"Those Reading fans are definitely very passionate. I can only imagine how passionate they are for the Phillies and the Eagles," Alonso said. "I've heard nothing but good things about all of the fans in Philadelphia."

Hopefully Alonso wasn't paying attention to Twitter on Tuesday evening. He would have gotten a chance to see just how passionate those fans can be.

Just a warning, Kiko, you're not in Reading anymore...

As expected, the Eagles agreed to terms on a six-year contract with former Seahawks cornerback Byron Maxwell.

The deal was first reported locally on Sunday by PhillyVoice.com’s Jimmy Kempski.

A sixth-round pick out of Clemson in 2011, Maxwell had spent his entire career with the Seahawks, helping Seattle form its Legion of Boom defensive backfield.