Goedert is poised to be one of the NFL's best tight ends in 2022. 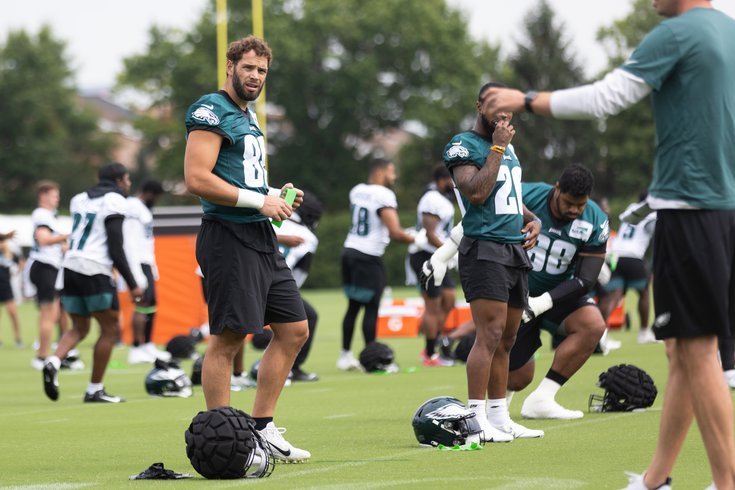 Dallas Goedert was the Eagles' first draft pick coming off their legendary Super Bowl win in 2018. That's a spot where a player feels destined to keep that great run going, but Goedert was only TE2 on the depth chart behind Zach Ertz, the guy who caught the game-winning touchdown on February 4, 2018. That's a tough shadow to step out of!

Goedert received a lot of playing time in his first three seasons in the NFL, as the Eagles continuously utilized two-tight end sets more than anyone in the NFL. Nevertheless, Ertz was the player posting 100-catch seasons and solidifying his future place in the Eagles Hall of Fame. Things changed for Goedert in the 2021 season following Ertz's midseason trade to the Cardinals. Finally: Goedert was the Eagles' TE1 despite being viewed as a top-10 tight end in the league essentially since he entered the pro game.

"It's been really fun. We have a great group of guys coming in here every day," Goedert said after Saturday's training camp practice when asked about how this offseason has been as the Eagles' unquestioned TE1. "Me and Jalen [Hurts] have been having a really good connection throughout last year, throwing in the summers, throwing now. It's just great to be working with these guys, getting lots of reps... hopefully it pays off once the season comes."

The early returns from training camp look to be paying off. Hurts has been targeting Goedert and A.J. Brown heavily in practice this summer and almost no one else. In my Hurts play-by-play practice stories, I'm constantly writing "over the middle throw to Goedert for a gain of eight-ish yards" whenever I'm not talking about Hurts hitting Brown for a slant.

Goedert had one of his best plays of camp on Saturday too. Here's what I said of it in my #HurtsWatch article:

Play 9: Another big play for QB1. Hurts hits Goedert about 25 yards down the seam in stride. I wouldn't call it a "touchdown" but Goedert is a big run-after-the-catch tight end and I could've seen him breaking this one against a smaller safety in Marcus Epps for a huge gain in a real game setting.

Goedert discussed the play after practiced.

"It just was all vertical," Goedert said of his big catch. "Running back, a little option route in the middle... the safety went down with the back and I was able to keep it up the seam... Epps played over. He said he would've smacked me. I said it would've hurt him a lot more than it hurt me."

There has been so much talk about Goedert's "potential" during his young career. It's reasonable. He hasn't seen the number of targets other top-tier tight ends have over the past few years because of Ertz's presence. When he's gotten the ball and had room to be a YAC machine in the open field, however, he continuously gave off George Kittle vibes. All the physical traits and tools are there for him. While Ertz was the best route runner I've ever seen in midnight green, Goedert is a battering ram who works as a third offensive tackle in the run game while looking like a Gronkowski brother when he catches the ball in traffic.

I have confidence that Goedert is going to take a leap in 2022. His post-Ertz trade numbers last year were in line with the best tight ends in the league. After Ertz was dealt to Arizona following the Eagles' Week 6 loss to the Buccaneers, Goedert averaged 61.4 receiving yards per game and almost 15 yards per catch the rest of the season. That's not even including the 92 receiving yards he put up in the team's playoff loss in Tampa.

Here's a comparison between post-Ertz Goedert and the game's best tight ends in 2021:

He stacks up well!

Goedert doesn't need to be Ertz to be remembered as a great Eagle. He just needs to be Dallas (and to beat Dallas). The player Birds fans have seen when Goedert's seen an increased role is pretty damn good in his own right.