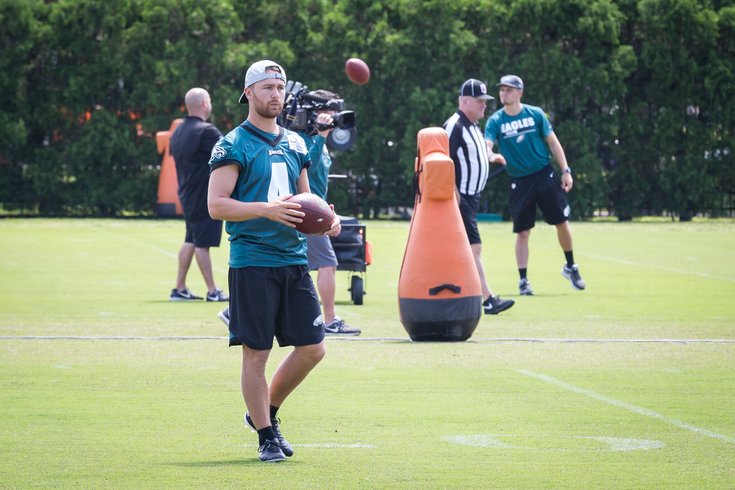 Kicker Jake Elliott during OTAs at the NovaCare Complex.

The Philadelphia Eagles are now into Week 2 of training camp, and they had a lighter "10-10-10" practice today, in shells and shorts. For those of you who are unfamiliar, Doug Pederson explained 10-10-10 practices today.

"A practice like today is more about when the defense is up, our starters, the offense has a set of plays that the defense wants to get accomplished and vice versa," he said. "When the offense is working, we want to set up defensive plays to work against our offense and vice versa. They're servicing each other."

We won't comment much on the plays today, as it's difficult to separate the competitive moments from the ones where the team is just out there servicing each other. So today, we'll just have more general notes.

• Carson Wentz didn't do much of anything today, and it was his fifth straight practice not competing in 11-on-11 drills. After practice, Pederson was peppered with questions about Wentz's rehab, whether or not he has had any setbacks, the reasoning for keeping him out of 11-on-11's for almost a week, etc. etc. etc. They were all valid questions, and Pederson had reasonable answers.

I'll share my official take on Wentz's absence, but first, a timeline:

We media types are a cynical bunch, as we should be. It's generally accepted that coaches and players lie to protect the better good of the team (or themselves) when necessary. As such, we tend to take everything they say with a grain of salt. That cynical mentality is also adopted by the fan base at times.

As a cynical reporter, when I view Wentz's situation within the context of the timeline above, my sense is that Pederson is merely telling the truth about Wentz. He looked great physically and mentally when he played, so what's the sense of continuing to put him on the field for 11-on-11 sessions that he doesn't need? It all passes the smell test for me, and the idea that Pederson feels comfortable shutting Wentz down for now because of the obviously impressive practices that everyone saw last week is a positive, not a negative.

• Chip Kelly has gotten some credit for the RPO concepts the Eagles used with Nick Foles throughout the playoffs. Foles had some success with those concepts in his oddly great year in 2013, so the Eagles were smart to implement them, and did so at a higher level.

The Eagles may also be seeing benefits from ol' Chip in hurry-up situations as well, which they worked on today. When Kelly coached the Eagles, everything was tempo, which was ineffective. However, going tempo can be a great tool for teams looking to catch opposing defenses off guard. When the Eagles do occasionally run tempo, it is perhaps a benefit to some of the guys who played under Chip for three years, who are used to playing at a fast pace. In practice today, the Eagles were getting up to the line quickly in those drills.

• The Eagles showed their "NASCAR" look on defense today, with Michael Bennett sliding inside to defensive tackle. The front four was Chris Long, Bennett, Fletcher Cox, and Derek Barnett. When Brandon Graham returns, another player who can shift inside as you all know, the Eagles are going to have all kinds of combinations that they can try along the front line on obvious passing downs.

• Bennett is one of the more interesting players on the team. Over the last few days, he's really come alive in practice, and has drawn praise both from Jim Schwartz and Pederson.

"He's going to be a great asset to this team," said Schwartz. "First of all – and I hadn't had a whole lot of exposure to him other than watching him wreck the offenses that I've been a part of – but because he wears those little tiny shoulder pads you don't realize how big he is. You guys go watch him, watch him stand next to Fletch. That's when it comes to me. It's like, wow, this is a big man."

"One, he brings an edge to that defense, and you saw yesterday with some of the aggression with him and Richard Rodgers," said Pederson. "I thought it was a great thing to see that aggression. But at the same time, he's sort of flamboyant. He’s outgoing. He's loose and he plays that way, and that's what you got to have. I talk about allowing these guys to let their personalities show, you’ve heard me say that before, and that's what you want. You want these guys to be able to have fun doing what they do."

• Last year, the Eagles repeatedly used Broncos star edge rusher Von Miller against himself, turning an outstanding player into a liability. One such play where the Eagles schemed Miller was on an option play in which Wentz flipped to Corey Clement for a touchdown.

The Eagles have worked on that play a fair amount this camp.

• Bryce Treggs probably had the play of the day, when he went up in the back of the end zone and snagged a high throw, keeping both feet in bounds. 10-10-10 practice or not, that was a nice catch.

• Jake Elliott was a significant presence in today's practice. To begin, he tried an onsides kick that he recovered himself. The trick on that play is to approach the ball as if you're blasting it deep, and then hit it with the inside of your foot so that it bounces at the same speed that you can sprint to track it down. Finally, you have to make sure you don't touch it within the first 10 yards. Elliott executed it perfectly, as he recovered the kick with a defender nowhere within five yards of him.

As for his field goal attempts, Elliott was 6/6, which brings him to 18/18 throughout camp so far.

Dave Fipp hasn't really stretched Elliott out so far this camp in terms of distance, as you can see above, but if there's a player who has proven he can hit the long ball, it's him. In fact, Elliott seemed to struggle more with shorter kicks, though that was probably just a weird oddity.

Elliott's 45-yarder today meant something to the team:

Jake Elliott just nailed a 45-yard FG at the end of practice that canceled meetings for tonight. Mass celebration. #Eagles

After practice, Pederson did lie to us, telling the media that the team won popsicles because Elliott made the kick.