Eagles unlikely to draft offensive line help at pick No. 8 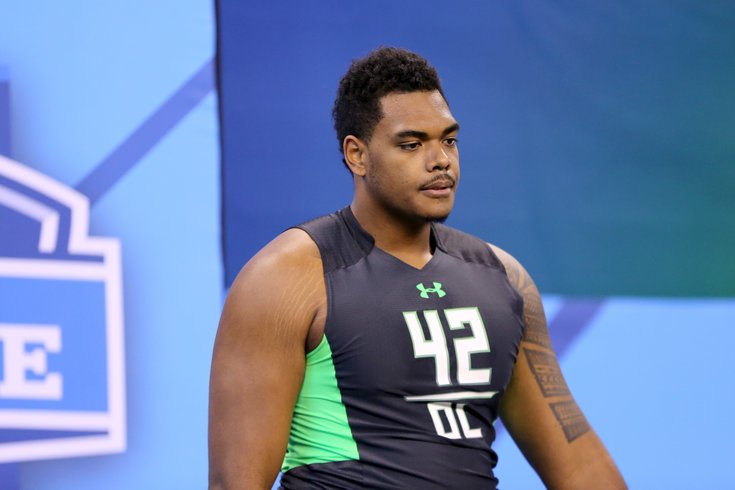 If the Eagles keep their pick at eighth overall, do not expect them to turn in a card that reads "Ronnie Stanley."

BOCA RATON, Fla. - When the Eagles traded up from 13th overall to eighth overall in the 2016 NFL Draft, it opened up a handful of new draft options, in that players previously thought to likely be unavailable at pick number 13 would be far more realistic at pick number eight.

One such player the media and fan base has identified in that regard is Notre Dame offensive tackle Ronnie Stanley.

In speaking with a variety of NFL people, one thing that NFL talent evaluators generally agree on is that the 2016 NFL Draft has exactly one elite offensive line prospect, Ole Miss offensive tackle Laremy Tunsil, who is not expected to make it anywhere near pick No. 8 and could very well be the No. 1 overall pick. After that, there is a small cluster of offensive tackles who are in the next tier. It appears that most evaluators believe that Stanley should be rated similarly to Michigan State's Jack Conklin and Ohio State's Taylor Decker.

Asked if the Eagles were likely to feel the same way, one remarked, "If they know what they're doing." He added that typically, there isn't a huge variance in opinion from team to team about the top players in the draft each year.

Logically, if Stanley, Conklin and Decker are all rated similarly, it shouldn't make a huge difference which of the three the Eagles wind up with, if they had interest. Since at least one of those three players are extremely likely to make it to pick 13, the Eagles' urgency to trade up from 13 to 8 to target Stanley wouldn't make much sense if he's rated similarly or just marginally better than Conklin or Decker.

Adding to the idea of the Eagles bypassing an offensive lineman at pick number eight is the notion that the Eagles can draft one later. Speaking at the NFL owners meetings in Boca Raton, Eagles quasi-GM Howie Roseman identified interior defensive line and the offensive line as the deepest positions in this draft.

"The offensive line group is pretty good," said Roseman. "The numbers that we have on our board are much greater than we’ve had the last couple of years."

In other words, the Eagles seem far more poised to bolster their offensive line on Day Two and Day Three of the draft, not Day One.