What do the Eagles have left to do in free agency? 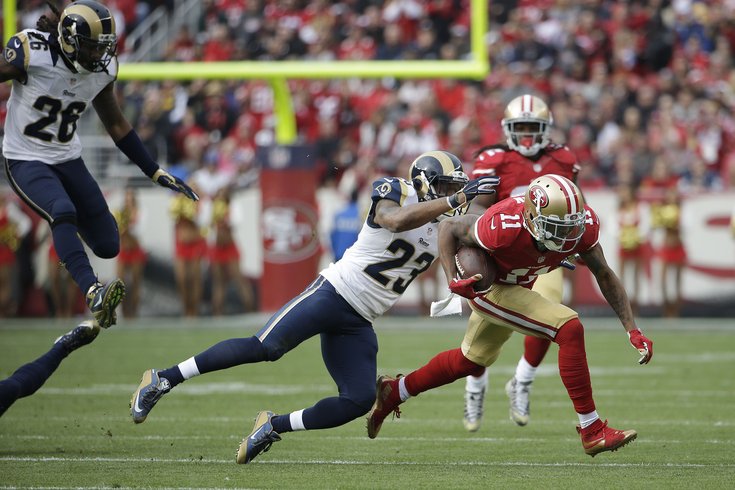 For the 37th straight year (estimated), the Eagles were shoppers for a safety in free agency.

Last Wednesday, the NFL's new league year began, and the Eagles were busy right out of the gate. Over the last nine days, they have signed seven new players in addition to one of their own. They also traded three players, and they lost two in free agency.

Let's recap each position and determine what the Eagles have left to accomplish.

• QB: After signing Sam Bradford before the start of free agency, pricey backup Chase Daniel during free agency, and camp body McLeod Bethel-Thompson, the Eagles are set here until the draft, when they are a great bet to draft a quarterback at some point.

• RB: DeMarco Murray is out. Bye. That leaves just Ryan Mathews, Darren Sproles and Kenjon Barner in the Eagles' backfield. The Eagles could opt to bring in a low-cost back to fill out their roster, but they are probably more likely to look to running back at some point in the draft.

• WR: The Eagles were able to add former Rams and Ravens wide receiver Chris Givens to the mix. That will give them a speed element to their offense. Still, the Eagles currently only go four deep at wideout, so expect them to add another vet, perhaps in the form of a special teams guy. They are also prime candidates to snag a WR in the draft.

• TE: The Eagles re-signed Zach Ertz and Brent Celek early in the offseason, and also have Trey Burton in reserve. This is a rare position where the Eagles have no needs.

• OL: The Eagles found themselves a starting RG in Brandon Brooks, but they still have work to do. They could still use another starting-quality player at LG, and they have to find a tackle to eventually replace Jason Peters on the edge. It is an absolute certainty that they'll add to their line in the draft, and they could look for bargain bin players for depth as free agency winds down.

• DL: This is the strength of the team, although it is a mild surprise that the Eagles have not yet added depth to their defensive line. The 2016 draft is widely regarded to be incredibly strong at defensive line, especially at defensive tackle, so perhaps the Eagles are just waiting to add youth. But certainly, depth remains a need here, as the Eagles lost Cedric Thornton to the Cowboys.

• LB: Kiko Alonso and DeMeco Ryans are out, Nigel Bradham is in. With their three starters in place, Eagles are probably done here in free agency.

• CB: Byron Maxwell is out, while former Bills corners Leodis McKelvin and Ron Brooks are in. The Eagles were also able to retain Nolan Carroll. The Birds now have quite the logjam of "OK" corners. They could add one in the draft, but in free agency there's no need to pile on further to the numbers they already have in place.

• S: The Eagles signed former Rams safety Rodney McLeod, who was clearly a priority free agent target. They should be done here in free agency.

In summary, I would expect the Eagles to add one more low-cost wide receiver, and perhaps look for bargains at OL, DL, and RB.