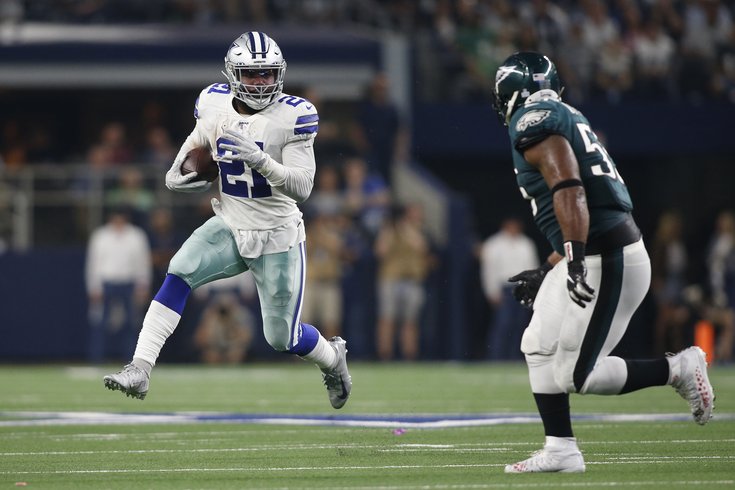 As we all expected, the NFC East will pretty much be decided Week 16 when the Philadelphia Eagles host the Dallas Cowboys, who have won the last four games in this matchup.

Normally, I would say that the Eagles are better served allocating their defensive resources toward aiding their often vulnerable secondary, however, with the Cowboys' offense, it really all starts with Elliott. When the Cowboys are able to get Elliott going, that is when they are at their most dangerous. It creates a trickle down effect, as we mentioned in our NFC Hierarchy this week:

In wins, usually against bad teams, Ezekiel Elliott is running for 5.01 yards per attempt. In losses, his yards per carry dip down to 3.75. In the Cowboys' last three wins over the Eagles (we'll omit their meaningless Week 17 win in 2017), the Eagles have struggled stopping Elliott:

For whatever reason, while the Eagles have struggled stopping Elliott, they have done a great job shutting down lead backs otherwise this season:

*While I would consider Carson to be Seattle's lead back, it should be noted that Rashaad Penny ran for 129 yards against the Eagles.

"He's a good, strong running back," said Jim Schwartz. "They have a good offensive line, they have good blocking tight ends. They got a quarterback that's mobile, that will run the ball also. They run some option-type stuff.

"So it's not just him, but there's a lot of other stuff. They got some big-play receivers. But he's a strong contact runner and we're going to have to put a lot of hats on him. It's not going to be one-on-one tackles. It's going to have to be gang-tackling, team defense in order to limit his yards and limit his effectiveness."

Here's what Elliott did to the Eagles the last time he played in Philly. His ability to run through contact, and always get an extra yard or two or three or more does so much in taking pressure off of Dak Prescott to pick up long third downs.

While the Eagles are third in the NFL in run defense, they have not been a good tackling team of late.

"This last game I don't think was our best tackling game, and we’re going to have to get it back pretty quick," Schwartz said. "It was a couple different things. I've said it a bunch of times, when you're pursuing well as a team, you don't notice missed tackles.

"We had Adrian Peterson jammed up on the frontside. Really did a good job on the front side of that. We folded too quick on the backside and, all of a sudden, he was bouncing out the backdoor. That's really not bad tackling, that's poor pursuit.

"I think that's there. Then there were some of those other plays he sort of pushed ahead on some of those third-down-and-short type things. Like I said, when you're pursuing well, tackling always looks good because one guy misses or one guy slips, or is holding the guy up, another guy can come clean it up and that's what it's going to have to be for this game."

The Eagles will have to do a much better job of swarming to Elliott (and Prescott, for that matter) in the run game than they have in their last three games against Dallas.

The other Cowboys' skill player who has absolutely destroyed the Eagles is Cooper. His three games with the Cowboys against Philly:

In fairness, Cooper was beating guys like De'Vante Bausby and an injured Sidney Jones in that 217-yard performance, as you'll see here:

Still, it's not as if the Eagles haven't had their issues covering alpha receivers this year, particularly Ronald Darby. In fact, the Eagles have given up 100+ yards to a receiver 10 times this season:

Look at those yards per catch numbers! That is ugly. #Analysis.

If there's one thing that may be in the Eagles' favor this week, however, it's that Cooper probably isn't 100 percent, and hasn't been for a while. In fact, Cooper has appeared on the Cowboys' injury report in all but one week this season:

As you can see, Cooper has dealt with foot, ankle, knee, and quad injuries this season. While he has been a full participant in practice the last two weeks — and he didn't appear on the injury at all Week 13 — it's pretty clear in watching Cooper that he hasn't looked like his formerly dominant self. Against the Lions Week 11, Cooper only played 56 percent of the snaps, while battling through his various ailments. Maybe that's the line of demarcation to use in separating his numbers:

Of course, Cooper isn't the only Cowboys receiver who can do damage to opposing secondaries. Second-year player Michael Gallup is closing in on a 1,000-yard season. He has 56 catches for 911 yards (16.3 YPC), and 3 TDs.

"He's a good player," Schwartz said. "He's a vertical player, can make plays down the field."

With Elliott likely to get extra attention, the Eagles' secondary is going to have to cover these guys without a lot of help, and they need to come up big.

Though often wildly overrated at times, the Cowboys' offensive line is obviously still very good, led by a pair of annual All-Pros in LT Tyron Smith and RG Zack Martin. However, they aren't without their flaws.

The weak link of the group is LG Xavier Su'a-Filo, who has filled in for former weak link Connor Williams, who is done for the season with a torn ACL. At center, Travis Frederick is headed to the Pro Bowl on reputation, but he has not had a good season after returning from a rare disease that kept him out for the entirety of the 2018.

Meanwhile, on the Eagles' side of the line, Fletcher Cox has not been the same elite player this season that we know him to be, as he doesn't seem to have ever gotten fully healthy from a toe injury. The Eagles are down to just three defensive tackles overall, which is bad news against a Cowboys offense that features Elliott, and is capable of stringing together long drives.

"We've gone in with three defensive tackles and we've seen how that affects our reps, so we'll just see where we are going forward with that," Schwartz said. "We always want to have rotation, try to keep guys fresh. Go back to last week against the Giants. Second half of that game, nobody needed any rest. We just kept getting three-and-outs. So your rotation sort of falls by the wayside because the offense is holding the ball a long time.

"Even this last game when our offense was driving, we had multiple, seemed like, 12, 13, 14 play drives and that certainly helps when you have guys playing more snaps. It takes away the need to have to rotate and even rotate within series."

If the Cowboys can stay on the field offensively and are able to wear down the Eagles' interior defenders, they can help minimize the chances of one of their rare weak links on offense getting exposed.

4) Halapoulivaati Vaitai (or a hobbled Lane Johnson) vs. DeMarcus Lawrence

After Lane Johnson went down with a high ankle injury against the Giants, Doug Pederson classified him as "week-to-week," which, in Pederson's vernacular means that Johnson will be lucky if he doesn't have to have his leg amputated. I kid, I kid.

Johnson's availability will be in doubt leading up to this matchup, and his availability in practice this week will be worth monitoring. If he can go, he surely won't be 100 percent. And if he can't, Vaitai will have to fill in again.

Obviously, DeMarcus Lawrence will be a difficult matchup, whether he's facing a backup, or an injured Johnson. We don't need to say much more than that here, right? Cool, moving on...

5) Carson Wentz and the Eagles' ball control offense vs. the Cowboys' defense

Offensively, the Eagles have strung together a large number of 10-play scoring drives this season, mostly because they're incapable of making big plays down the field. They have 21 of them this season, and 8 in the last 3 games:

In this matchup, those long, slow, plodding, cinderblock shoe, boring-ass drives might actually be a feature, not a bug. Ultimately, Carson Wentz is going to have to put the team on his back again to win this game. He's going to have to convert a lot of third downs, and make the most of any trips into the red zone. Can he string together enough of these long scoring drives to help out the Eagles' over-matched defense?

Oh, and no more fumbles.