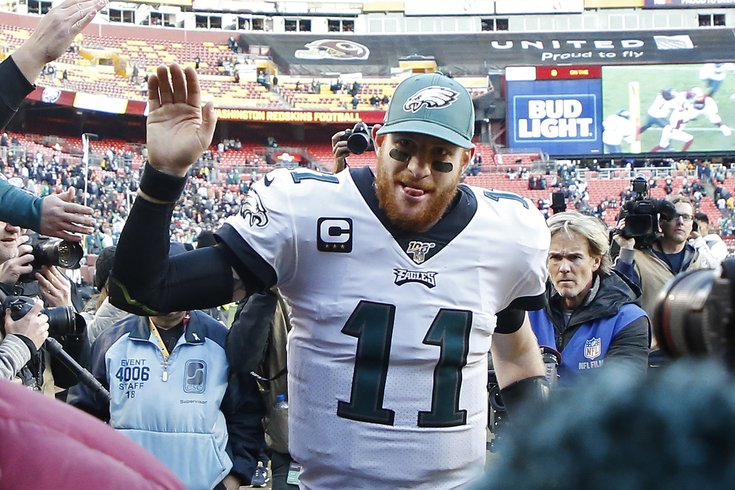 Your receivers drop a few game-winning TDs, and you're trash. Come back against a couple of cellar-dwelling teams in the fourth quarter, and everyone loves you.

Here's where people around the country have the Birds ranked after the 15th week of the 2019 regular season:

The Eagles entered the year with the third-oldest roster in the NFL, which included eight original starters who were at least 30 years old. That's come back to bite them in the areas of health and team speed. Philadelphia is projected to have 10 draft picks this April, and they will be looking to craft a younger, more explosive team for 2020.

#JimmySays: If only we could have seen this coming!

Carson Wentz is an imperfect quarterback at this stage of his career, but damn if the man is not impressive when the chips are down. For the second consecutive week, Wentz led the Eagles on a late game-winning touchdown drive, this time victimizing the Redskins in a 37-27 win at FedExField. Playing with a group of wide receivers who would be held in check by defensive backs in the XFL, Wentz made it work, connecting with Greg Ward Jr. on the go-ahead touchdown with 26 seconds to play. The first of Wentz's three touchdown passes -- a 15-yard dart to Miles Sanders in the third quarter -- might have been the most impressive throw any QB has made this season. At 7-7, the Eagles have it all in front of them now: If they beat the Cowboys at home next Sunday and beat the Giants at the Meadowlands in Week 17, they are NFC East champions.

#JimmySays: I'd like to see someone put out a top 10 list of best throws this season, league-wide. I'd be curious where I'd rank Wentz's throw to Sanders.

Miles Sanders’ 172-yard game is probably a sign of things to come. But as a whole, the Eagles still look awful. Not that the Cowboys are great, but Philadelphia doesn’t look like they can win that NFC East title showdown on Sunday.

#JimmySays: Seriously? Of course the Eagles can win that game! They're playing at home, they have an immensely talented quarterback, and at times (let me be clear to stress... at times), the pass rush can look very good. I mean, I'm not going to pick them, but to say they can't win that game is a little silly. It's a 2.5-point spread!

They found a way at Washington, but it was an ugly win. They can't play that way against Dallas this week.

If you're assuming hosting Dallas at Linc will boost Iggles’ chances to take over NFC East, think again. Dallas has won six of seven in Philly.

#JimmySays: I mean, the Cowboys have also won three of the last four games played in Dallas. Obviously, having home filed advantage does indeed boost the Eagles' chances of winning this game. So, no, don't "think again."

The Eagles somehow found a way to score the required points late to beat the Giants and the Redskins in the same week. To their credit, they are grinding and squeaking things out with a slow offense and an overmatched defense.

#JimmySays: I don't think Doug Pederson gets enough credit for the job he has done this season with this roster.

It seems like the Eagles barely can field a team at this point. But they’re finding ways to win lately entering Sunday’s NFC East “showdown” (such as it is) with the Cowboys in Philadelphia. Maybe Carson Wentz is finding his footing as a leader after two seasons of watching the Eagles play their best football and get their biggest wins with Nick Foles, not him, at QB.

#JimmySays: The Washington Post has found a way to shoehorn Nick Foles into their Eagles blurb in 3 of their last 6 power rankings posts.