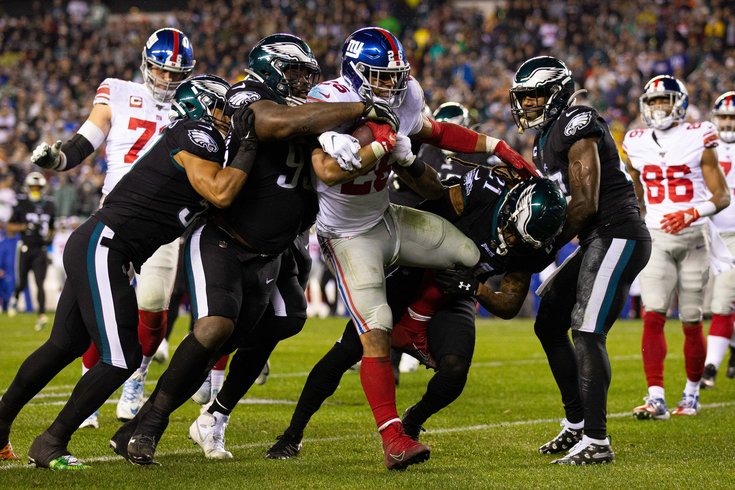 The Eagles did a good job on Saquon Barkley Week 14, but he'll be a bigger challenge this Sunday.

The Philadelphia Eagles have owned the New York Giants in recent years, as they have won six straight games, and 10 out of the last 11. Yet, the Giants are inching closer to beating the Eagles, as the Birds needed a comeback win Week 14 to keep their season alive, and five of the six games during their winning streak have been decided by fewer than one score.

The Eagles are playing with the pressure of trying to lock down a division title, while the Giants can come out loose with nothing to play for, having been realistically done for about two months.

When the Eagles faced the Giants three weeks ago, Barkley was smack dab in the middle of a disappointing season, as he had a yards per carry average of 2.9 in his previous 7 games, which were affected by an ankle injury.

However, in the last two games, Barkley has put up huge numbers:

In those two games combined, he also had eight catches for 121 yards, and a TD. Add it all up, and Barkley has had 422 yards from scrimmage in the last two games.

Beyond the numbers, as you might expect, Barkley very much looked like the rookie version of himself. He are his highlights last week against Washington:

His run at the 0:25 mark is extraordinary. He hesitates with a little stutter step then explodes through the hole, breaks poor No. 35's soul in the open field, and finishes the long run with a score. Nasty.

Even with a down season this year, Barkley was the focus of Jim Schwartz's defense Week 14, and the Eagles were able to shut him down. In that game, Barkley had 66 yards on 17 carries, and one yard on three receptions. Spoiler alert: Barkley will be Schwartz's focus again Week 17.

"I thought last time we played him, we treated him like he was 100% and I thought he was," Schwartz told reporters on Tuesday. "He is a guy that if you give him an inch, he can go the distance. I think you saw that, he caught a wide receiver screen, did a seam route out of the back field, made some of those big plays. He has that ability. I think he has had that ability all season long.

This time around Barkley will be a tougher challenge.

2) The Eagles' pass rush vs. the Giants' offensive line

As always, the Eagles must exploit the Giants' shaky offensive line. The Giants are solid at both guard spots, with Will Hernandez at LG and Kevin Zeitler at RG, but they've had trouble protecting the edges with the massively overpaid Nate Solder and journeyman RT Mike Remmers. To note, Remmers is still in the concussion protocol. If he is unable to go, it is likely that second-year pro Nick Gates would fill in. Either way, the Eagles could really use a big game from Brandon Graham.

During their three-game winning streak, the Eagles only have five sacks, including a Week 15 performance in Washington in which they didn't get to oft-sacked Dwayne Haskins until the final play of the game.

The Eagles must find a way to get home, mostly because of our next matchup...

3) Daniel Jones vs. his distaste for possessing the football

Despite only becoming the starter Week 3 and missing two games late in the season, Daniel Jones is tied for second in the NFL with 21 total turnovers (11 INTs, 10 fumbles lost on 15 total fumbles). A look at his turnovers, game-by-game:

As you can see, Jones has at least one turnover in every game he has played this season, with the lone exception of last week against Washington. He even had three fumbles in the preseason, two of which he lost.

Here's a rather egregious example of Jones' carelessness with the football from Week 10 against the Jets:

Still, Jones is unquestionably better than Eli Manning, who the Eagles were fortunate to face Week 14. Despite his turnover struggles, Jones has had some really impressive games, at least statistically.

"Like a lot of rookie players he has his ups and downs, but he's playing his best late in the season," Schwartz said. "I don't know if it had anything to do with sort of -- a lot of times rookies can get in there and take a step back. He took a step back for a couple weeks, watched; sometimes that benefits guys.

"But he has good mobility. He runs a little bit more zone reads and option stuff than obviously Eli Manning, and also can scramble, so we have to take care of that. And I think he's making an effort to get the ball out of his hand a little bit quicker. I think you saw that against Washington last week.

"He certainly gets your attention. He threw for a bunch of yards. He scored a lot of points. He had a lot of touchdown passes last week. So, we’re going to have to play our best on Sunday."

When the Eagles' pass rush gets near Jones, they must be aware that he is vulnerable to fumbles, and they should be trying to get hands on the football.

Side note: Just to make sure we hit on all the important points, we should also quickly note that rookie WR Darius Slayton is good, and the Eagles should cover him. Alright, moving on...

4) The Eagles' practice squad receivers vs. the Giants' secondary

Hey, did you guys/gals know that DeSean Jackson, Alshon Jeffery, and Nelson Agholor have been out for a while, and a bunch of practice squad guys and rookies have filled in for them? It's true!

Typically in these matchup posts, the Eagles' wide receivers are the disadvantaged side. However, against these Giants cornerbacks, I'm not so sure.

At corner, after veteran Janoris Jenkins made offensive comments (and was subsequently unapologetic for them), the Giants swiftly waived him.

At safety, the Giants lost Jabrill Peppers for the season with a back injury.

With Jenkins and Peppers gone, the Giants were left with 87-year old Antoine Bethea and an otherwise extremely inexperienced secondary. Here's who the Giants have on their back end, sorted by Week 16 snap totals:

Technically, Beal is a second-year player, but he's essentially a rookie. He was selected in the 2018 supplemental draft, went on IR after one training camp practice with a shoulder injury, and missed that entire season. In 2019, he missed the first nine games of the season after starting the year on IR. He only has six games of experience (three starts), and thus is arguably behind the other rookies on the roster.

If you consider Beal something of a rookie as I do, then four of the Giants top five playing time leaders in their secondary are rookies. And none them, especially the corners, have been particularly impressive. It shows up in the defensive passing stats:

Carson Wentz got his receivers involved early against Dallas last Sunday, as Greg Ward has become a reliable target, while J.J. Arcega-Whiteside is showing a little life. This is a secondary that Carson Wentz can beat with the wide receiver hand he has been dealt.

5) The Eagles' rushing attack against the Giants' stingy run defense

While the Giants' secondary is abominable, they at least do a decent job stuffing the run. On the season, they have allowed 3.9 yards per carry, which is good for fifth in the NFL.

Up front, the Giants have a lot of size:

Despite being behind for most of the game Week 14, Doug Pederson never stopped trying to run the ball, as the Eagles had 32 rushing attempts on the night. They had the most success running to the outside, away from the Giants' beef.

It looks like it'll be a rainy day on Sunday in East Rutherford, so Jeff Stoutland is going to have to cook up some run concepts to take some pressure off of Wentz.