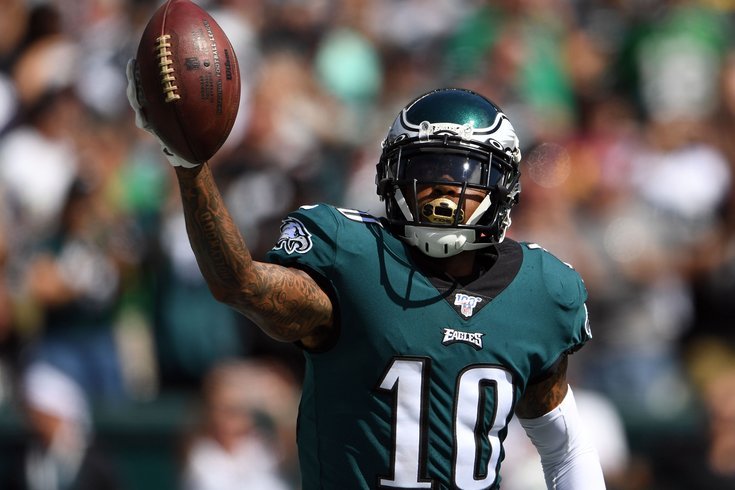 Philadelphia Eagles wide receiver DeSean Jackson would be eligible to return to the field if the Eagles reach the divisional round of the NFC playoffs. Jackson shared a video of an encouraging workout as he continues to rehab from surgery.

The Philadelphia Eagles can punch a ticket to the NFC's Wildcard round with a road victory over the New York Giants this weekend, a game no one should take for granted after an overtime nailbiter a few weeks ago.

If the Eagles win Sunday, they'll have handled four straight games against divisional opponents and will host a home playoff game against either the Seattle Seahawks or San Francisco 49ers.

Both of those teams have shown signs of vulnerability during the stretch run, with key injuries and losses to Arizona and Atlanta along the way. Regardless, the Eagles would be guaranteed to greet a team fresh off a loss that cost them the division and a potential first-round bye.

All of this is meant to suggest that there's a legitimate chance Philadelphia could end up seeing DeSean Jackson back on the field if the team reaches the divisional round of the playoffs. That's the first game he would be eligible for return after spending eight games on IR following surgery.

Jackson has indicated in recent weeks that he is working hard to be available in the event the Eagles were to (1) make the playoffs and (2) win a playoff game.

On Christmas, Jackson gave fans the clearest sign that he's beginning to round back into game form. In a holiday Instagram post, Jackson showed off his stride at the Eagles practice facility.

Considering that Eagles fans spent the whole offseason drooling over Jackson's dominant training camp, this video is the best thing to surface since his two-touchdown performance against Washington on opening day.

The Eagles have several hurdles to clear before Jackson's status becomes relevant, but for a hungry team that may claw its way into the postseason, the prospect of getting back their deep threat in January is just another motivator to redeem a season that looked lost a month ago in Miami.