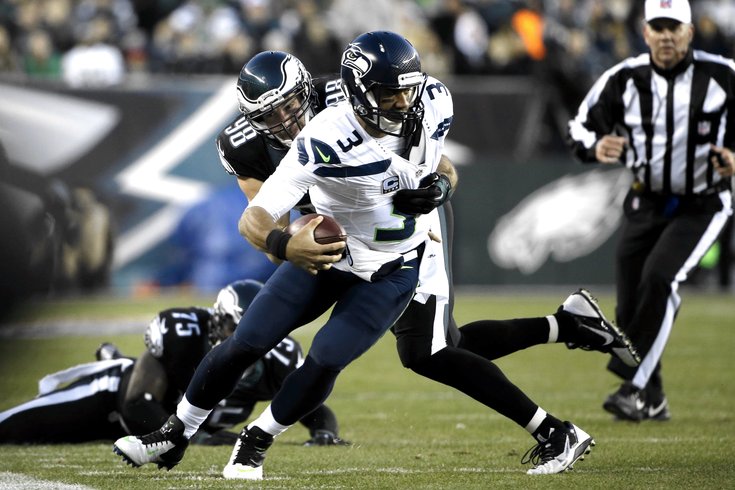 Seattle Seahawks' Russell Wilson is tackled by Connor Barwin when these two teams last met in December of 2014.

The Eagles will have their work cut out for them on Sunday as they make the cross-country trip to face Russell Wilson and the Seattle Seahawks in a game that could have huge NFC playoff implications.

Yes, we've officially reached that time of year when we can start talking about the postseason -- and with the Eagles sitting at 5-4, just a half-game behind Washington for the second NFC wild-card spot, they should certainly be included in that conversation.

The Seahawks are two games up in their division and don't look like a team with whom the Birds will battle for a playoff spot down the stretch. But getting back to .500 against conference opponents could go a long way toward securing one.

None of that will matter, however, if the Eagles don't finish strong. Especially since Doug Pederson's team is still in last place in the NFC East. Here's a look at the current NFC playoff picture.

Depending on how you want to look at it, there's good news here for the Birds. After Sunday, they'll have played all seven of the other teams listed above -- however, they'll still have to face Dallas, New York and Washington again. Their other three remaining opponents are Green Bay, Cincinnati and Baltimore, who are a combined 12-14-1, but also have the ability play better than their record indicates.

It's not going to be easy. But pulling off the upset in Seattle would be a good start.

When you look at the two most lopsided matchups in this game, my belief is that they heavily favor the Eagles.

The Eagles' biggest strength on the team is their defensive line, which lines up perfectly with the Seahawks' biggest team weakness, their offensive line. If the Eagles can get after Russell Wilson consistently with four rushers, they have an outstanding chance of shutting down the Seahawks' offense, like they've done to several other teams so far this season.

In other words, I like how the Eagles match up here. Still, ultimately, the Seahawks' defense will prove to be too much for the Eagles' offense. 17-16 Hawks.

What Jimmy said made me both laugh and think a little bit:

What good is the Legion of Boom if you have receivers that can’t get open (or catch the ball on the rare occasion they do) against even the worst NFL secondaries? That said, I don’t expect Carson Wentz and co. to be able to move the ball much at all against this defense. Seattle is just too good, too fast, too able to get away with obvious penalties.

My worry for the Eagles is primarily limiting big plays. Russell Wilson looked terrific in New England last week, but the Eagles front four is much, much better than what the Patriots are running out there. I expect them to win the line of scrimmage against a subpar Seattle offensive line and pressure Wilson the entire game.

Wilson is very good, and his playmakers are better than he’s ever had. And I think on a couple of occasions, he’ll be able to make something happen with his feet and then hit on a big play downfield against the Eagles secondary. And that, for me, will be enough to give Seattle a win.

(The Eagles still cover, and that is what’s really important here.)

Like the Eagles, the Seahawks are 4-0 at home. Unfortunately, Sunday's matchup against Seattle is a road game for the Birds, and they're just 1-4 in those game this season, with their only win coming in Week 2 against the Bears.

Like the Eagles, the Seahawks live or die by their defense. Unfortunately, the Eagles are going to need to score some points in order to avoid falling back to .500 on the season.

And like the Eagles, the Seahawks offensive line isn't operating at 100 percent. Unfortunately, Seattle has Russell Wilson, the more mobile of the two quarterbacks, and the most dangerous receiver on the field Sunday -- tight end Jimmy Graham.

Still, Pete Carroll's team has not looked the same this year as it has previously, perhaps due to the loss of Marshawn Lynch. Then again ,we were saying similar things this time last season -- they were 4-5 through the first 10 weeks of 2015 -- until the Seahawks won six of their last seven games to finish 10- 6 before losing to the Panthers in the second round of the playoffs.

Will a similar streak start on Sunday? Perhaps. But it won't be easy for the home team.

[NOTE: If you put any stock in my predictions, which have been wrong in a spectacularly consistent manner, I apologize.]