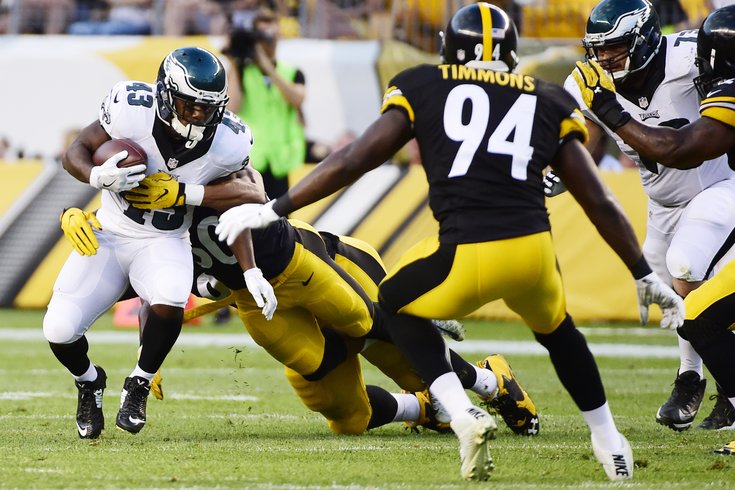 Philadelphia Eagles running back Darren Sproles in action against the Steelers when the two teams met earlier this year during the preseason.

This is supposed to be the one that tells us whether or not the Eagles are for real. Those last two were just preseason games five and six, right? At least that's what it feels like.

But a win against the 2-0 Steelers on Sunday would put to rest many of the doubts held by those still willing to fully buy-in on the Birds. Unfortunately, it's not going to be easy for the home team. They'll have to deal with Ben Roethlisberger, Antonio Brown, and DeAngelo Williams.

And that's just the start.

Here's a look at how our staff sees things playing out when the two undefeated teams meet in South Philly, where the Steelers haven't won since 1965.

So far in 2016, the Steelers have picked up where they left off, scoring an average of 31 points per game to start the season. This may be the best challenge the Eagles defense will face all year.

Defensively, the Steelers are less impressive, as it is a very young, inexperienced group. In fact, the Steelers have the third-youngest starting defensive front seven in the NFL, as of July 12. Much like the Eagles' first two opponents, the Steelers don't have much in the way of starting pass rushers with impressive career sack numbers. (Note - James Harrison is still on the team, but does not start and is nowhere near the player he once was). The Steelers' personnel defensively is better than the Bears' and Browns', but this isn't the high-quality Steelers defense you once knew.

If the Eagles can hit Ben Roethlisberger early and often, they can win this game. If the Eagles' defensive front can't dominate, the Steelers' offense has too many weapons, and an absolute star in Antonio Brown, who should give the Eagles' depleted corners all they can handle and then some. Steelers, 27-23.

Those famous words, uttered by Rosie Perez in “White Men Can’t Jump,” are applicable to Sunday’s Eagles-Steelers game. For the Birds, this is a gravy game. It’s safe to say that nobody believes in them. The Eagles have the second-best point differential in the league and are somehow giving 3.5 points at home.

If the Eagles are simply competitive in a well-played game with a Pittsburgh team widely viewed as a Super Bowl contender, people will begin to take notice. I think they will do just that.

It won’t be easy, of course. Last week, I was worried about the secondary. Alshon Jeffrey did have some success in the first half, but the entire defense stepped up and held the Bears to just seven points. That group is playing at a high level, and this man will be their biggest test of the season:

Carson Wentz can move the ball against the Steelers defense. Doug Pederson looks more than capable as a rookie head coach. I think we’ll continue to see positive signs from the Eagles on Sunday, but Big Ben and Antonio Brown just get the better of them in a toss-up game.

Are the Eagles capable of beating the Steelers? I think so, and certainly playing in Philly helps. However, I don't think Carson Wentz is going to improve to 3-0 on Sunday. And I don't think it's going to entirely be his fault. The Birds secondary has given up more X plays than it should've through the first two weeks, especially against the Browns. And limiting those type of big plays isn't going to get any easier Big Ben and Antonio Brown, at least not for the secondary, who will be without CB Leodis McKelvin for the second week in a row.

That being said, the Eagles front seven should be able to help in that area. Sure, they're facing DeAngelo Williams, who leads the NFL with 237 yards through the first two games, but don't let those numbers fool you. In fact, I would expect a letdown from him this week. Prior to Weeks 1-2 of this season, Williams has never had back-to-back 25-carry games. Never. Not once, not in any of his previous 10 seasons. Furthermore, when he's carried the ball at least 20 times in a game, there's historically been a big drop-off in his production the following week. That holds true this season, despite the fact that ran for 94 yards last week. In Week 1, Williams averaged just 2.9 yards per carry, down from 5.5 the week before. In a similar role last season -- filling in for LeVeon Bell early on -- Williams carried the ball 21 times for 127 yards (6.05 YPC) in Week 1, but that number dropped to 77 yards on 20 carries (3.9 YPC) in Week 2. Unfortunately, we didn't get too se if he bounced back in Week 3, because by then, Bell was back in the lineup.

If he struggles, that should allow the front seven to key on Roethlisberger and try to force him into shorter throws. Then again, that's easier said than done. As for the Eagles offense, I expect them to perform at about the same level as they have to this point in the season. The difference between this game and their first two won't be the Eagles, but rather the level of their competition. But as Rich pointed, Rosie Perez might have been on to something.