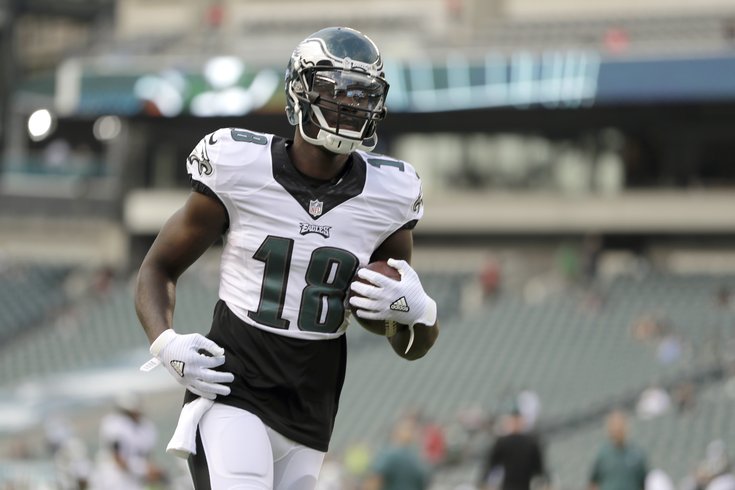 When the Eagles traded for WR Dorial Green-Beckham, the intent was to let him learn the offense slowly, before being implemented fully into the offense. After being with the team for about five weeks, Green-Beckham is likely going to see more targets come his way, according to Doug Pederson.

"He's coming along really well," said Pederson. "We're giving him a little bit more each week. He's understanding things a little bit better and processing the information better. Again, this is something as we go forward we'd love to obviously get him a little more involved from a standpoint of getting more targets thrown in his direction."

Through the first two games, Green-Beckham has had just six passes thrown his way, four of which have been completed for 32 yards. However, according to Pederson, Green-Beckham was the primary target on several plays Week 2 against the Chicago Bears, but the defense dictated that the play go elsewhere.

"We actually had DGB targeted a couple of times from a play call standpoint in the red zone, it's just that the play design went to the other side of the field; I think Carson went the other way," Pederson explained. "We just continue to keep working with him. We've increased his workload the last week and we want to continue to do that and move him around the more comfortable he gets with our system."

One of the concerns on Green-Beckham coming out of college, as noted in his draft profile on NFL.com, was, "Suspect work ethic." However, Green-Beckham believes that he has mastered a sizable chunk of the playbook.

"Right now, I'd say I'm around 80 percent," said Green-Beckham. "75 to 80 percent of the playbook, which is a lot. Every week I try to prepare myself and come in and look more into the playbook, try to figure out more concepts. So when it's time to put those plays in, I'm already ahead of everybody and I already know what I need to do. So when it comes time to ask questions, I'm asking the right questions on those particular plays."

As he will most weeks, the 6'5 Green-Beckham will have a sizable height advantage this Sunday over Steelers corners William Gay (5'10) and Ross Cockrell (6'0).