This time last season, the Eagles appeared as though they may have found their long-term answer at quarterback in Nick Foles. Foles’ surprise breakout 27 TD, 2 INT season enabled the team to attack other weak areas of their roster in free agency as well as the draft. This upcoming offseason, the Eagles could be in the market for a new quarterback, as Foles struggled through a poor 2014 season both in terms of production and health. Mark Sanchez wasn't any better in relief of Foles, and he will be a free agent this offseason.

The obvious college quarterback of interest to many Eagles fans in the 2015 draft is Oregon’s Marcus Mariota, Chip Kelly’s old protégé. We should note the disclaimer that opinions on quarterbacks change quite a bit during the pre-draft process. Quarterbacks like the Jets' Geno Smith and the Vikings' Teddy Bridgewater, for example, are often thought at times to be potential #1 overall picks, only to fall to the end of the first round, or out of the first round completely. But unfortunately for Eagles fans, if Mariota is indeed regarded by NFL talent evaluators as an elite QB prospect after he has been thoroughly scrutinized, the Birds will have almost no chance of landing him. The reason why is simple – There are a wealth of teams drafting ahead of them this year that need quarterbacks, and will have far better ammunition to move up and get one if that’s what they feel they need to do.

By my estimation, an argument can be made that at least nine teams drafting ahead of the Eagles could have interest in the right quarterback for their franchise, including the two teams drafting first and second overall. Let’s look at those nine teams:

#1 overall pick: Buccaneers (Current QBs: Mike Glennon, Josh McCown) – One of the under-appreciated rookie performances in the 2013 season was by Glennon, who threw for 19 TDs and 9 INTs on a bad Tampa team.

Exit head coach Greg Schiano, enter new head coach Lovie Smith. On the second day of free agency in 2014, Smith brought in McCown, his former backup with the Bears, and immediately named him the starter, without giving Glennon a chance to compete for the job. That's a strong indication the Bucs' new brass simply didn't believe in Glennon then, so why should they believe in him now?

The Buccaneers are a clear candidate to draft a QB if one is worthy of the #1 overall pick.

#2 overall pick: Titans (Current QBs: Zach Mettenberger, Jake Locker (FA), other junk) - Locker was benched in favor of Mettenberger, a sixth round pick in 2014, and will be a free agent after this season. His career in Tennessee is likely over. Mettenberger showed some promise, but went 0-7 as a starter, albeit on a horrendous team. The Titans are also clear candidates to target a QB.

#5 overall pick: Redskins (Robert Griffin III, Kirk Cousins, Colt McCoy) – First year head coach Jay Gruden had himself a season. Robert Griffin III got hurt Week 2 against the Jaguars, a familiar scene, at which point Kirk Cousins took over as the starter. Cousins then went on to lose his next four starts, before being benched for Colt McCoy during his fifth start against the Titans. McCoy then started one game against the Cowboys, a win, before being benched in favor of RG3, who was returning from his injury. RG3 went on to lose his next three starts before being benched in favor of McCoy. McCoy then started the next three games before aggravating a neck injury, giving way once again to RG3, who finished out the season.

In other words, as usual, the Redskins are a dumpster fire.

If the Redskins are done with RG3, they could opt to trade him. But regardless of RG3's future with the team, it shouldn't come as an enormous surprise if the Skins drafted a QB they like should the right one fall to them at the fifth pick.

#6 overall pick: Jets (Geno Smith, Michael Vick) – This one is easy. Geno Smith is bad, and Michael Vick is done in this league as a starter. The Jets will have a new head coach and are clearly a candidate to target a quarterback.

#7 overall pick: Bears (Jay Cutler, Jimmy Clausen) - Cutler has a big arm and under-appreciated mobility, but his talent has never led to success in the NFL. The Bears are loaded with talented skill position players like Matt Forte, Brandon Marshall, Alshon Jeffery, and Martellus Bennett. And yet, the Bears missed the playoffs for the fourth straight year, in spectacular "toxic locker room" fashion.

In fact, since Cutler entered the league in 2006, he’s been to the playoffs once, and his lone playoff win came against a 7-9 Seahawks team that won a historically bad division.

Unfortunately for the Bears, in January of 2013 they signed Cutler to a $126.7 million deal, $38 million of which was guaranteed. It will cost more to cut him than keep him until after the 2015 season. The Bears could potentially trade Cutler, which would drastically reduce the financial hit they’d take, but I’m not sure what team out there would be willing to take on a bad contract for a turnover machine who seems to have reached his ceiling.

#9 overall pick: Giants (Eli Manning, Ryan Nassib) - Eli Manning is a two-time Super Bowl winner, and as every Super Bowl winner should, Eli basked in the spoils of being a winner. He went on Saturday Night Live, and bathed in SpaghettiO's: 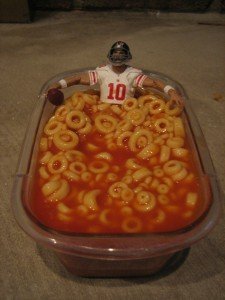 The Giants have an interesting decision ahead of them in regard to Eli's contract, noted below via overthecap.com:

Eli will count for just under $20 million against the cap next season. If the Giants want to try to sign him to a contract extension, it won't be cheap.

So what do the Giants do? Can they commit long term guaranteed dollars to an average 34 year old quarterback on a team whose roster isn't close to Super Bowl contention? Or do they begin to shop for Eli's successor? If it's me I'm opting for the latter, unless of course the Giants think Ryan Nassib is the next Joe Montana.

#10 overall pick: Rams (Sam Bradford, Austin Davis, Shaun Hill) - The Rams are a terrific case study in whether or not to draft a QB even if you think you may be set at that position. In 2012, the Rams only had to move back four measly spots, from the second overall pick to the sixth, to gain a tremendous bounty of picks when the Redskins traded up to draft Robert Griffin III. For that 2nd overall pick, here is what the Redskins gave up:

The Rams hitched their wagon to a quarterback in Sam Bradford, who at that time was still very promising, but not a sure thing by any stretch. While the Rams have otherwise built a decent roster, they suffered through another losing season with Austin Davis at QB after Bradford was lost with an ACL tear, his second in as many years. In the last four seasons, Bradford will have missed almost half his team’s games.

Bradford has a cap number of $16,580,000 next season, which is the final year of his rookie contract. If the Rams cut him, they’ll salvage almost $13 million of that cap space. Will they want to allocate that kind of money to a fragile quarterback with a career 18-30-1 record who must show that he can recover fully from a two torn ACLs? Bradford will almost certainly be asked to take a pay cut. Whether he does or not, the Rams cannot continue to believe in him as any type of long term answer, and are sure to be in the hunt for a QB.

#13 overall pick: Saints (Drew Brees) - Brees turns 36 in a week. He can still play, but at what point do the Saints begin to think about life post-Brees?

#16 overall pick: Texans (Ryan Fitzpatrick, Tom Savage Ryan Mallett) – Statistically, Fitzpatrick has actually had a really nice year for Houston, finishing ninth in the NFL in QB rating. Still, Fitzpatrick can hardly be considered a long-term option at QB. The Texans drafted Tom Savage out of Pittsburgh last year, and they traded a late round pick for Ryan Mallett, but if a QB fell into their laps, they remain a candidate to pull the trigger on a QB in the first round.

#20 overall pick: Eagles (Nick Foles, Mark Sanchez (FA), Matt Barkley) - And here are the Eagles, waaaaaay down here at 20th overall, the final overall pick among teams who did not make the playoffs.

If you're the Bucs and you think Mariota is an elite QB prospect, maybe you just take him? Is that too simple?

Or if you're the Titans, you think Mariota is an elite QB prospect, and the Bucs draft someone else, maybe you just take him?

And if for some reason Mariota is viewed by NFL personnel people as an elite QB prospect but the Bucs and Titans both pass on him for some reason, do you really want to trade all the way back to 20 if you're the Jaguars (3rd overall pick) or Raiders (4th overall pick)? Or would you rather trade back, to, say... 6th or 7th overall, and still get an awesome prospect in addition to a boatload of extra picks? If it's the former, the Eagles would have to give up an absolutely insane package of future picks and perhaps some of their best players to beat the offers of the aforementioned teams ahead of them. And they're not that dumb. Probably.

It's not out of the realm of possibility for the Eagles to land Mariota, but the only way that will happen is if the rest of the NFL doesn't view him as an elite prospect worth selecting in the top five to ten picks of the draft.