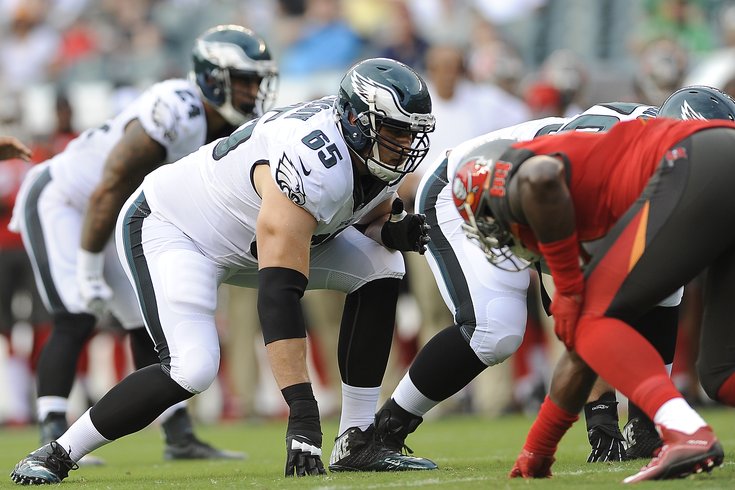 The likely upcoming loss of Lane Johnson will have a ripple effect in which the Eagles will lose almost all OL continuity.

With the Philadelphia Eagles likely to lose Lane Johnson for the first 10 games of the season, they won't just lose a good player. They'll lose almost all continuity along their offensive line.

To account for Johnson's loss, the Eagles are kicking LG Allen Barbre out to RT and seemingly filling in either rookie Isaac Seumalo or free agent Stefen Wisniewski at LG. Under the new alignment, no Eagles offensive lineman will have any real game experience playing next the teammate immediately to their left or right. Here's what we mean:

• Number of snaps LT Jason Peters has played next to LG Isaac Seumalo or Stefen Wisniewski: 0

• Number of snaps LG Isaac Seumalo or Stefen Wisniewski has played next to C Jason Kelce: 0

• Number of snaps C Jason Kelce has played next to RG Brandon Brooks: 0

• Number of snaps RG Brandon Brooks has played next to RT Allen Barbre: 0

Head coach Doug Pederson downplayed the continuity concern, noting that the Eagles have a lot of experience along their offensive line.

If they've come together as Pederson stated, they've done so without much in the way of practice time together even in training camp.

• Peters was given a whole lot of rest during training camp, as well as the preseason games so far. He did not play at all in the first preseason game against the Buccaneers.

• Seumalo spent almost the entirety of training camp running with the second team offense. He has practiced with the first team offense for less than two weeks.

• Brooks missed the first seven practices of training camp, and was eased back in slowly. He played just three snaps against the Buccaneers.

• Barbre has not missed any time during camp, but he has practiced at RT for less than two weeks.

"It is what it is," said Kelce. "It's the way the season goes. It's not like I'm not accustomed to changing along the offensive line. It's unfortunately something we've had to deal with over the last few years. Hopefully we've kind of hit the brunt of it here in training camp and once the season gets going we'll be pretty squared away."

Kelce is indeed correct that offensive line continuity has hit the Eagles hard in recent seasons. In 2014, for example, the starting combo of Peters-Mathis-Kelce-Herremans-Johnson didn't play a single snap together in 2014. A chart of who started each game, with replacement starters in red:

That season, a lack of offensive line continuity was a major reason for the team's inability to make it back to the playoffs.

"The disadvantages are little things, but it adds up," explained Kelce. "The good thing is the guys we're working in are all smart guys, so that will help out in terms of people knowing what they're doing with assignments. But the little techniques, the little fundamentals, the little details, I really wish we'd ironed all those out in training camp, and it's kind of compounding itself a little bit with a lot of guys who are in or out."