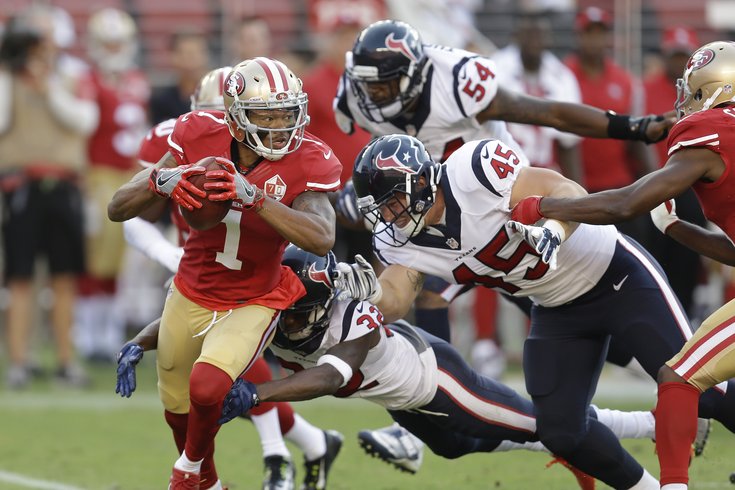 We don't have a picture of Bryce Treggs with the Eagles, so here's one of him with the 49ers.

With Philadelphia Eagles WR Josh Huff no longer on the team, the Eagles are down to just four wide receivers – Jordan Matthews, Nelson Agholor, Dorial Green-Beckham, and Bryce Treggs.

Treggs has been inactive for the Eagles' first seven games after they added him off of waivers from the San Francisco 49ers shortly after final 53-man cutdowns. It is likely that Treggs will be among the 45 active players who suit up against the New York Giants this Sunday.

"That’s the impression (I get), but you never really know until game day," Treggs said. "I’ve been out there working all week, showing the coaches what I can do, and I hope that they trust me enough to put me out there on Sunday."

The 49ers signed Treggs as an undrafted free agent from California, where he was No. 1-overall pick Jared Goff's No. 1 target. At Cal, Treggs led the team with 956 yards on 45 catches, for a lofty 21.2 yards per catch average. He also ran a 4.39 at Cal's pro day. A highlight reel:

Treggs was released by the 49ers, another team like the Eagles that lacked playmakers at wide receiver. Treggs said the Niners told him they cut him because he was injured.

"They just said they hadn't seen enough of me," Treggs explained. "I played two, really one and a half preseason games. I got injured before halftime in my second preseason game. I'm grateful to be here."

Treggs added that he was completely over his injury after the Eagles’ bye week. He has practiced since before the Chicago game Week 2, but he said that he was not 100 percent at the time.

The Eagles have lacked a player who can take the top off the defense this season, as their deep passing game has been nearly non-existent. Treggs could potentially bring that element to the Eagles' offense.

"I’ve been playing fast for a while," said Treggs. "Sometimes you get dudes who run a 4.4 or a 4.3, but you turn on the film and they’re not really playing as fast as that shows. I’m going to run 100 miles per hour on every play. That’s what it really comes down to; not only having a fast 40, but playing fast on the field."

If indeed Treggs can actually run 100 miles per hour, that means that he can run a 0.82 40, in which case I have to question the Eagles’ decision not to play him sooner.