The online auctioneer says the listings violate its ticket policy 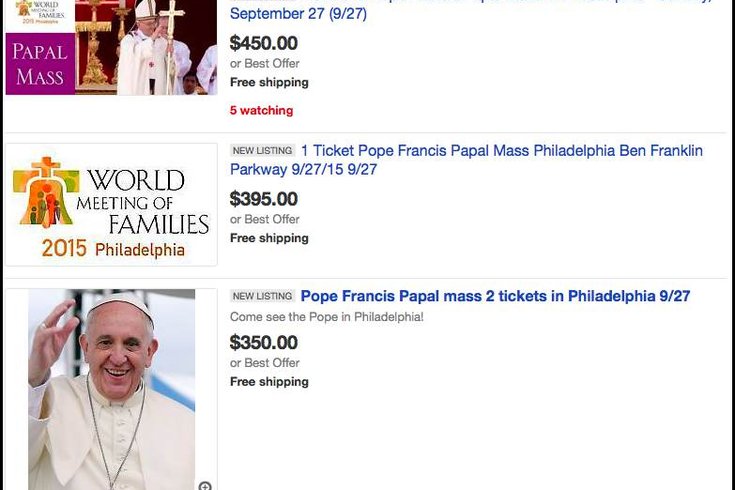 eBay says it is removing listings for free papal tickets because they violate its ticket policy.

The dozens of people trying to sell free papal event tickets on the secondary marketplace are going to have some tough luck — at least if they are hawking the tickets on eBay.

The online auctioneer is removing the listings because they violate its ticket policy, eBay Senior Manager Ryan Moore told PhillyVoice.

eBay lists the following paragraph regarding free events in its ticket policy:

"Most tickets to events where all tickets are free to the public are not allowed. However, eBay may consider requests from event organizers whether to prohibit the sale of these tickets. Examples include, but are not limited to, charity events, religious events, memorial services, and school graduations."

Ken Gavin, spokesman for the Archdiocese of Philadelphia, released a statement Wednesday saying papal tickets never were intended to be sold. Event organizers requested eBay and Craigslist remove any listings for papal tickets.

"We made reasonable efforts to provide for ease of registration for the free tickets while preventing scalping or hoarding," Gavin said. "When we became aware of tickets being sold, we reported the matter to local law enforcement. We also reached out to eBay and Craigslist asking that any sale of papal tickets for events in Philadelphia on their sites be halted. We are delighted to see that eBay has halted sale of these tickets citing a violation of its policies.

"The visit of Pope Francis is meant to be an experience open to all. Scalping of tickets for papal events is shameful and reprehensible."

Event organizers made 10,000 free tickets available online to each of the three public events featuring Pope Francis — an immigration speech at Independence Mall, the Festival of Families and a papal Mass. They all were claimed within minutes of becoming available at different times on Tuesday and Wednesday.

Tickets to the Independence Mall event became available at 4 p.m. Tuesday. Within hours, they were being sold on the secondary marketplace. On eBay, prices ranged between $125 to nearly $500 per ticket. One eBay user listed 10 tickets, despite event organizers limiting any individuals to four tickets apiece.

The tickets also are selling on Craigslist at prices similar to those seen on eBay. Craigslist did not immediately return a message seeking comment.

Gavin released a statement Tuesday saying any tickets sales are not sanctioned or authorized by the World Meeting of Families or the Archdiocese of Philadelphia.

"We would hope that anyone who acquired a ticket to Independence Hall would have done so with the intention of being part of this historic event with Pope Francis and not to sell it," the statement said. "That being said, we live in a free-market economy and just as we cannot control the rates at which individuals rented their homes to pilgrims, we also cannot control whether or not they decide to sell these tickets."

Mayor Michael Nutter also had strong words for those hawking the tickets, saying "it's pretty ignorant."

"Pope Francis comes to Philadelphia to speak on immigration and religious freedom," Nutter said. "You get a free ticket and then throw it up on the site and try to sell it. At least in the neighborhood that I grew up, that's trifle. It's just trifle. ... That's just wrong."

Similar scenes played out on Wednesday, when the WMOF released tickets to the Festival of Families and papal Mass. Tickets immediately began appearing on eBay and Craigslist, at prices similar to those sought for the Independence Mall event.

The World Meeting of Families also is distributing an undisclosed number of tickets to the 219 parishes within the Archdiocese of Philadelphia and Catholic Social Services.